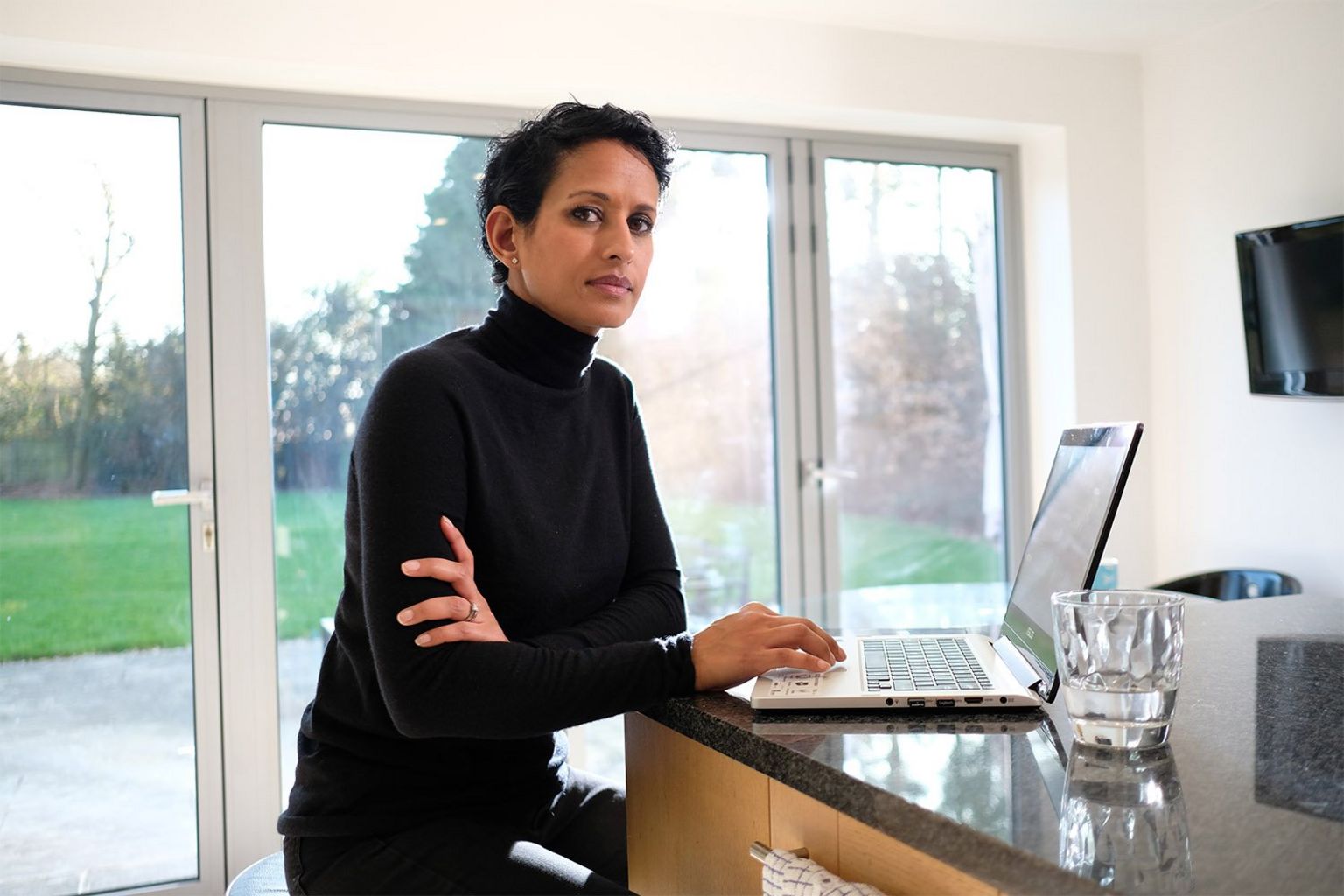 The killing of George Floyd last year triggered a national debate about racial injustice not just in the US, but in the UK, too. Naga Munchetty travelled across the UK to understand what race and racism means today.

I have experienced racism. You never forget the first time you hear that painful and distressing word. I was seven, when someone I thought was a friend at school, told me we could no longer hang out. They used the P-word, making clear the reason was because of the colour of my skin

The sense of shame was overwhelming. I was told I didn’t belong when up until then I assumed I did. From that moment I knew I was seen as different. That first hurt never goes away.

I grew up in south London. My dad was from Mauritius and my mum was from India. Both were nurses. They too received racial insults at work, including the P-word.

News events last year catapulted the subject of race into many conversations people were having.

Whether you attended, agreed with, or condemned the Black Lives Matter protests – I imagine a conversation in your social group or your home, took place about race, regardless of the colour of your skin.

The death of George Floyd, after being restrained by US police, led to Black Lives Matter protests across the world. In the UK, thousands took to the streets in the biggest anti-racism protests for decades. In Bristol, a statue of slave trader Edward Colston, which was prominent in the city for more than 125 years, was pulled down. Protests in support of the Black Lives Matter movement continued for months.

Twenty-year-old Corey, who was born and raised in Bristol, went along to a BLM protest. He’s a semi-professional basketball player who told me that he doesn’t “feel that comfortable as a black man in our society”. When I asked him why, he said because he cannot show all of his personality outside his home. He has been brought up not to be too loud, or too passionate, or come across as intimidating.

Since he was small, his father Vernon – who represented Great Britain at the 1988 Olympic Games and was a member of the Gospel choir which sang at the wedding of Prince Harry and Meghan Markle in 2018 – told him that he needed to be more aware than his non-black friends, about how he is perceived at school or out in public.

Corey says his dad told him that the rules were not going to be the same for him.

“The reality is we live in a time and place which like it or not, isn’t equitable in terms of how races are perceived,” Vernon explains. He never wants his son to be stereotyped as an angry black man, or as someone with a chip on their shoulder. He acknowledges it is sad that he has to have a conversation with his son asking him not to draw attention to himself. It’s not one he thinks a white father would have to have with his child.

Corey understands that he and his brother Taylor can’t show everything of themselves. I understand that, and I don’t like the fact that I’ve lived by those rules too. It hurts Vernon to see that his sons have had to do the same thing.

Corey doesn’t feel that racism today is as bad as when his grandmother first came to the UK from Jamaica. Still, he thinks that “things are not where they need to be”.

You can watch Naga’s Panorama programme on Monday 8 March at 19:00 GMT on BBC One, or afterwards on BBC iPlayer.

Corey’s grandmother Hermie was part of the Windrush generation, many of whom faced a hostile reception in the UK in the early 1960s. It was while working as a nurse for the NHS shortly after she arrived that she experienced blatant racism for the first time. A patient told her while she was trying to clean her, “Don’t touch me, you black creature.” She has never forgotten that.

When I asked her if she was surprised that her grandchildren still see evidence of racism 60 years later, her resigned response was, “It’s as though nothing’s changed”. She constantly reminds her grandchildren that they have to be “twice as good as [their] white counterpart”.

Many families of colour have been having these conversations – for them, it’s an everyday consideration.

I also met Jason, a black man born and raised in east London. He remembers his mum being chased by the National Front and shot with a pellet gun in her leg. He says she still has a scar. He tells me that the racism he experiences today is different, not as overt or blatant, but more under the surface, and no better. “There’s no way you can feel or live my life unless you have that shade of skin.”

Like Vernon, he is preparing his son for life as a black male in Britain.

Jason first began to talk to Ezra about how to behave outside the home, when he was just nine years old.

Jason tells Ezra, who is now 14, not to wear all-black clothing. That way it’s harder for him to match a generic description and be stopped by the police. If Ezra is stopped by the police, Jason has prepared him for how to behave. Ezra tells me what he has been taught – “Just be respectful, keep composed”. He adds that he knows he will be stopped eventually, “because of the colour of my skin”.

Jason thinks Ezra will eventually have to have similar conversations with his son when the time comes. “Unfortunately he will,” he tells me.

When I asked Jason what he would like to see change – his answer was simple: “Let me speak first, then judge me. Don’t judge me before I speak.”

Jason’s sister Frankie, 33, is a receptionist. She spoke to me about the kind of racism she experiences.

This type of covert racism isn’t uncommon but it’s difficult to prove, says Professor Kalwant Bhopal, director of the Centre for Research in Race and Education at the University of Birmingham.

“It can take the form of individuals not given eye contact. Black and minority ethnic people not even being asked their opinion. People pushing in front of you in a queue,” she says.

Despite Frankie’s experiences, she also told me about how she believes it is important for the young black women she mentors to not hide their identities in order to fit in, and their lives should be celebrated not compromised.

I questioned why these conversations need to take place in the 21st Century. She said: “I may not be experiencing racism in the same [way] as my mum, I think it has changed, but it’s a really slow change.”

Everyday racism isn’t obvious and it’s hard to explain. It’s like when someone asks you, “Where are you really from?” That’s telling. It makes me feel that I’m the other, that I don’t belong. If I call it out, I’m being difficult. It chips away at you.

Stephen lives in Blyth, Northumberland, which is 98% white. He told me that he followed the Black Lives Matter protests and understands the raw emotions around police brutality.

As I sat by the harbour with the warehouse worker and his dad John, a retired mining engineer, he said he supported the right for people to protest – but he was concerned when some elements turned violent, and caused criminal damage. He then found it difficult to carry on backing the movement.

John said until this year, he never thought about race, and had never had a conversation with anyone about racism other than with his son. He says that’s because it’s something that has never touched his life.

Unemployment is 7% in Blyth, higher than the national average. John has concerns that the push for diversity after the Black Live Matter protests could impact jobs. He’s worried if the government were to introduce quotas for apprenticeships that would mean “you’ve got to have a certain colour skin. Is that the way forward?”

While some companies do have diversity targets, it’s against the law to hire a less suitable candidate just because of the colour of their skin.

Steve admits he knows people with racist views, and that makes him cringe, and sometimes upset. He says people need to challenge their thought processes – it’s something he does himself. “It’s about exploring different viewpoints.”

Alum Rock is one of the most deprived parts of Birmingham. Almost 60% of those living there are of Pakistani heritage

He helps young people in his area by giving interview tips to some local students.

“You can accept that you may not have the same opportunities that other people have, but you can either be miserable and say, ‘I’m not working from a level playing field’ or you can say, ‘I’m going to do something about it,’ and that’s why we’re here to try and help.”

Asian students I met in Birmingham told me they are proud of being British and of their heritage – wearing traditional clothes with pride and not embarrassed that their home lives are different from White-British students.

One student, Zahnab, told me: “I think over the years I have accepted my culture. I realise that I’m always probably going to be different. One day I might come in and smell of my mum’s curry – I just embrace it.”

I remember being paranoid about smelling of the curries my mum cooked when I was at school. That’s something I had conveniently forgotten until I spoke to the students.

I was heartened to see that they have no sense of that embarrassment. They say to me: “My food smells good, of course my clothes may smell a bit of it, but what’s to be ashamed of?”

I know what it’s like to hide parts of my whole self, to play down my Asian heritage – It’s difficult to acknowledge that I’ve done it, and hard to admit. Since I was young, I felt I needed to, so that I fitted-in more easily.

The conversations I have been part of have been honest and sometimes painful. People opened up about race and racism, and voiced their fears and frustrations. It feels different to the way I’ve heard people talk about it before.

All photographs subject to copyright.