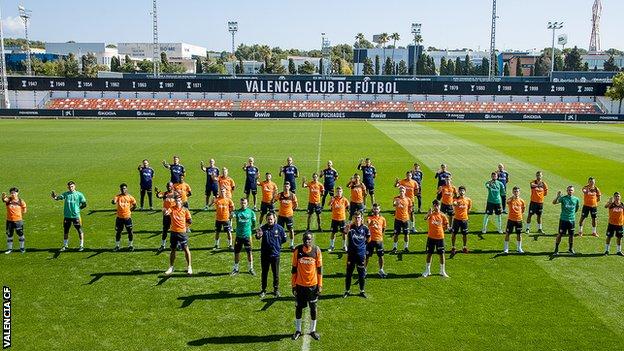 The alleged racist abuse of Valencia’s Mouctar Diakhaby was “two steps back in this fight against racism”, says the club’s president Anil Murthy.

Murthy said the response was “more worrying” than the incident itself and protocols must be changed.

“If the starting point in the fight against racism is proof that this happened before we take any action, then we are not protecting the vulnerable.

“So yesterday, for me, it was a case of taking two steps back in this fight against racism.”

Diakhaby reacted furiously after a first-half clash with Cadiz’s Juan Cala and spoke with the referee.

The Valencia players left the field in protest but Diakhaby asked his team-mates to return and they resumed the game – although they did so without Diakhaby, who was substituted.

“The rules are very clear, if you don’t play you lose the game plus you have abandon the game and lose another three points,” Murthy said.

“Diakhaby, when he realised or was told the consequences of not going out, he said ‘look guys, let’s go out and fight. I can’t do it any more, but you guys go out and fight. We are not exactly top of the table and these points are important’.

“Yesterday, for us, that message sent out from the football community is do whatever you want if you don’t get it on camera.”

Cala told reporters at Cadiz’s training ground on Monday he will not hide from accusations and will hold a news conference on Tuesday.

“It seems like the presumption you are innocent before proven guilty doesn’t exist in this country,” the Spaniard said.

Murthy said he had spoken to Diakhaby who is “still very affected”.

“I think clubs must educate their players, clubs must go very hard on violence in stadiums – violence includes not just physical acts of violence, but racial abuse and violent abuse on social media,” Murthy added.

“Everyone has their role to play. We must all educate more seriously, make a more serious effort in educating footballers and take serious action against fans that believe anything goes.

“If all the clubs don’t come together to do this, well then talk can only do so much.”