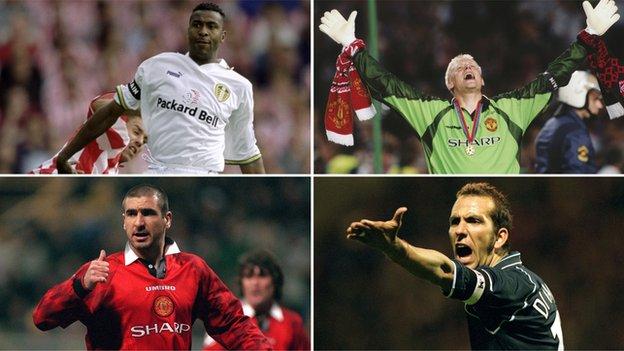 What constitutes a bargain? It’s a good question, and as Gary Lineker says at the start of the latest Match of the Day: Top 10 podcast, you probably won’t agree with his panel’s selections and you definitely won’t agree with the order.

The subject of Premier League transfer bargains has been discussed by Lineker, Alan Shearer and Micah Richards, and their choices are listed below. The key criteria was players that were essentially “pinched from their club”, rather than being cheap or a free transfer!

To hear how they made their final selections, make sure you listen to the podcast on BBC Sounds and you can rank yours at the bottom of the page too.

Left-back Andy Robertson joined Liverpool from relegated Hull for £8m in 2017. The Scotland international has gone on to win the Premier League and Champions League, while making 124 appearances for the club. He has scored four goals and assisted on 33 occasions.

Richards: He was a great buy. I remember watching him in the 2016 Championship play-off final for Hull and you could tell he was going to be a top player. I always look at full-backs and whether they can defend or attack, and he can do both. He can press and read the game well – he can absolutely do everything. I still wouldn’t take him over Trent Alexander-Arnold though.

Shearer: He very rarely misses a game – he is relentless and just keeps playing. I remember a few years ago, Ian Wright saying in the Match of the Day office that he’d seen him play a few times, and he was going to be a top player. He had a shocker that day and we gave him a caning. Every time we see him now, he’s like “I told you about him”.

Paolo di Canio joined West Ham from Sheffield Wednesday for £1.5m in 1999. He went on to score 51 times in 141 games in all competitions for the Hammers and struck what is widely considered one of the great Premier League goals with a dipping volley against Wimbledon in 2000.

Richards: It was a few quid, but he lit up the league. There were fireworks, and I used to love watching him. He was just sensational and at that price it is just a bargain. We like characters, don’t we? You can’t express yourself these days – they have taken away everything.

Shearer: We shouldn’t laugh, but I’m sure we will. Do you remember the incident with the referee Paul Alcock? He was a maverick, and definitely different.

Lucas Radebe joined Leeds United from South African side Kaizer Chiefs in 1994. He moved as part of a £250,000 deal that included Phil Masinga, and was only signed originally to help his compatriot settle, but ended up being the better investment. Radebe made 236 appearances in an 11-year stay at the club.

Shearer: He struggled with injuries, but what a bargain. He was reliable, quick, and could play. It was for nothing – they literally nicked him.

Richards: The fact he came as part of a deal makes it even better. He was fast, strong and intelligent. If you speak to any Leeds fan, they say he is the best centre-half they have ever had. But they didn’t win anything, so that is why he’s eighth on my list.

Algerian Riyad Mahrez joined Leicester City, then in the Championship, from French club Le Havre for £450,000 in the 2014 January transfer window. He helped the club get promoted that season, and stay up, before playing a pivotal role, scoring 18 goals and assisting 10 more, during their title-winning campaign in the 2015-16 season. Mahrez was sold to Manchester City for more than £60m in 2018.

Richards: He frustrates me at Manchester City a bit. He has got the best touch ever, and then he messes around. He could score 25 goals a season. He dilly-dallies a little bit too much for me. He likes to showboat a little bit, rather than just being potent.

Shearer: He is brilliant. The thing with Mahrez is that most of the time we and defenders know what he is going to go, but not many people can stop him. He does it so well, and so quickly, that it can be impossible to stop him.

Republic of Ireland right-back Seamus Coleman was bought by Everton from Sligo Rovers in January 2009 for £60,000. He has gone on to make 342 appearances for the Toffees, scoring 26 times and laying on another 30.

Richards: He should probably be further down the list but he hasn’t won anything. I like my bargains to win something. In terms of consistency of performance he is right up there, but he doesn’t get the assists that Trent Alexander-Arnold or Andy Robertson get, so that’s why he wouldn’t be further down my list.

Shearer: There isn’t any harm in not winning anything, Micah! He has had a serious injury, but the number of games he’s played for the fee says it all. The Everton fans love him.

Netherlands striker Robin van Persie joined Arsenal for £2.75m from Feyenoord in 2004. He scored 132 times in 278 games for the Gunners, but only won the FA Cup. He was sold to Manchester United for £42m in 2012 and won the Premier League in his first season.

Shearer: He was a phenomenal goalscorer. He used to bury chances for fun. He was quick and had a great shot on him. He used to get it away so quickly too. He was just a brilliant player and delivered performances and goals.

Lineker: He was a brilliant striker. Do you remember when we did the Top 10 strikers and he didn’t make it in? I always thought that was a bit unfair. He was missing nothing in my opinion.

Centre-back Kolo Toure joined Arsenal from Ivorian side ASEC Mimosas from £150,000 in 2002. He was part of the Invincibles team that won the Premier League in 2004, and also lifted the FA Cup twice during a seven-year stay. He then had spells at Manchester City, alongside Richards, Liverpool and Celtic and is now part of Brendan Rodgers’ coaching staff at Leicester.

Richards: He was the nicest man ever, and he worked hard. He was a great leader. I didn’t expect him to become a coach though, he never did anything after training. He was more the ‘arm around your shoulder’ kind of guy. I’m glad to see he is a coach though.

I expected a little bit more from him player wise, though, to be honest. He had everything, but we were going through a bit of transition and he was one of the big hitters, but maybe he was just slightly past his best then. He was top-notch at Arsenal though.

Shearer: For the appearances, and the number of years he played, it was an unbelievable bargain.

Danish goalkeeper Peter Schmeichel joined Manchester United for £505,000 from Brondby in 1991. He played 398 games for Sir Alex Ferguson’s side and was part of the treble-winning team in 1999. He won 15 trophies during his eight-year stay at Old Trafford, including five Premier League titles.

Shearer: Look at the influence he had and what he did for the club. It was the size of him. He was a character and a giant of a player.

Richards: He used to come and watch Kasper train at Manchester City and he was a giant of a man. He would never smile, though – he just used to look at you. I work with him now on Champions League nights, though, and he is the nicest guy you could ever meet.

France striker Eric Cantona joined Manchester United from Leeds United for £1.2m in 1992. He won nine trophies during a five-year stay, and scored 82 goals in 185 appearances for the club.

Richards: He just has to be number one – £1.2m for him? I just loved him. He is just the man and is so iconic. Growing up as a kid everyone used to have their collar turned up, thinking they were him. He’s got everything. He just edged out Vardy for me because of the number of trophies that he won, and the song may have helped.

Shearer: He was arrogant, but he could be with the ability that he had. If we put him at number one, I wouldn’t argue because of what he achieved, what he did and the respect he earned.

Striker Jamie Vardy was still playing non-league football for Fleetwood in 2012, before a £1m move to Leicester City, who were in the Championship at the time. He’s gone on to score 144 goals – 115 of which have come in the top flight – in 342 games for the Foxes and won the Premier League in 2016.

Richards: He probably should be number one. He’s always played the same way, all the way through his career, and that is so important. I love the fact he still runs in behind, but he makes intelligent runs and he lures you into a false sense of security.

He tried to outpace me once when I was at Villa, so I just shoved him off the ball, and gave him a little wink. After the game, he just winked back at me because they’d won. He is just ridiculous – I won the battle up to the 70th minute but he just keeps going. He is relentless.

He was absolutely unreal in the title-winning campaign too.

Shearer: To come from non-league football, to be one of the best strikers in the best league in the world in my opinion, is just phenomenal. It just gives everyone who plays at that level hope.

It is one thing getting there, but it is another thing staying there because everybody knows his game and what he is good at but there are not many people who have been able to stop him. It is a great story.