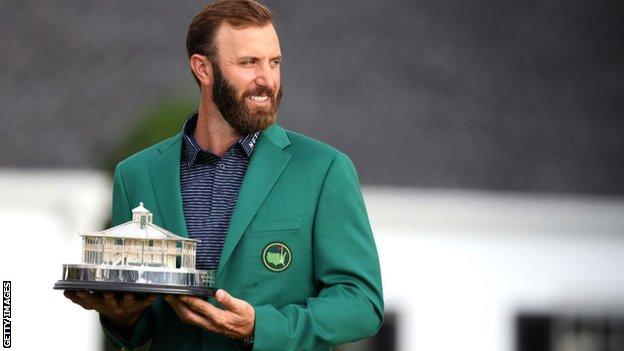 It was the moment the poker face slipped and the raw emotion seeped through.

Dustin Johnson, standing on the putting green at Augusta National, trying to put his achievement into words, realised the enormity of what had just happened and the usually immovable American found himself fighting back tears.

Minutes earlier, Tiger Woods had slipped the Green Jacket over the world number one’s broad shoulders after he clinched his first Masters title in record-breaking fashion.

This was always top of the 36-year-old’s personal checklist, the major he dreamed of winning while growing up an hour’s drive away in Columbia, South Carolina.

“It moved me and I have known him forever,” Johnson’s trainer Joey Diovisalvi tells BBC Sport. “I was very compromised emotionally to see him show that side of vulnerability.

“It humanised him, because everyone thinks he has no emotions, he’s so stoic on the golf course but that’s not the case. He’s just very composed, he’s in control of himself.”

Johnson, with brother Austin on his bag and his family all sharing a house for the week, looked completely in control of the outcome from the moment he joked in the build-up about the Masters sandwiches being his favourite Augusta tradition.

“There was a sense of calm. He just was on this very controlled path every day to understand where his game was,” explains Diovisalvi, who was also staying with him.

Johnson, a Sports Management major from Coastal Carolina University who turned pro in 2007 and won his first PGA Tour event the following year, always had the potential to be one of the game’s most talented players.

But, until five months ago, his only major title was the 2016 US Open, which was clinched after failing to get off the mark despite holding a 54-hole lead on four previous occasions.

There were agonising misses at the US Open and US PGA Championship in 2010, The Open in 2011 and then, after a year out to seek professional help for “personal challenges”, a three-putt on the 18th at the 2015 US Open that handed Jordan Spieth the title.

Diovisalvi has observed a growing maturity in Johnson and that was epitomised by his five-stroke Masters triumph.

“Maturity has played a huge role and I really admire that, as I have watched him grow up from a boy to a man to a grown man,” says the biomechanics expert, whose job it is to prime Johnson’s body for peak performance.

“He’s not ultimately as affected by what other players are affected by. That’s the difference, you see him continue to be very confident in what he’s doing, he stays in his lane quite a bit.

“His communication is good, his ability to understand where he is in his body and his golf swing and his mind is pretty solid. He’s got a lot of good balance in his personal life with the boys and Paulina.”

In an interview with BBC Sport, Johnson explained how his mindset does not change whether he has had a great round or a bad one.

“If there’s something I feel I didn’t do particularly well that day I’ll go to the range and try to work it out,” he says. “But I’m not going to be angry or upset and when I’ve played really well I’m not jumping up and down in the locker room either.

Johnson’s coach, Claude Harmon III, told Golf Digest recently that the player’s attitude is the best in the game and that other than Jack Nicklaus and Tiger Woods “you can make an argument that he has the best mind in the history of golf”.

That mental resilience is complemented by Johnson’s physical presence, something that has also evolved as his body has matured.

“He’s not somebody who’s backing off physically at 36. He’s going to be a specimen like Vijay Singh was well into his 40s, because he has that athleticism and ability,” says Diovisalvi.

‘He loves trash-talking with MJ’

Johnson finds himself in an environment where he has athletes who have defined their respective sports to bounce off, including father-in-law and ice hockey icon Wayne Gretzky.

A day before our chat with Diovisalvi, speaking from his facility in Jupiter, Florida, Johnson had been playing golf with Michael Jordan at the NBA legend’s exclusive custom-built course, The Grove XXIII.

“Dustin enjoys that MJ is somebody who created this environment where they can just wear their golf shorts and t-shirts and go play golf – there’s no formality up there,” says Diovisalvi.

“They love to trash talk and have their games and I believe that actually gives Dustin more of a confident edge when it comes to tournament play.

“When you have these great athletes – they might be great in different arenas – but they get together on the golf course and there’s a lot of ability for them to speak amongst themselves.

“I think Dustin takes these little bits and pieces and then puts it in his head. He is confident to a degree where he doesn’t walk out arrogantly on a golf course, but is always going to be someone who can tee it up and potentially put another ‘W’ in that column. I think he’ll play until he can’t do that anymore.”

Johnson admits there is just a small, close-knit group of people that he trusts for advice.

“I don’t ask anybody’s opinion nor do I listen, other than my team,” he explains. “I’ve got a great team with Joey D, Claude, so if they’re offering me advice, yes I’m going to listen but anyone else – don’t ask and don’t listen.”

Only Woods and Greg Norman have spent more than Johnson’s 121 weeks as world number one. Heading into his late 30s, he knows what works for him.

Johnson began looking at his statistics a few years ago and decided he needed to work on his game inside 150 yards. He now spends 90% of his practice time on his wedges and putting.

He also understands the role of sports science and Diovisalvi takes pride in watching his charge convert the work they do together into performances on the course.

“You see that he can play golf differently than he did when he first started, because he has this ability to understand the physicality of the game and how it’s changed,” he says.

“He does that with a lot of confidence and I’ve watched that change over a decade, it’s pretty impressive. He’s willing to keep giving and giving.”

Underpinning everything the American does is a sense of humility and sincerity.

“Dustin has never checked out of who he is as a human being,” adds Diovisalvi. “As a golfer he’s Dustin Johnson, but as a person he’s still the same guy who calls you up and goes ‘what kind of breakfast sandwich do you want?’.

“Dustin is still someone that wants to sit around the table and talk about everyday life, like ‘when are we going to go fishing?’.

“The night we had the celebration after the Masters, it was pretty intimate, he was very vocal about how much it meant to him. He is that humble he was willing to say ‘I couldn’t do this without you guys’ and put us in a place where we all shared the moment with him.”