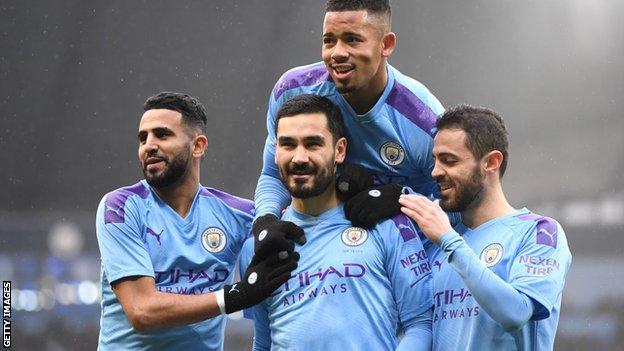 One remarkable element of Manchester City’s bid for an unprecedented quadruple this season is that, for the most part, it has been the brilliance of the team that has stood out, rather than any one individual.

Pep Guardiola’s side could quite conceivably win all four competitions they are in and yet it is not a certainty one of their squad will claim the player of the year award, because the excellent displays by the likes of Ruben Dias, Ilkay Gundogan and Phil Foden might split the vote.

Whatever happens between now and the end of the season, though, there can be no doubting the role Gundogan has played in taking City to within sight of what would be English football’s greatest achievement.

For a player rejected by his hometown club aged eight because he was considered too small, his growing influence – 12 goals in 23 Premier League games – has been at the heart of the club’s revival following a disappointing 2019-20.

He will once again be a central figure for City in the Champions League on Tuesday as he comes up against Borussia Dortmund, the team where he really made his name on the European stage.

Bouncing back from early rejection

That early rejection by Schalke could have derailed Gundogan’s career but he left the disappointment behind at neighbours Bochum, where he would work for the first time under youth coach Michael Oenning.

“Deep in his heart he was always Schalke and he wanted to play for Schalke, but they sent him away because he wasn’t tall enough and this was the reason for him never going back,” Oenning tells BBC Sport.

“In the first training session [with Bochum] we tried crossing and he did them right and left-footed, and afterwards I asked if he could do this with backspin and he could, and it was fantastic. I immediately said to him: ‘I think you will be a professional football player.’ He was looking back at me and saying nothing but in his eyes I could see they were really on fire.”

Gundogan’s technical ability came naturally, but his skills were honed on the streets of Gelsenkirchen.

“Ilkay trained with passion but it was all so easy for him as his technique is so good and he can solve all of his problems on the pitch with technique,” adds Oenning. “He was not talking so much but he was playing great football and everyone respected him because of his skill.”

Oenning became a mentor for Gundogan, taking the midfielder to Nuremberg when he left to become the Bundesliga side’s manager. Gundogan went on to help keep the team in the league, scoring in the relegation play-off against Augsburg.

“After half a year [at Bochum], Ilkay called me and said ‘I want to finish my school but I can’t do this here’. I picked him up for Nuremberg and his father said to me he has to finish his school as well. To play in the Bundesliga and finish schooling is not so easy but we found a way. He went to school and made fantastic exam results, while also starting to play football in the Bundesliga, so it was a great time, as he was really focused on both.

“He knows where he comes from, he was not born with a golden spoon in his hand, so he learned what it means to survive and that education is the most important thing.”

Oenning used Gundogan as a number 10 at Bochum and Nuremburg but his immediate future lay elsewhere in midfield, dropping deeper for the national age-group teams and later at Dortmund, which explains why he averaged a goal every 10 games in Germany.

Oenning would go on to take charge of Hamburg and tried to take Gundogan with him, but Dortmund came calling and the midfielder could not turn down the opportunity.

Finding a new role under Klopp

A fee of around 4m euros was agreed to take Gundogan to Signal Iduna Park, where he signed a four-year contract in 2011.

Chris Lowe also signed that summer, joining a club that had won the Bundesliga the previous season under Jurgen Klopp, meaning it was not easy for youngsters to break into the first team.

“The first six months were quite difficult for him but he just kept going, training well, developing his game and in the second half of the season he was consistently playing week in, week out,” former Huddersfield defender Lowe explains.

Naturally, there is always going to be a step up when a young player joins a club the size of Dortmund, especially during one of their golden periods, and Gundogan had to adapt to Klopp’s intensity.

“He worked quite often in the gym to get stronger,” adds Lowe. “He needed to be strong and really fit, which is the main part he worked on to fit in with the style of play and be in the shape to play 90 minutes.

“He was always quiet and a bit shy. He was a calm guy, he just tried to achieve what he wanted by working hard. He was not a guy for the nightlife, he was just focused on the job and trying to get better.”

Gundogan was used in a deeper ‘number six’ role by Klopp and he adapted well, becoming a key part of Dortmund’s Bundesliga and cup triumphs, with a personal watershed coming when he struck a 120th-minute winner in a German Cup semi-final against Greuther Furth, one of just 12 goals in 140 appearances for the club.

“He came from a smaller club and you have to show what you can do to earn the respect from the other players and that was a turning point where he showed everyone that he’s able to do something special and that he’s a player with big qualities,” says Lowe.

In the following campaign, Gundogan was instrumental in helping Dortmund to the Champions League final, scoring a penalty in their defeat by Bayern at Wembley. The two trophies won in his first season at the club would be his only major ones in yellow, as Bayern’s years of dominance began, including three league titles under a certain Pep Guardiola.

Establishing himself as a ‘top player’ at Man City

Having seen Gundogan at close quarters in Germany, Guardiola, now at Manchester City, earmarked him as a perfect player for his style and Oenning says player and manager have gone on to form a “special relationship”.

But it was not a straightforward start to life in England for Gundogan. City paid £20m for his services in June 2016 but he was still recovering from a dislocated patella – one of numerous injuries which have included ruptured cruciate ligaments and a back injury for which a doctor wanted to insert a metal screw into his spine – and so did not make his debut until mid-September.

“When you arrive injured it is more difficult to integrate into the team as the training helps a lot to speak with the new team-mates, so it was difficult for him,” says former City midfielder Aleix Garcia.

Gundogan’s mark was made in October, when he scored twice in consecutive games, including a Champions League double against Barcelona. Once again the German had been forced to fight his way into the team after a slow start.

“To play alongside him was easy because he likes to play a lot of football, to play short, one-touch, possession stuff,” said Garcia. “I enjoyed playing with him a lot, as I like to play like this, so we complemented each other very well. It was a pleasure to train and play with him.”

In those early days Gundogan was in a deeper role, before the cruciate injury suffered in December curtailed his first season in England.

“Pep tried to ask him for the same football he played at Dortmund but he had a little bit of a problem with the injuries,” says Eibar midfielder Garcia. “But now he’s one of the most important players at City,”

Gundogan has already won six major trophies at City and the current campaign is, arguably, the finest of his career. In addition to his goalscoring exploits, he has captained his country and won back-to-back Premier League player of the month awards.

“It is easy because he improved a lot during these years and everyone knows how Gundogan is as a player,” says Garcia, “But he has more to show as he has a lot of qualities with the ball. Physically he is ready to play games at 100%; all the players in the world, they can only say that Gundogan is a top player.”