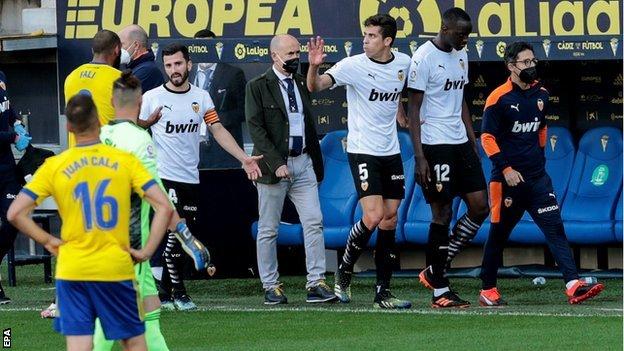 Cadiz defender Juan Cala has denied he racially abused Valencia’s Mouctar Diakhaby, saying he has been caught in a “media circus”.

On Tuesday, Diakhaby posted a video on social media saying he was “very hurt” and wants La Liga to sanction Cala.

“I was judged before the game was over,” said Cala.

“What has happened is a media circus.”

He claims he only told French defender Diakhaby to “leave me in peace” following a clash for the ball.

The 31-year-old says he was judged too quickly after Valencia became the first team in Spanish football to leave the field in protest.

“The best thing would have been to get me and (Diakhaby) together in a room to explain what happened,” Cala said. “Instead, it’s been a circus.

“We’ve been playing in stadiums without fans for more than a year. There are 20 or 25 cameras around, who knows how many microphones, and no-one heard (the insult).

“So at the very least let me have some doubt about what happened.”

“If the starting point in the fight against racism is proof that this happened before we take any action, then we are not protecting the vulnerable,” Murthy told BBC World Service.

Murthy said Valencia “believe Diakhaby totally” and in response to Cala’s news conference on Tuesday the club tweeted to say “Juan Cala, we don’t believe you”.

“Cala has missed a great opportunity to accept his mistake and apologise,” they said in a statement, adding they were “deeply saddened” by the player’s subsequent remarks.