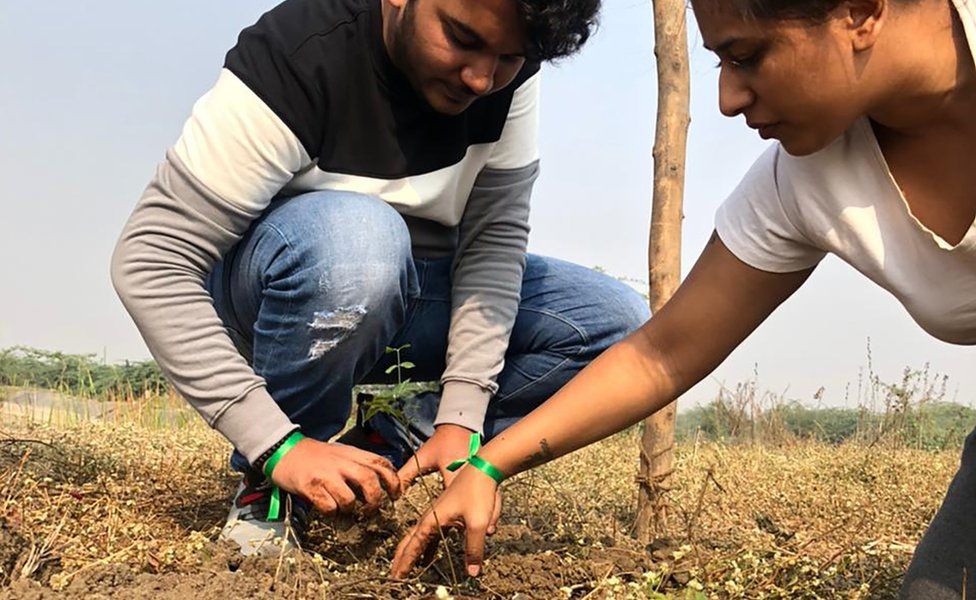 Like many other people, Danielle Smissaert has done voluntary work during the pandemic.

When not in her day job for a Dutch bank, the 35-year-old has been part of a team that delivers groceries to people isolating at home in Amsterdam.

“Volunteering gave me a concrete way of contributing to fight Covid-19 and give back to society,” she says.

Ms Smissaert’s story is replicated in lots of countries, with one UK report last summer saying that in response to the lockdowns the country now had a “volunteering army” of 10 million Brits “supporting local communities and helping vulnerable people”.

However, much of this volunteering was entirely informal, such as someone helping an elderly neighbour, rather than people officially signing up with a charity.

For more formal arrangements within the UK’s charity sector though the picture was more mixed. While 35% of such organisations say they have seen a decrease in the number of people volunteering over the past year, 20% saw a rise, and 45% no change, according to the latest figures from NCVO (National Council for Voluntary Organisations).

This has come at the same time as the NCVO said there was more demand on charities’ services, and several other studies say charities have seen a fall in income as a result of the pandemic.

So how can charities both engage more volunteers, and raise more funds to meet the continuing increase in need for their services? A number of tech firms believe they can help.

Deedmob, an Amsterdam-based small firm, says the way to get more young adults volunteering is simply to make it easier for them to do so.

Founded in 2016 by three student friends, its website and app matches people’s skills and interests with volunteering tasks and causes, and allows them to volunteer for short periods of time rather than have to make long-term commitments.

“A lot of people want to do some volunteering next to their job, or while they study, but before they couldn’t find the right opportunities at the right time,” says Deedmob co-founder and chief executive Boudewijn Wijnands.

Ms Smissaert has done voluntary work for the past seven years, everything from helping people find jobs, to assisting newly settled refugees, and the more recent delivering food shopping. She has signed up to Deedmob, and says it has been very useful.

“I can imagine that if it’s so easy to engage with, it’s also easy to disengage from,” she says, “but it’s so amazing that people are giving their time to the website, so it’s still a win.”

Regarding volunteering in general, Ms Smissaert adds: “We have to create our own special value in the things we do on a daily basis.”

In addition to its main platform, Deedmob created a special website last year called Coronahelpers.nl that focused specifically on volunteering work related to the pandemic and lockdowns.

It mobilised volunteers to help 25,000 people in its first three weeks, and was praised by Dutch Prime Minister Mark Rutte.

The firm allows smaller charities to use Deedmob for free, either by listing on it, or using its technology on their own websites. It makes money by charging corporate clients such as airline KLM and clothing brand H&M, which use Deedmob’s software to help their employees sign up for voluntary work.

In the south-west of England, Anglican priest Rev Simon Bale uses a Deedmob-powered website called Spark A Change to mobilise and manage volunteers from his congregation in Bridgewater, Somerset.

He organises grocery and prescription deliveries, dog walking, and social chats for those in need via the website, which is run by local charity Spark Somerset.

“A greater sense of trust in the community has come out of the volunteering,” says Rev Bale. “People would give their bank card to a volunteer to do their Asda shopping.”

In the north east of England, tech entrepreneur Ashley Staines was a volunteer for Age UK in Gateshead when the pandemic struck last year. He was a “befriender”, calling and checking in on elderly people.

Mr Staines says he wanted to volunteer more of his time, but “hit the typical barriers for volunteering – lots of paperwork and long commitment clauses”.

It inspired him to launch an app called Volunteero. It is similar to Deedmob in that it breaks down volunteering into “micro-tasks”, so people can volunteer to do one-off, small things.

Mr Staines started the app and business in May 2020 with two friends. One charity already using Volunteero is North Tyneside Voda, which gives support and advice to volunteers and community groups in its local area.

Debby Flannery is one such volunteer. She helps disadvantaged families.

“One parent told me she struggles with email, and asked if I could help her receive her children’s school vouchers by mail,” she says. “I was able to help organise that a lot easier with the app.”

Mr Staines adds that Volunteero aims to engage young volunteers by “gamifying” elements of the app, and encouraging people to post on social media details of the volunteering work they have done.

“We want to make volunteering cooler by encouraging people to share their stats and their pictures doing good things,” he says.

Volunteero hasn’t charged any of their charity clients so far, but they’re switching to a pay-per-volunteer model.

Another UK tech firm helping charities is Enthuse, which has built an easy to use online fundraising platform. It makes its money by charging charities a small fee.

“We put the charity at the front of the experience, their brand is front and centre, the data belongs to them,” says Enthuse chief executive Chester Mojay-Sinclare.

A growing number of charities are now embracing technology, such as that offered by Deedmob, Volunteero and Enthuse, a report found last year. The study said that “2020 could be a pivotal moment in how charities embrace digital”, but it also cautioned that 51% of charities still don’t have a digital strategy.

Global children’s charity KidsRights Foundation and its Deedmob-powered website helps young people around the world organise their own initiatives, such as a girl in India who is leading a project to plant 5,000 trees, and a girl in Indonesia who is raising awareness about the problem of violence against women.

KidsRights’ chairman Marc Dullaert says that charities who aren’t embracing technology are “missing out on data analysis, digital communities, and they need to adapt to reach the next generation”.