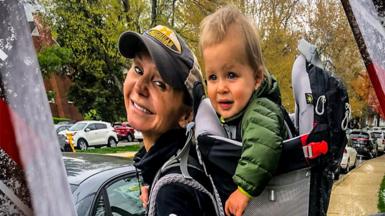 The United States will attend talks in Vienna aimed at reviving the Iran nuclear deal, which the Trump administration abandoned in 2018.

President Joe Biden has said he wants to return to the landmark accord.

But the six remaining state parties need to find a way for him to lift the sanctions imposed by his predecessor and for Iran to return to the agreed limits on its nuclear programme.

Iran has said it will not meet the US face-to-face until that happens.

The US officials attending the meeting in Austria will sit in a different place to Iran and the remaining members of the “P5+1” group of world powers – China, France, Germany, Russia and the UK. European Union officials will act as intermediaries.

“We don’t underestimate the scale of the challenges ahead,” US state department spokesman Ned Price told reporters on Monday.

“These are early days. We don’t anticipate an early or immediate breakthrough, as these discussions, we fully expect, will be difficult.”

Mr Price said the the Biden administration’s goal was to “set the stage for that mutual return to compliance”.

But Iran’s foreign ministry said the aim of Tuesday’s meeting was to “talk about the path of lifting sanctions”.

“Whether the joint commission’s agenda produces a result or not depends on the Europeans and the 4+1 [world powers] reminding the US of its obligations and the Americans acting on their commitments,” Iran’s spokesman Saeed Khatibzadeh said in Tehran.

EU mediators hope to make headway in the discussions by May, a month before Iran will hold a presidential election that they fear could lead to delays.

The nuclear deal, known formally as the Joint Comprehensive Plan of Action (JCPOA), has been in intensive care since President Donald Trump pulled the US out of it almost three years ago.

He said it was based on “a giant fiction that a murderous regime desired only a peaceful nuclear energy programme” and reinstated crippling economic sanctions in an attempt to compel Iran to negotiate a replacement.

Iran, which insists it does not want nuclear weapons, refused to do so and responded to the sanctions by rolling back a number of key commitments.

They included suspending limits on the production of enriched uranium, which can be used to make reactor fuel but also nuclear bombs.

In an apparent attempt to increase pressure on Mr Biden, it started enriching uranium to 20% purity in January and produced a small amount of uranium metal, which could be used to make the core of a bomb, the following month.