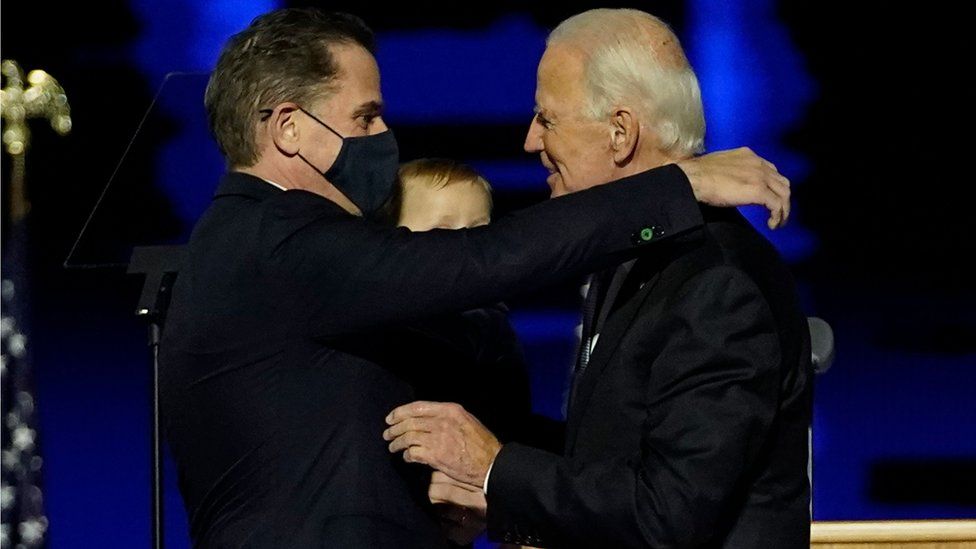 Hunter Biden, the son of US President Joe Biden, has reflected on his public struggle with drug and alcohol addiction, saying his life “is not a tabloid”.

“I don’t belong to an administration, I belong to a family,” he told the BBC.

He took responsibility for “creating a story… that anyone conscious would know would be a tabloid sensation”.

He also addressed the scrutiny he and his father faced over his work with Ukrainian energy company Burisma.

Mr Biden was a director on the board of Burisma while Joe Biden was US vice-president and the Obama administration’s point man on US-Ukrainian relations.

These business dealings made him a frequent target of Republican criticism during the 2020 election campaign, and were at the centre of former US President Donald Trump’s first impeachment.

While defending his qualifications for the position, Mr Biden said that, in retrospect, he had “missed… the perception that I would create”.

“I know that it is hard to believe with 2020 hindsight how I could possibly have missed that,” the 51-year-old told the BBC in an interview.

While no criminal activity by the Bidens has been proven, a senior US state department official raised concerns about a potential conflict of interest as far back as 2015.

An investigation by US Republican lawmakers last year found that Mr Biden’s work for the Ukrainian firm was “problematic” but concluded there was not evidence that US foreign policy was influenced by it.

Mr Biden also acknowledged that his father’s name had “opened doors that wouldn’t be opened up to other people”. But he said this had been “both a privilege and a burden”.

Speaking to the BBC ahead of the release of his new memoir Beautiful Things, Mr Biden said he wanted to write about “the love of a family and how it saved me”.

“And, you know, we’re going through two pandemics right now… there’s the pandemic of coronavirus, and there’s a pandemic of addiction too,” he said.

Mr Biden’s mother and sister died in a car accident in 1972 that he and his brother survived. In the interview, he talked about the links between the trauma he has suffered and his drug and alcohol addiction.

“There’s something at the centre of each addict that’s missing, that they feel that they need to fill… Nothing can possibly fill it. And so you numb yourself,” he said.

After his brother Beau died of cancer in 2015, he said he “descended into a really dark, dark place”.

“My brother had just died, I’d separated with my wife, I was in an apartment by myself, and I was basically drinking myself to death. It was awful. I mean, grief does funny things. And combine that with addiction and it is a really hard thing to overcome,” he said.

He added that while his struggle with addiction made him a target for tabloid stories and political attacks, it was also something that people across the country could relate to.

In anticipation of Mr Trump raising his addiction in the first election debate, Mr Biden said both he and his father “intuitively knew what to say”.

“I said ‘Dad, you know, this is our story. And it’s a story of love. It’s a story of hope. It’s a story that so many people are going through right now. Just talk to them and know that your honesty and my honesty about where we are is what I think will resonate with the American people.’

“It wasn’t a political calculation, it was from the heart.”

Looking towards his future, Mr Biden said addiction “never leaves” but that many addicts had “gone on to do incredibly brilliant, great, amazing things”.

“It’s about time we started looking at addiction as a mental health issue rather than an ethical or moral issue,” he said.

Asked about the possibility of his father running for re-election at the age of 82, he said: “My dad is younger than me in his physical and mental capacity… I don’t know anyone that has more energy.”