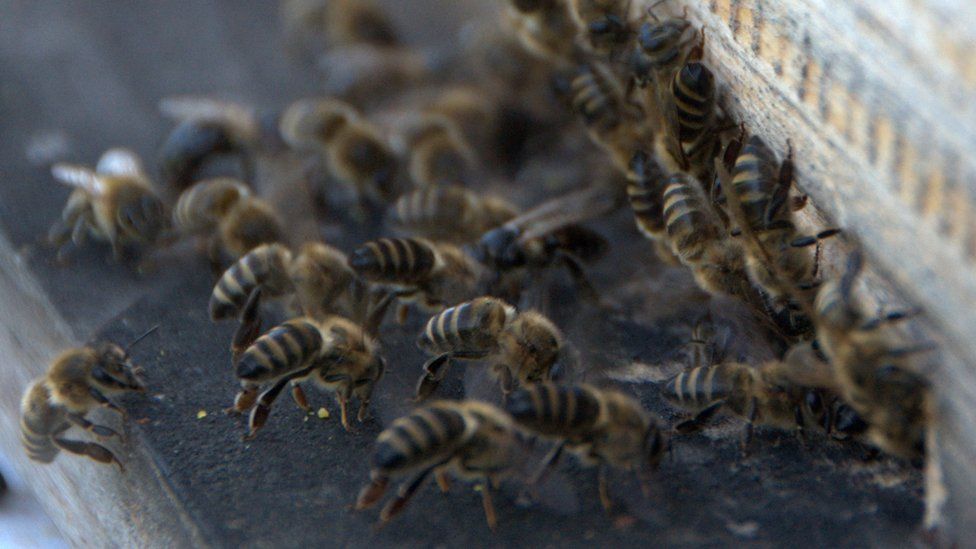 Among the virtues of bees you may not be aware of is their knack for detecting bombs.

Thanks to the fact that they can pick up the scent of explosives with their antennae, researchers in countries such as Croatia have spent years perfecting how to use bees as landmine locators.

But there’s a problem. As the insects whizz merrily about a mine-contaminated area, it’s extremely difficult for humans to keep track of where they go, not least because chasing bees across a minefield is not a great idea.

That’s where the drones come in. A team from Bosnia and Herzegovina and Croatia have come up with a way of using drones to monitor the bees while they work. The unmanned aerial vehicles fly around, capturing footage of the insects, which is later analysed by computers to reveal where landmines may be hidden in the ground.

Landmines buried during wars that happened decades ago continue to present a deadly threat in many parts of the world. Many thousands were planted during the Balkans war of the 1990s and many persist today.

There are an estimated 80,000 landmines in Bosnia and Herzegovina and a further 30,000 or so in Croatia. Clearing the devices is seen as a long-term, arduous project with no easy solutions. But technological innovations could still make a difference.

“We wanted to try to exclude humans from potential danger… and try to use drones,” says Vladimir Risojević from the University of Banja Luka in Bosnia and Herzegovina.

Previously, another team of fellow researchers had honed a method for training bees in landmine detection. They achieved this by getting the bees to associate the smell of TNT with food – a sugar solution.

In the field, the trained bees tend to cluster near to places where mines are buried, in the hope of finding food.

Such efforts have been active for many years but Prof Risojević says he and his team realised that computers could help by automatically analysing footage of the mine-seeking bees, in order to plot their activity and more easily locate the mines.

“There were moments when I thought that we are outright crazy for trying to do that but I am pleasantly surprised with the results that we obtained.”

The team began with drone-captured footage of an outdoor area, onto which they superimposed “synthetic bees” – fuzzy grey blobs zooming about the scene.

When they managed to get the synthetic bees to look indistinguishable from footage of real bees, the team turned to a machine-learning algorithm, and trained it to accurately detect and follow the blobs on screen.

In tests described in a recently published paper, the algorithm proved more than 80% accurate at tracking these digital bees.

The researchers then took to a minefield, a safe one with real but defused mines buried in undisclosed locations at the Croatia Mine Action Center, to see how the system performed under authentic conditions.

Details of the test results are yet to be published in an academic paper but Prof Risojević says there was a strong correlation between where the bees clustered and the locations of known mines at the test site.

At the moment, the system works by using drones programmed to fly along a predetermined route, criss-crossing the minefield while capturing footage of the bees as they buzz around. Analysis of the footage later reveals where the bees clustered.

It may be a few years before this approach is used in a place blighted with dangerous, active mines, says Prof Risojević. However, he thinks it could complement other demining techniques. Among the technological tools already used for demining are handheld metal detectors with built-in ground-penetrating radar.

Even with the help of technology like that, it’s hard for demining teams to know for sure that they have removed every single mine from a contaminated area. The bees and drones could check afterwards, for example, to confirm that none have been missed.

“Good technological innovation that can help to… delineate the boundaries and confirm a hazard area are really helpful,” says Matthew Breay Bolton at Pace University in New York, author of Political Minefields: The Struggle against Automated Killing.

However, he adds that there are no quick fixes to the minefield problem. Often, political wrangling and lack of resources mean clearance projects can stall, no matter what technologies are available to help. Plus, in countries such as Yemen, mines continue to be planted to this day.

Prof Risojević is hopeful that, despite the hurdles, his team’s system will one day help to decontaminate minefields in countries such as Croatia or Bosnia and Herzegovina.

And there may be other applications too.

In recent years, computer vision researchers have developed experimental systems able to track and follow insects in the wild. Prof Risojević and his team suggest that such tools could one day monitor pollinators. These insects, including bees, are crucial to the health of crops and ecosystems but their numbers have been declining lately, largely due to pollution caused by human activities.

Insects and machines working together – a fun idea, and potentially good for the planet.