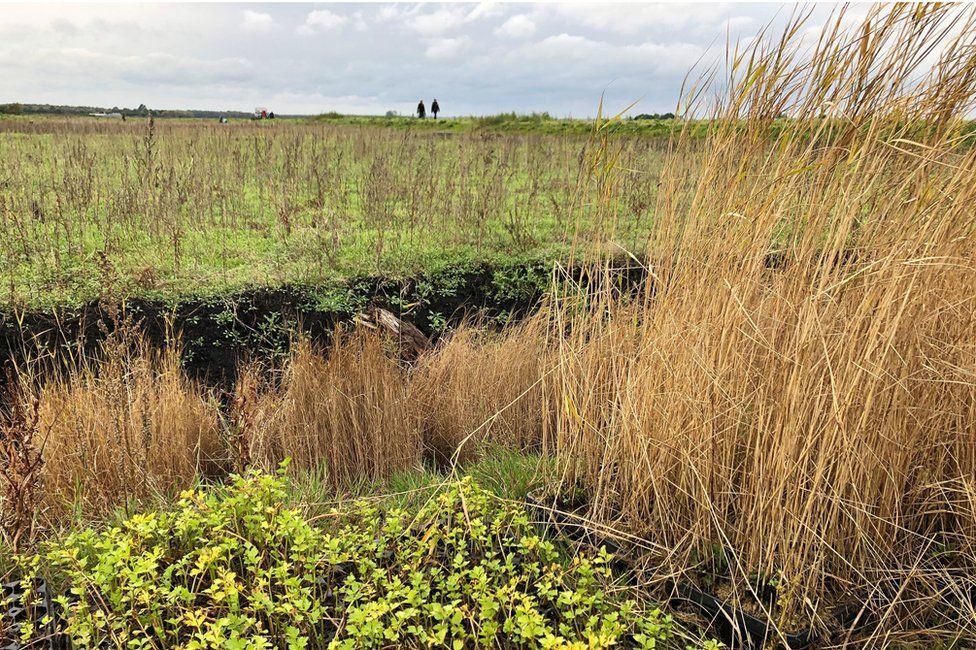 Leading garden retailers are still failing to stop the sale of peat in compost despite pressure from the government and campaigners.

The Wildlife Trusts said only one of 20 retailers contacted said it would eliminate peat from its shelves this year.

The restoration of peatlands is a key part of the government’s strategy to mitigate the impact of climate change.

However, one peat producer told the BBC that since lockdown there had been a surge in interest in gardening. Demand for peat was “unprecedented” and there was currently no viable alternative.

About 10 years ago, the UK government drew up a voluntary agreement for retailers to phase out sales of peat.

According to the Wildlife Trusts’ survey, many retailers offer peat-free composts, but only two have set a date for ending peat sales. Travis Perkins plans to go 100% peat-free this year. Wickes intends to phase out peat by 2025.

B&Q, Hillier and the Blue Diamond group of garden centres said they were committed to phasing out peat, but gave no date. Asda, Lidl and others have set themselves targets to reduce sales, but not yet to end them.

When peatland is drained and dug up, it emits rather than soak up carbon.

Craig Bennett, chief executive of The Wildlife Trusts, said: “Our survey shows that most retailers’ approach to the voluntary ban on peat sales has been woeful – even though the industry has been aware of the problem for decades.

“The time for voluntary agreements is over – the sale of peat must end now. Countless promises have been broken and targets missed, with the result that precious peatland habitats are still being unnecessarily destroyed in the name of gardening.

“Only one leading retailer – Travis Perkins – is planning to eliminate peat from its shelves by 2021, whilst growers like Hillier demonstrate that you can produce compost and grow high-quality plants without peat. These retailers are to be congratulated, but we now need government to make the rest follow their lead. The time for delay and excuses is over.”

Suppliers say they are doing what they can to meet rising demand. Ben Malin is director of Godwin’s Peat, a company based on the Somerset levels.

It provides around 120,000 cubic metres of growing material a year to garden centres, DIY outlets and professional growers across the south of England and the Midlands. Mr Malin said some 40% of this is peat.

Mr Malin said: “We’ve seen an absolute step-change in gardening over the last 12 months. We’ve had an unprecedented demand for raw material, and peat is a very important part of the supply chain.

“We’ve been moving towards peat reduction and aiming to be peat-free at a pace that the industry could move at; but this sudden increase in demand has made it absolutely clear to most people in the industry that at the moment it’s simply not possible to phase out the use of peat and meet the demand in the marketplace.”

He said that a significant amount of wood chip, which is one alternative, goes towards the biomass industry, which is subsidised. This pushes up prices.

Another option is coir, which is made from coconut husks. However it has a very long and unreliable supply chain.

He commented: “Manufacturers now produce more peat-free and peat-reduced growing media than ever, which are stocked and sold by retailers, but an immediate ban on peat use is unrealistic – access to the amount and quality of alternative materials needed is not yet in place.”

He said the HTA had come together with other industry groups to propose a way forward with work to be published soon, including “meaningful and realistic peat removal targets” and said the organisation wanted to work with government, organisations and the supply chain to deliver viable, responsibly sourced alternatives”.

Dr Rebekka Artz is an expert in peatland ecosystems at the James Hutton Institute.

She said that between two and three million cubic metres of peat – around 8,000 hectares – was used for horticulture in the UK each year. A sizeable part of this goes to amateur gardeners.

She said the volume could be likened to the size of the London O2 building. Even more was imported from the Baltic states or from the Republic of Ireland, thereby “offshoring our emissions.”

She believes it is crucial a way is found to protect the peatlands these amounts are sourced from.

“Only 3% of our land area on the planet is covered in peatlands but they are the largest carbon store that we have. They have grown very slowly since the last Ice Age, and only accumulate about a millimetre every decade. It’s a very slow-growing resource and it’s very easy to lose it.”

According to the HTA, the figure is around 2m cubic metres in total which amounts to 0.04% of peatlands that is extracted for horticulture in the UK.

The Royal Horticultural Society (RHS) recently committed to going completely “peat-free” by 2025 and is calling on gardeners across the UK to do the same.

Bord Na Mona, Ireland’s partial state company which was set up to develop peatlands for the Irish economy, also announced that it’s formally ending all peat harvesting on its land.