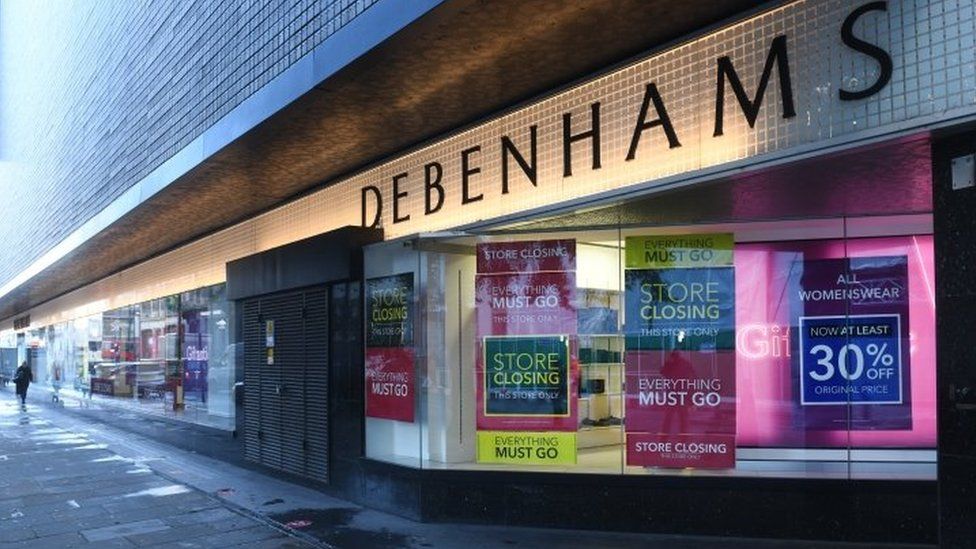 Covid-19 has taken its toll on nearly every sector, but the UK’s High Street has been particularly badly hit.

There was a net loss of nearly 10,000 shops in the UK last year and accountants PwC have warned the full effects of the pandemic are yet to be felt.

As non-essential shops prepare to reopen next week, BBC Radio 5 live has been hearing from some of the workers affected by those closures.

‘I feel ghosted by recruitment agencies’

Heather Rowlinson, aged 54, from Newcastle worked for Topshop for 34 years and was a manager for 30 of those years.

She says seeing the store close was “heartbreaking”.

She is still unemployed and “really missing my team, missing the structure of getting up every day and going to work and finding it very difficult to even just get responses from applications I’ve made”.

She says she feels “ghosted” by recruitment agencies and companies who tell her they have a job for her and then never call back.

“You give them a ring back, they never answer your calls,­ so making it a lot more stressful and emotional than it needs to be,” she says.

“It’s extremely difficult. I bought my own house a year and half ago. I need to find a job and quickly.”

“To give people a choice, so there’s a real point of difference,” she says. “I don’t think opening until 10pm will help. People who want to shop at nine or 10 o’clock at night will do it online.”

‘Competition for jobs is intense’

She is looking for work, but is worried she won’t be able to find anything flexible enough to work around her young family.

“I was very fortunate with my team and my managers because they were understanding,” she says.

Jenna says the competition for jobs is “intense”, adding: “Each time I apply for jobs at the minute, I get a little notice saying 20 to 25 people have applied already.

“You don’t quite realise there’s so many people in the same situation.”

She says she is grateful to companies such as Aldi, which have offered to interview ex-Arcadia workers for any of their upcoming positions.

“To have some support from a company which doesn’t have to support you is actually quite nice,” she says.

‘You needed to be part-therapist to be a personal shopper’

Emily Stott, aged 49, from Wandsworth, was a personal shopper for Debenhams Oxford Street for two-and-a-half years.

Before the company closed, she could see it was on “shaky ground”, so had found a part-time, back-up job as an online personal stylist with style service Stitch Fix.

She now works for them full-time – a job she loves – but still feels “massive sadness” for her former Debenhams customers who “would just come and have a nice interaction with another person who’s interested in them”.

“I had no idea you needed to be part-therapist to be a personal shopper,” she says.

“You’d have mothers of the bride who think they’ll never find anything that makes them look good and, when you do – this sounds massively dramatic – but you actually turn people’s lives around at that moment.

“So many people hate shopping or don’t know how to shop for their body. Sometimes I heard people say, ‘I’m prepared to pay £600 for this,’ because they’re so desperate.”

She also misses meeting the diverse range of customers who shopped at Debenhams.

“From middle-aged women going back to work, to people who are transitioning, to teenage boys looking for their first office suit, Debenhams attracted anyone and everyone,” she says. “And it had sizes going up to 26.”

The mother-of-one says she doesn’t know how to save the High Street, but doesn’t think late night opening is the answer.

“It’s not great for women who need flexible jobs,” she says.

‘It was hard to leave’

Amy Dwyer, aged 21, worked at Debenhams in Manchester’s Trafford Centre while studying politics at the University of Manchester.

When she lost her job in May, she had to give up her student accommodation a month early and move back in with her family in Preston.

“It was hard to leave,” she says. “Me and my housemates had decided we were going to stay on to the end and make the most of our final days together. It was really sad not to have that last month together.”

She says finding a new job has been “tough”.

“Even when I was at Debenhams, I’d looked for a different job because there was an hour commute each way. But there was just nothing. You’d go to lots of interviews because there’d be 30 to 40 people applying for one job. It has been hard.”

It took four or five months to find another job. She now works for the university’s careers service, giving CV advice to other students.

Amy thinks affordable city centre housing is the key to breathing life back into High Streets.

“The High Streets aren’t going to recover until we get more people living in them,” she says. “You see big developments being built and only 50% are affordable housing.”