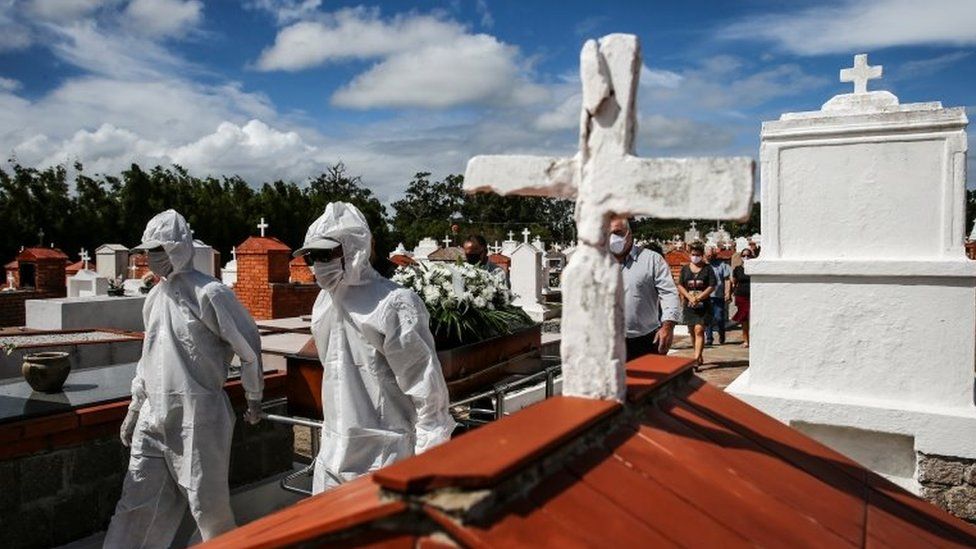 Coronavirus figures released by health authorities across South America on Monday show a number of countries grappling with a spike in infections and deaths.

Uruguay and Paraguay registered record numbers of daily deaths, while the total number of Covid cases surpassed the 13-million mark in Brazil.

The surge has been attributed to the spread of the Brazil variant.

The variant is thought to be more than twice as transmissible as the original.

Brazilian public health institute Fiocruz says it has detected 92 variants of coronavirus in the country. Experts say that the development of new variants is not surprising: all viruses mutate as they make copies of themselves to spread.

The P.1, or Brazil, variant has become a cause for concern is because it is thought to be much more contagious than the original strain.

P.1 was first detected in travellers to Japan from the city of Manaus, in the Brazilian Amazon, and sequenced in early January.

It has mutations on the spike protein, that part of the virus which attaches to human cells, and it is these mutations which are thought to make it more transmissible.

The variant is thought to have emerged in Amazonas state in November 2020, spreading quickly in the state capital Manaus, where it accounted for 73% of cases by January 2021, according to figures analysed by researchers in Brazil.

Preliminary data suggested it could be up to twice as infectious as the original strain, while more recent research puts that figure even higher, at 2.5 times as transmissible.

How widespread is it?

As genetic sequencing is not widespread throughout the region, it is hard to determine how widely the variant has spread. However, the risk has always been deemed high, as Brazil shares borders with 10 countries.

On 25 March, Peru‘s health minister said that 40% of cases in the capital, Lima, were caused by the Brazil variant, and on Monday he said that cases had been detected “almost everywhere in Peru”.

Cases of the variant have also been confirmed in Uruguay and Paraguay, both of which registered record numbers of daily deaths on Tuesday.

In Paraguay, health officials said that half of the cases on the border with Brazil were caused by the variant.

Bolivia has also registered cases of the variant and last week ordered the closure of its border with Brazil for at least a week, with a lockdown ordered for the border regions where the cases occurred.

Venezuela‘s President Nicolás Maduro has also blamed a recent spike in cases and deaths on the spread of the Brazil variant.

In Argentina, health officials have also confirmed the presence of the variant. However, doctors said on Monday that genome sequencing suggested that President Alberto Fernández, who tested positive for Covid on Saturday, did not contract one of the new variants.

And while vaccination is going ahead speedily in Chile and Uruguay, it has been slow in many other countries of the region.

The director of the Pan-American Health Organization, Carissa Etienne, has warned that the situation constitutes “an active public health emergency”.