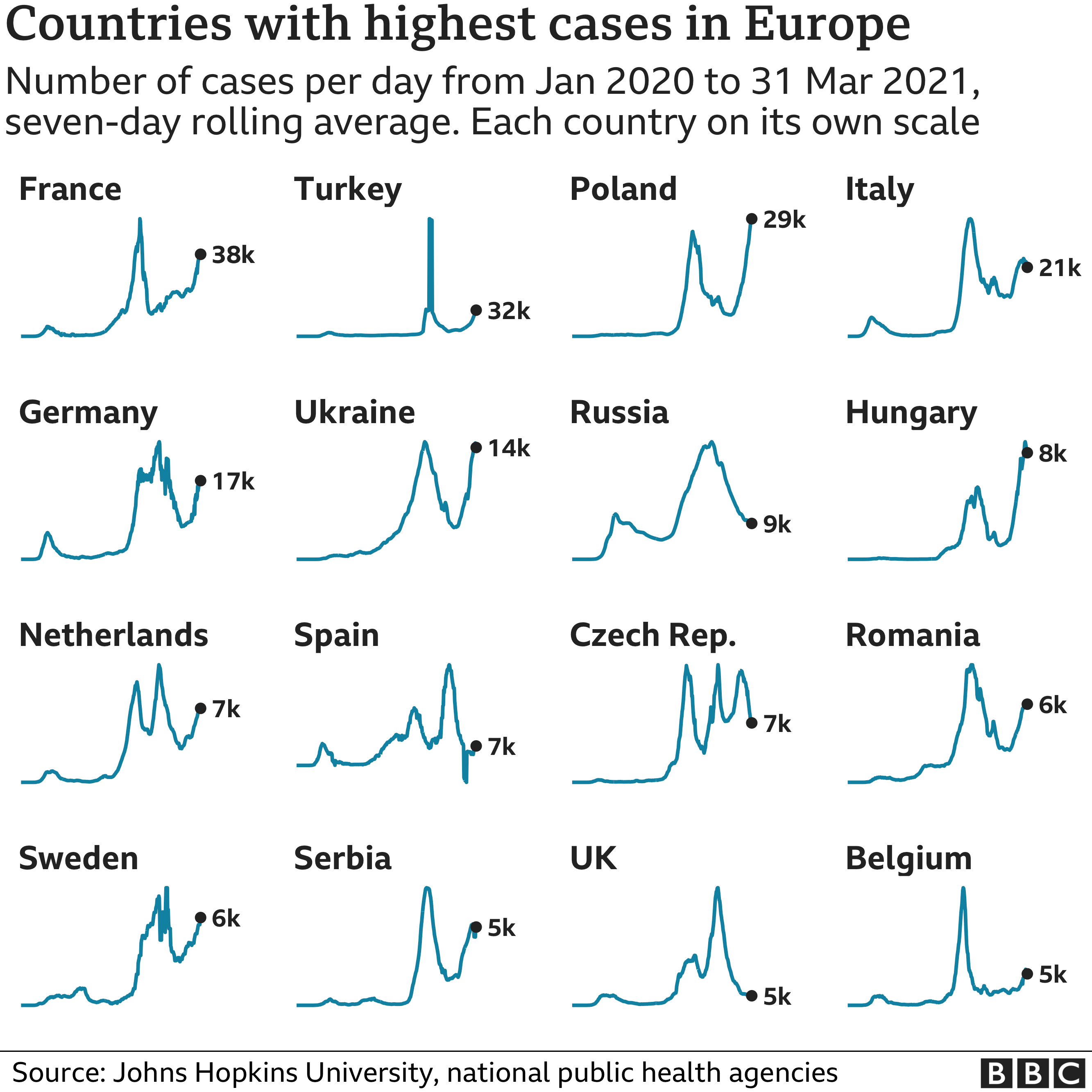 Eastern and Central Europe largely escaped the worst of the coronavirus pandemic in 2020, but the picture has changed dramatically with several countries experiencing record infections and deaths.

There is now a scramble to vaccinate the population fast but, as BBC correspondents across the region explain, the rate of infection is proving a major obstacle.

Health system tested to its limit

Poland is struggling to cope with its highest number of new infections since the pandemic began – 60 times higher than at the start of the pandemic in spring last year – because of the rampant UK (Kent) variant of the virus.

In the worst affected area of Silesia, patients are being airlifted to less burdened hospitals in neighbouring provinces. The government is now trying to attract doctors from abroad.

Poland avoided high numbers of infections and deaths when the pandemic began thanks to a strict lockdown, closing its borders and restricting people’s movement, even for exercise. That wasn’t sustainable and both movement and economic life resumed.

Schools, shops and businesses are closed again but churches in this deeply Catholic country remain open for limited numbers of worshippers for Easter. Poles have been allowed to maintain their tradition of taking their wicker baskets of eggs and sausages to be blessed by the priests.

Many here have been critical of the vaccine rollout, and the government was forced into a humiliating apology on 1 April when it suddenly changed its policy overnight and allowed anyone aged 40 to 60 to register for a jab. Demand was so high that the system crashed.

Hungary now has one of the highest Covid mortality rates in the world, with more than 21,000 coronavirus-related deaths and a third wave claiming hundreds of lives every day.

And yet its speed of vaccination is among the highest in Europe. More than one in five Hungarians has had a first dose.

Hungary has high rates of cancer and heart disease and a high fatality rate among people needing ventilation. Although the government bought an astonishing 16,000 ventilators last summer, there aren’t enough people to operate them because of a 25% shortage of doctors and a 30% shortage of nurses, largely because of emigration. Another 5,500 doctors quit last month in a row over wage reform.

Many Hungarians were sceptical of the Chinese jab but had it when offered. And when spare vaccine doses arise, friends and relatives of nurses snap them up.

Locked down and with vaccines in short supply

Some 400 people are currently dying every day in Ukraine’s second Covid wave and it’s proving more deadly than the first.

It’s far from clear that current lockdown measures are going to flatten the curve and relieve the mounting pressure on hospitals.

The rules vary across Ukraine but in most of the west and in the capital Kyiv only shops selling “essentials” are open, schools are closed, and from this week access to public transport will be limited.

Meanwhile, vaccine rollout remains stuck in first gear. Procurement has been slow and when doses have been available, the delivery of the jabs has been even slower. Latest figures show that more than a month after the first vaccines arrived (Oxford-AstraZeneca from India) fewer than 250,000 people have received a single dose and just two have had both.

With a population of more than 40 million that’s one of the lowest vaccination rates in Europe.

The obstacles are not purely logistical. Vaccine scepticism remains high with surveys suggesting that about 50% of Ukrainians would refuse to be vaccinated, even if it was available.

The pandemic claimed the scalp of the prime minister last week, just as Slovaks were beginning to feel the worst ravages of Covid were behind them.

He has a weakness for rhetorical flourishes and this week was no exception.

“On the eve of Easter, which we celebrate as a symbol of suffering, sacrifice and forgiveness, I’ve decided to make this gesture of forgiveness towards those politicians who were demanding I step down as prime minister,” he told reporters.

Please forgive me for all the mistakes I have made during this past year. Don’t worry, everything will be fine

The government is now being resurrected. Finance Minister Eduard Heger takes over at the top while Mr Matovic moves into his job instead. Many of the ministers who stepped down over the secret Sputnik deal with Moscow are now coming back.

For weeks Slovakia saw some of the most sobering Covid statistics in Europe. Now this little country of 5.5 million has given a higher proportion of its population (15%) a first dose of vaccine than the EU average.

So has his sacrifice ended the crisis? Not necessarily, say his critics.

“Matovic is a bit like the virus itself; it mutates and returns, maybe in an even more dangerous form,” said Matus Kostolny, editor-in-chief of Dennik N newspaper.

However, he and others agree that Eduard Heger, a less confrontational figure, will be more likely to listen to the experts. “That might help,” Mr Kostolny told the BBC.

‘Nobody thinks about the families’

Czech authorities have pleaded with people to respect Covid restrictions over Easter. The plan is for children to go back to school in a week’s time, but they say that could be jeopardised if people mingle now in big numbers.

Lea Surovcova has spent a year reporting on the pandemic for Czech Television. In November, the story came to her.

The last time she called her 86-year-old grandfather, Franta, he seemed in good spirits and good health. Two days later he was dead.

“Everybody talks about the number of deaths and infections, but nobody thinks about the families,” she told me.

Those numbers are now falling, slowly. The country is no longer at the very apex of the European charts. But it’s not far behind.

Lea has scrawled her grandfather’s name by one of the 25,000 white crosses that have appeared on Prague’s Old Town Square. Devoid of tourists, the square is now an impromptu memorial to the dead.

But even the crosses, spray-painted on the cobblestones, are a political act, the work of an NGO critical of Prime Minister Andrej Babis and his handling of the pandemic. Mr Babis admits there have been mistakes, but points to a more optimistic few months ahead as the vaccination effort is stepped up – and if people stay home.