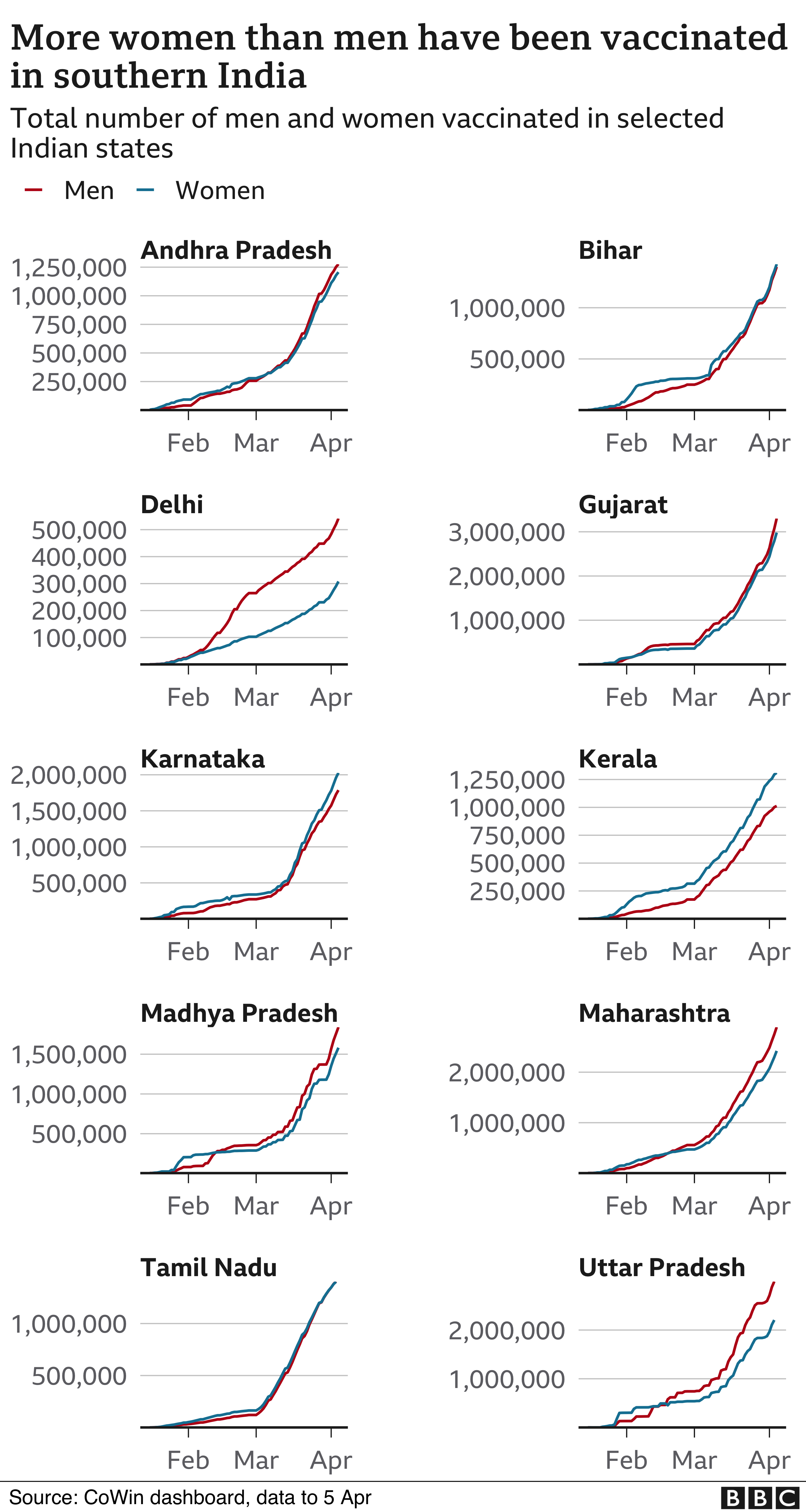 India has stepped up its coronavirus vaccination drive amid a deadly second wave of infections.

The country on Sunday breached the 100,000 daily caseload mark for the first time since the pandemic began.

Everyone above the age of 45 is now eligible for the jab. Some states are also targeting specific groups like bank workers and lawyers.

Nearly 80 million doses have been given so far, mostly to frontline workers and people above the age of 60.

The northern states of Uttar Pradesh has announced that it will run special vaccination drives for journalists, bank employees and lawyers. Neighbouring Uttarakhand state is also planning similar targeted drive.

The world’s biggest inoculation drive aims to cover 250 million people by July, but experts say the pace needs to pick up further to meet the target.

The third phase – which began on 1 April – opened amid a sharp uptick in Covid-19 cases. On Sunday, India became the second country after the US to report 100,000 new cases in a single day. More than half of those were confirmed in Maharashtra, which has India’s largest city Mumbai as its capital.

India’s caseload had dropped sharply by the time it began vaccinating people early this year. It was adding under 15,000 infections daily. But cases began to spike again in March, largely driven by poor test-and-trace and lax safety protocols.

Experts say India’s second wave is being fuelled by people being less cautious – and mixed messaging by the government.

Since the pandemic began, India has confirmed more than 12 million cases and over 165,000 deaths. It’s the third-highest number of Covid-19 infections in the world after the United States and Brazil.

India launched its vaccination drive on 16 January, but it was limited to healthcare workers and frontline staff – a sanitation worker became the first Indian to receive the vaccine.

From 1 March, the eligibility criteria was expanded to include people over 60 and those who are between 45 and 59 but have other illnesses.

The third phase of its vaccination drive with everyone above the age of 45 eligible for the jab was launched on 1 April.

The country’s drugs regulator has given the green light to two vaccines – one developed by AstraZeneca with Oxford University (Covishield) and one by Indian firm Bharat Biotech (Covaxin). Several others candidates are at different stages of trials.

India also wants to scale up the drive quickly to stem the recent spike in cases. So it recently placed a temporary hold on all exports of the Oxford-AstraZeneca coronavirus vaccine, which is being made by India’s largest vaccine manufacturer, the Serum Institute of India (SII).

Experts believe India should ramp up vaccination in areas of high transmission and in states where elections are being held to prevent the virus from spreading.

Bhramar Mukherjee, a professor of biostatistics and epidemiology at the University of Michigan, told the BBC that India needed to administered 10 million shots daily “instead of being complacent with 3 million” doses a day.

“It is much easier to roll out vaccination when the infection is not so high. Now the healthcare capacity is stretched between vaccination and Covid care.”

How many have been vaccinated so far?

Nearly 80 million doses of coronavirus vaccines have been administered so far.

For decades now, India has been running one of the world’s largest immunisation programmes that vaccinates tens of millions, including newborns and pregnant women, against various diseases.

Many of the poor have little information on how to register themselves and access the vaccine free of cost. Online registration could be an impediment for those who don’t own phones or use the internet.

“There’s very little public health communication for the poor and the working class regarding the vaccines,” says Radha Khan, an independent consultant working in the field of gender, governance and social inclusion.

The government aims to use up to 500 million doses to cover 250 million “priority people” by the end of July.

Interestingly, in some states, more women than men have been vaccinated. The reasons are not clear.

Vaccination is voluntary. State-run clinics and hospitals are offering free jabs but people can also pay 250 rupees ($3.4; £2.4) a dose at private facilities to get vaccinated.

The government is spending around $5bn for free doses at state-run clinics, public health centres and hospitals.

It has also bought millions of doses of two approved vaccines and provided funds to states for their vaccination programmes.

Vaccines come with side effects for some people.

India has a 34-year-old surveillance programme for monitoring such “adverse events” following immunisation. Experts say a failure to transparently report adverse effects could easily lead to fear-mongering around vaccines.

Until early February, India reported 8,483 “adverse events” after vaccination. Most of these events were “minor” – anxiety, vertigo, giddiness, dizziness, fever, and pain, and all patients had recovered, the government said.

The surveillance programme has examined 412 cases of “severe adverse events”, including 79 deaths after vaccination until 13 March, according to a senior official.