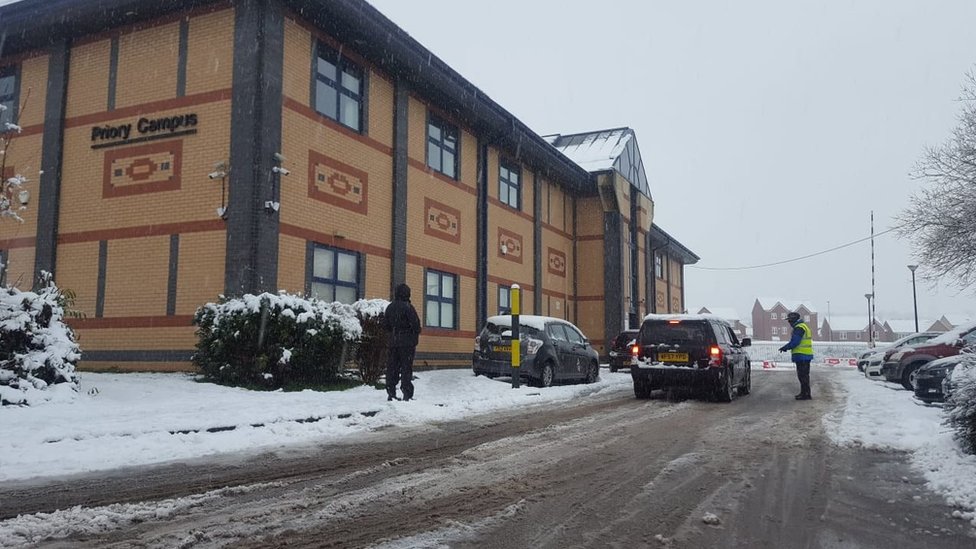 Publishedduration2 hours agomedia captionSeveral Leeds bus drivers were faced with challenging conditions in the snow.High demand and heavy snow have had a “severe impact” on Yorkshire’s ambulances, with bad weather also affecting coronavirus vaccinations.The county ambulance trust declared a major incident, urging calls only in a “serious or life-threatening emergency” due to poor road conditions.A…

High demand and heavy snow have had a “severe impact” on Yorkshire’s ambulances, with bad weather also affecting coronavirus vaccinations.

The county ambulance trust declared a major incident, urging calls only in a “serious or life-threatening emergency” due to poor road conditions.

A vaccination centre in Barnsley was closed, with patients told to await new appointments.

A yellow Met Office warning for snow and ice is in force until 21:00 GMT.

Staff were “working extremely hard to reach patients”, he said, but “hazardous driving conditions and blocked roads mean that it is taking us longer than normal in the worst-hit areas.”

In Barnsley, the town’s Clinical Commissioning Group issued a tweet advising that it had postponed all Covid vaccinations at one centre from 15:00 on Thursday.

It asked those due to receive jabs at the Priory Campus in Lundwood after this time not to travel, and said patients would be contacted with a rescheduled appointment.

The group said its two remaining centres at Goldthorpe and Apollo Court, in Dodworth, remained open, but those unable to attend would also get a new time and date.

West Yorkshire Police said it had also seen a surge in calls and urged people not to call 101 for “non-urgent matters”.

Supt Chris Bowen said the force had received 300 calls to the 999 and 101 numbers in the space of an hour on Thursday morning.

A large snowball fight on Woodhouse Moor in Leeds was criticised for an apparent lack of social distancing after footage was posted on social media.

Liam Ford, who recorded the video, said he saw the “awful scenes” after he “heard the commotion while on a walk round the block”.

Motorists reported hazardous driving conditions on many routes and police warned people to stay at home or allow extra time for essential journeys.

Phil Airey said his usual 30-minute commute from Boston Spa to Harrogate took 90 minutes due to the poor conditions.

“The gritters have been doing their job but any sort of hill then it’s not very good and if you go off onto the little roads well they are not good at all,” he said.

West Yorkshire’s road policing unit said it was dealing with a number of crashes while the North Yorkshire force said the A59 was blocked near Skipton due to a number of vehicles getting stuck in the snow.

The Met Office has not issued a weather notice for Friday, but a yellow warning for snow and ice on Saturday is in place across most of northern England and Scotland.