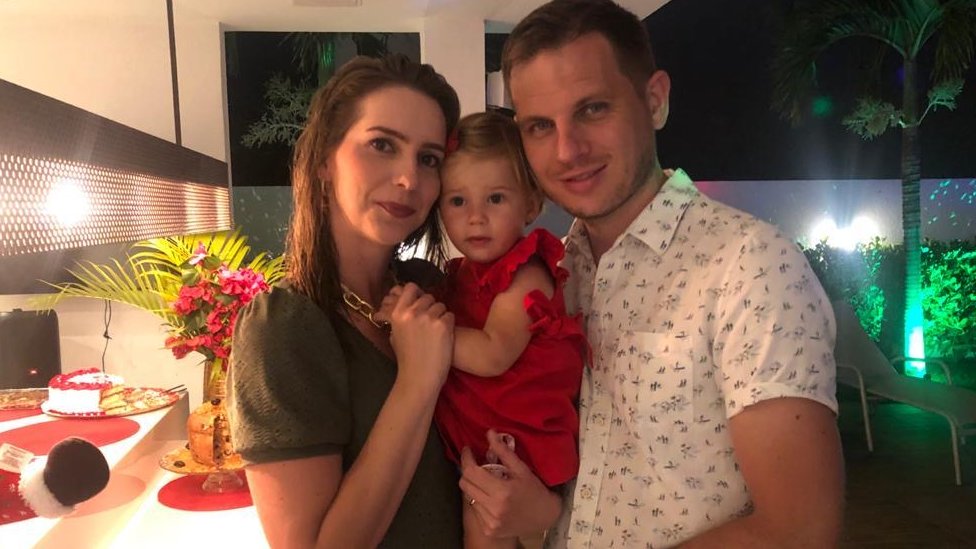 Publishedduration2 hours agomedia captionGrant Shapps explained the ban to BBC political correspondent Chris MasonA ban on travellers to the UK from South America, Portugal and Cape Verde will begin on Friday due to a new Covid variant identified in Brazil.Transport Secretary Grant Shapps said the change would come into force from 04:00 GMT.British and Irish…

A ban on travellers to the UK from South America, Portugal and Cape Verde will begin on Friday due to a new Covid variant identified in Brazil.

Transport Secretary Grant Shapps said the change would come into force from 04:00 GMT.

British and Irish citizens and foreign nationals with residence rights will still be able to travel but must isolate for 10 days, he said.

The decision was announced after a meeting of ministers on Thursday.

Meanwhile, the UK has reported a further 48,682 daily cases – the fourth day in a row that the figure has been below 50,000. The government website said updating the death figures had been delayed due to an issue with processing the data.

The new travel ban applies to people who have travelled from, or through, the South American countries of Argentina, Brazil, Bolivia, Chile, Colombia, Ecuador, French Guiana, Guyana, Paraguay, Peru, Suriname, Uruguay and Venezuela in the last 10 days.

Portugal, including the islands of Madeira and the Azores, is also banned, along with the central American nation of Panama and the former Portuguese colony of Cape Verde, off the West African coast.

Mr Shapps said Portugal had been included “given its strong travel links with Brazil” – but there would be an exemption for hauliers travelling from the country to allow the transportation of essential goods.

He said suspending travel from that European country would act “as another way to reduce the risk of importing infections”.

On Wednesday, Prime Minister Boris Johnson said he was “very concerned” about the Brazilian variant of the virus.

New variants of Covid-19 have previously been identified in the UK and South Africa, with many countries imposing restrictions on arrivals from both nations.

Several Central and South American nations had already restricted travel from the UK, including Brazil, Chile, El Salvador, Guatemala and Panama, while others such as Argentina and Uruguay have closed their borders to non-resident foreign nationals.

The Department for Transport said under the ban no exemptions would apply, including those for employment, and people who live with someone who has travelled from one of the banned countries will have to self-isolate for 10 days.

Qatar and the Caribbean islands of Aruba, Bonaire, Sint Eustatius and Saba have also been removed from the UK’s travel corridor lists, meaning anyone arriving from these countries after 04:00 GMT on Saturday will have to quarantine for 10 days.

‘Being stranded is not a nice feeling’

Jon Dent, 31, from Wolverhampton, travelled to Brazil with his wife Carla, 32, in October so that her family – who live in Goiania – could see their daughter Luiza, one, for the first time.

They are due to fly back to the UK on 6 February but Jon now fears they may be stuck out there for months due to the travel ban.

“We had planned to visit in February 2020 but we had to postpone because of the lockdown and that was rough on my wife, she suffered a lot.

“Now I think my mum is suffering as she’s expecting Luiza to be back, but who knows now?

“My initial reaction was worry because it’s so unknown. The thought of not being able to return home and being stranded is not a nice feeling.

“I’m hoping British residents will be able to get home but I don’t know if the government will organise flights. I think it’s a long shot. I hope we can get home and not be stranded out here for months.

“We’ve got to be patient but at the same time flexible.”

BBC News online health editor Michelle Roberts said there was no sign that any of the new variants were more dangerous, with scientists confident that vaccines would work against them.

Felipe Naveca, deputy director of research at the Brazilian state-run Oswaldo Cruz Foundation, said the new variant was “of concern” and its origin was “undoubtedly” from the Amazon region.

He told the BBC’s South America correspondent Katy Watson the new variant had evolved separately from those in the UK and South Africa, but that it showed some of the same mutations.

“Some of these mutations have been linked to increased transmission and that is of concern,” he said, adding: “We have to stop the virus from circulating, because we’re giving it the opportunity to evolve.”

The Covid pandemic may have arrived in South America later than in Europe but it did so with a vengeance. In May, the World Health Organization warned that it had become the new epicentre of the pandemic with Brazil soon joining the top three countries with the most confirmed cases.

But the travel ban is not about numbers; some of the countries on the list have had relatively few Covid cases, like Guyana with fewer than 7,000.

This is about the new strain and how it could spread quickly through travel in the region. Brazil borders 10 countries and cross-border business is brisk.

Panama, also on the list even though it is further to the north, is a major travel hub for flights from South America to Europe and the US.

And tourism has not stopped either. On 25 December, Brazil suspended all flights from the UK over the new UK strain, but air travel from other countries continued, especially over Christmas – the main holiday season in the southern hemisphere.

The travel ban comes after it was announced a requirement for arrivals into England to test negative for coronavirus 72 hours before their journey will now come into force at 04:00 GMT on Monday. The Scottish government said the delay meant it would also wait until Monday.

Wales and Northern Ireland are expected to announce their own plans in the coming days.

Mr Shapps said the new rules had been delayed from Friday “to give international arrivals time to prepare” but Labour leader Sir Keir Starmer said people would be “bewildered” by the delay and would “feel that we’re exposed”.

Shadow home secretary Nick-Thomas-Symonds said the ban on arrivals from Brazil and neighbouring countries was “a necessary step” but he added: “The failure to put in place an effective policy on testing before entry and a quarantine system that is checking only one in 100 people is putting lives at risk.”

Meanwhile, Covid-19 case rates have fallen in most regions of England, according to the latest data from Public Health England’s weekly surveillance report.

However, the rate increased in the North West, South West and the West Midlands.

Are you due to travel back to the UK from any of the affected countries? Share your experiences. Email haveyoursay@bbc.co.uk.