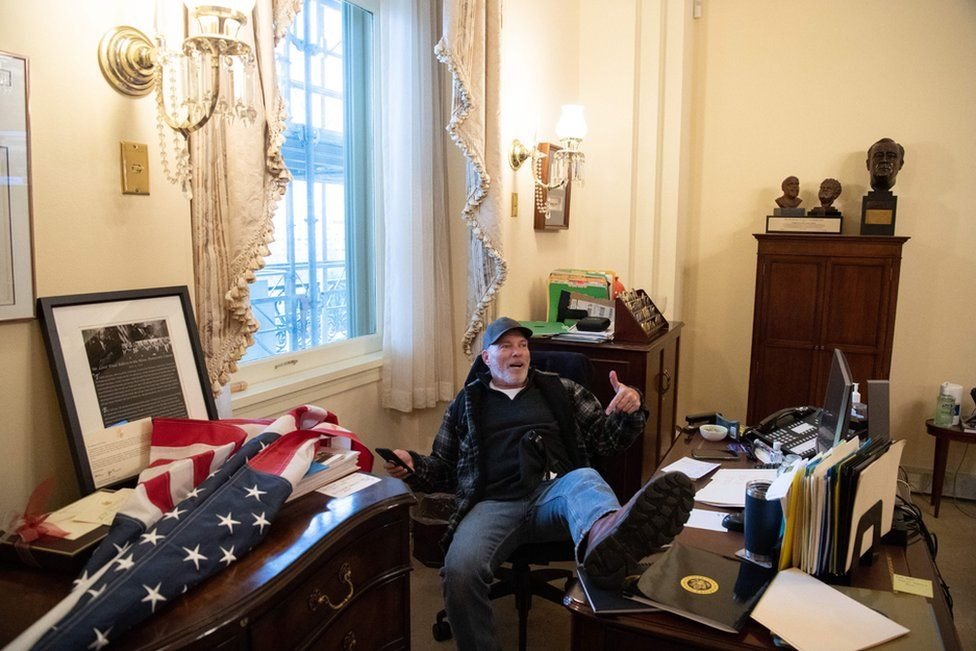 By Tara McKelveyBBC White House reporterPublishedduration2 hours agoimage copyrightGetty ImagesThe suspects in the Capitol riot are a varied group: they include a West Virginia lawmaker, a Florida firefighter and a QAnon shaman from Arizona.It’s been over a week since the Capitol Hill riot – how much progress has law enforcement made bringing the perpetrators to…

The suspects in the Capitol riot are a varied group: they include a West Virginia lawmaker, a Florida firefighter and a QAnon shaman from Arizona.

It’s been over a week since the Capitol Hill riot – how much progress has law enforcement made bringing the perpetrators to justice?

How many arrests so far?

More than 170 case files have been opened and 70 people charged so far, said Michael Sherwin, US Attorney for the District of Columbia.

Some of the misdemeanour charges filed so far are “just the beginning”, he said, with officials looking at “significant felony cases” tied to sedition and conspiracy.

After a week of FBI appeals for help identifying the man seen carrying a Confederate flag in the Capitol during the riots, a man was arrested on Thursday in Delaware, according to US media reports.

In the pictures, which ricocheted around the world, he is dressed in jeans and a black sweatshirt, and appears to have a tattoo under one of his eyes. He has been named as Kevin Seefried and is due in court on Thursday afternoon.

On Sunday, the Department of Justice announced the arrests of two men who were allegedly pictured bringing plastic restraints into the Capitol.

Authorities say Eric Gavelek Munchel is the individual seen carrying a number of plastic zip ties inside the Senate chamber. He was detained in Tennessee. Larry Rendell Brock, who is accused of entering the Capitol with a white flex cuff – a restraining device used by law enforcement – was arrested in Texas.

His ex-wife turned him in. “When I saw this was happening, I was afraid he would be there,” she told investigators, describing how she felt when she heard about the riots. Then she saw the images, and she recognised her former husband: “It is such a good picture of him.”

So far, neither has been accused of plotting to use the restraints, but face disorderly conduct and violent entry charges.

The FBI is still seeking dozens more individuals and has asked the public to help identify and locate them.

What are law enforcement saying about progress?

Steven D’Antuono, the head of the FBI’s Washington field office, told reporters on Tuesday that they have been inundated with information and tips from the public: so far, they have received about 100,000 videos and photos.

Justice Department officials said they are considering filing serious charges of seditious activity against some individuals who were involved in the siege on the Capitol.

According to federal criminal code, seditious conspiracy means an effort to conspire to overthrow the US government. The punishment is severe: up to 20 years in prison.

US Attorneys in Ohio, Minnesota, Kentucky and other states have also pledged to prosecute anyone who travelled from their regions to take part in the riot.

Who are the key people charged so far?

Jacob Anthony Chansley, known as Jake Angeli or as he describes himself the “Q Shaman”, is a well-known follower of the unfounded QAnon conspiracy theory who lives in Glendale, Arizona.

Known for appearing with a painted face, fur hat and horns while carrying a “Q sent me” banner in public, Mr Chansley, 33, has been charged with violent entry and disorderly conduct after appearing in multiple images inside the halls of Congress and the Senate chamber.

His mother told a local ABC News station on Monday that Mr Chansley had not eaten since his arrest because the detention facility wouldn’t serve him all organic food.

In videos posted to his social media accounts, he shouts about child-trafficking in front of government buildings or inside shopping malls, and attends pro-Trump or QAnon-linked “save our children” rallies.

Like many of his fellow QAnon followers, Mr Chansley says he believes Covid-19 is a hoax.

President Trump – viewed as a hero by the movement – has stopped short of endorsing the conspiracy theory but has described QAnon activists as “people who love our country.”

Doug Jensen, 41, from Des Moines, Iowa, appeared in one of the most widely shared videos of the riots showing a lone African American officer holding back the mob.

Mr Jensen has been arrested and faces five federal charges, including violent entry and disorderly conduct and obstructing a law enforcement officer during a civil disorder.

In it, he can be seen chasing a police officer up a flight of stairs inside the Capitol wearing a shirt with the QAnon slogan “trust the plan”.

Mr Jensen later identified himself on his Twitter account, tweeting: “You like my shirt?” and “Me…” under images of him inside the Capitol shared by fellow QAnon supporters.

On his Twitter, Mr Jensen regularly expresses support for President Trump, engages with well-known QAnon accounts, and tweets QAnon phrases such as WWG1WGA – short for “where we go one we go all” – a rallying cry for the conspiracy’s adherents.

Nick Ochs was arrested at an airport in Honolulu, Hawaii, by the FBI, as he returned home from Washington DC.

He’s accused of unlawful entry of restricted buildings or grounds, after he posted a picture smoking a cigarette inside the Capitol building, tweeting: “Hello from the Capital lol”.

Mr Ochs describes himself as a “Proud Boy Elder from Hawaii”. The Proud Boys is an anti-immigrant and all male far-right group founded in 2016.

President Trump addressed this group specifically in the first presidential debate. In response to a question about white supremacists and militias he said: “Proud Boys, stand back and stand by.”

Richard Barnett is the man pictured with his feet on a desk in Speaker Nancy Pelosi’s office. He was also pictured outside the Capitol with a personalised envelope he took from her office.

He’s been arrested for unlawful entry, disorderly conduct on Capitol grounds, and theft of public money, property, or records.

Mr Barnett is 60 years old and from Arkansas.

Local media reports say Mr Barnett is involved in a group that supports gun rights, and that he was interviewed at a “Stop the Steal” rally following the presidential election – the movement that supports President Trump’s unsubstantiated claims of election fraud.

One of the most striking images from that day showed a man wearing a hoodie with the words: “Camp Auschwitz”. Auschwitz was a Nazi extermination camp where more than a million people, mostly Jews, were murdered during World War Two by Germany.

For many, the slogan showed some of the dark forces behind the protests.

Mr Packer was arrested in Virginia and has been charged with trespassing in a federal building and “violent entry and disorderly conduct” on Capitol grounds.

Less than a month after he was sworn in as a Republican delegate in the West Virginia state legislature, Mr Evans filmed himself pushing through the crowd as he stormed the Capitol wearing what appears to be a motorcycle helmet.

“We’re going in,” he said in the now-deleted Facebook live stream. “We did it! Derrick Evans is in the Capitol!” he yelled, adding, “patriots inside, baby!”

His participation in the riot led lawmakers in his home state to consider cutting off his access to the West Virginia statehouse.

But within a week of the riot, he had resigned. He is facing federal charges of trespassing and disorderly conduct.

Northeastern University’s Max Abrahms, a political-science professor who studies counterterrorism, explains that it can take time to track down a suspect – for a variety of reasons.

“This could be an individual who doesn’t have a lot of friends or colleagues,” Abrahms says of the man seen waving the Confederate flag, who was not identified for more than a week.