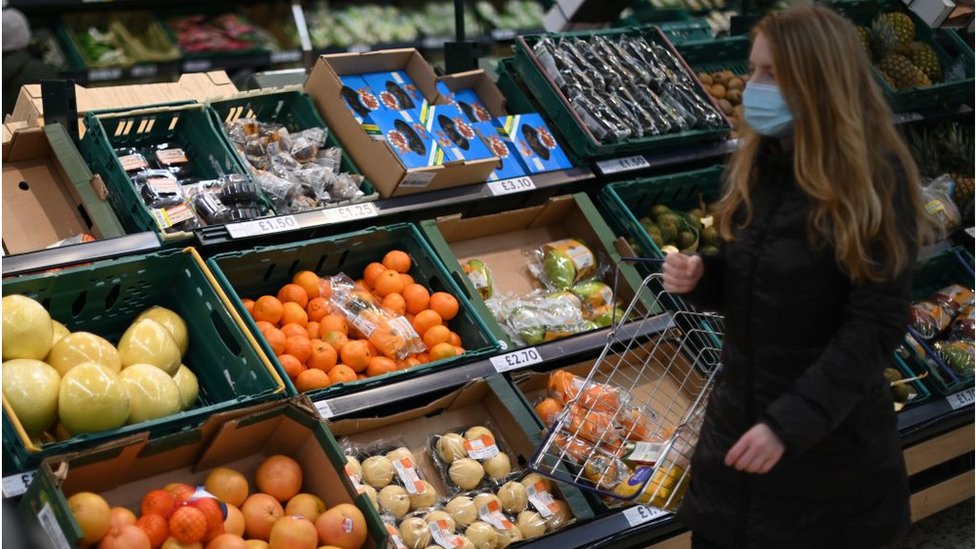 Publishedduration1 hour agoimage copyrightDANIEL LEAL-OLIVASTesco says it has seen some disruption to food supplies in Northern Ireland since trading arrangements with the EU changed on 1 January. Boss Ken Murphy said there had been “limited disruption” to imports of food such as citrus fruit and ready meals.But he said the retailer was working closely with…

Tesco says it has seen some disruption to food supplies in Northern Ireland since trading arrangements with the EU changed on 1 January.

Boss Ken Murphy said there had been “limited disruption” to imports of food such as citrus fruit and ready meals.

But he said the retailer was working closely with government on both sides of the Irish Sea to “smooth the flow”.

Since 31 December, Northern Ireland is the only part of the UK that has stayed in the EU’s single market for goods.

But there have been shortages of some products in Northern Ireland as retailers grapple with post-Brexit arrangements for importing food products from Great Britain.

In an update to the stock market, Tesco said its “comprehensive preparations and… strong relationships with suppliers” had allowed it to maintain strong levels of availability during the Brexit transition period.

‘Challenge not a crisis’

However, Mr Murphy said certain foodstuffs had faced supply chain disruption going into both Northern Ireland and the Republic of Ireland.

“Ready meals have been the most affected as they have an eight-day shelf life so any wait is more likely to have an impact,” he said.

“Some processed meat and some citrus fruit has also been impacted, but it is important to stress that our availability in the Republic and Northern Ireland is strong and is very strong in the mainland UK.

“We see this as a challenge at the moment, but not a crisis.”

He said he was confident Tesco would have the right measures in place to supply Northern Ireland after end of a three month grace period on certain rules and regulations with the EU on 31 March.

Mr Murphy also said there had also been “teething problems” with supply flows from continental Europe to Great Britain.

“Inevitably there are bedding-in issues, teething issues, that you would expect with any new process that’s been set up at relatively short notice,” he said.

“We’re working our way through those and we would hope over the coming weeks and months that we will end up with a much smoother flow of product.”

Under new trading arrangements, food products entering Northern Ireland from Britain need to be professionally certified and are subject to new checks and controls at ports.

A three month “grace period” means that supermarkets currently don’t need to comply with all the EU’s usual certification requirements until 1 April – but there has still been disruption.

M&S has temporarily reduced its range of food products and Sainsbury’s has been sourcing Spar-branded products from an NI wholesaler.

This week the bosses of Tesco, Sainsbury’s, Asda, Iceland, Co-Op and Marks & Spencer warned that trade into Northern Ireland would become “unworkable” if further new certification requirements were introduced in April .

The government said a new dedicated team has already been set up and will be working with supermarkets, the food industry and the Northern Ireland Executive to develop ways to streamline the movement of goods.

Tesco’s comments came as the supermarket giant reported record sales for the Christmas period after customers looked to “treat themselves” amid tough Covid restrictions across most of the UK.

UK like-for-like sales were up 8.1% in the six weeks to 9 January, as the supermarket saw a surge in demand for goods in its Tesco Finest range.

Big grocers have benefited at a time when most non-essential shops and restaurants are closed, prompting consumers to spend more on their weekly shop. But they have faced criticism too.

Last month, Tesco said it would repay £585m of business rates relief after it was criticised for paying dividends to shareholders during the crisis. Most big grocers followed suit.

Tesco was later criticised for keeping its shops open on Boxing Day despite union calls to give staff the day off.

In its results the grocer said it had given all frontline staff a 10% bonus over Christmas. It also said it had shielded vulnerable staff and taken on nearly 35,000 additional temporary staff for the season.