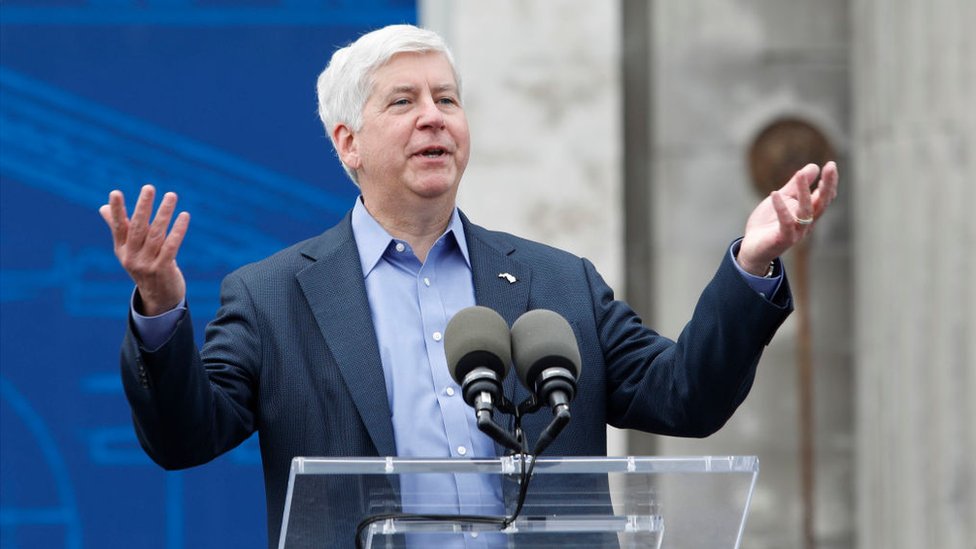 Publishedduration3 hours agomedia captionFlint resident Melissa Mays: ‘Our hair fell out’Michigan’s former governor has been charged over the deadly contamination of water in the city of Flint.Officials charged Rick Snyder with wilful neglect of duty, punishable by up to a year in jail and a fine, reports the Associated Press.His health director and other former…

Michigan’s former governor has been charged over the deadly contamination of water in the city of Flint.

Officials charged Rick Snyder with wilful neglect of duty, punishable by up to a year in jail and a fine, reports the Associated Press.

His health director and other former officials are also expected to be charged.

Twelve people died after the city switched its water supply to the Flint River in 2014 in a bid to save money.

An outbreak of Legionnaires’ disease followed, and residents were found to have drunk water poisoned with lead.

The criminal charges on Wednesday followed a new investigation into the case. Prosecutors dropped previous charges in 2019, pledging a more thorough probe.

Michigan Attorney General Dana Nessel said she will give more details at a news conference on Thursday.

A lawyer for Mr Snyder commented: “We believe there is no evidence to support any criminal charges against Governor Snyder.”

The environmental disaster attracted global attention as activists accused officials of racism. Flint is a majority-African American city, where over 40% of the residents live in poverty, and some suggested that authorities’ indifference to the community led to the crisis.

What happened in Flint?

In 2014, when Mr Snyder was governor, Flint switched its water supply away from the system of the nearby city of Detroit. Instead of drawing water from Lake Huron, it instead used the Flint River.

Flint was in a financial state of emergency and the switch was meant to save the city millions of dollars.

But the water from the river was more corrosive than Lake Huron’s and was not treated properly. This caused lead – a powerful neurotoxin – to leach from the pipes.

Residents started noticing problems with the water. One family in 2016 told the BBC that the tap water sometimes came out blue or yellow, and that all five family members began to lose their hair and developed painful rashes.

Despite this, local officials denied anything was wrong for more than a year, even as residents complained that the water tasted and looked strange.

Bacteria in the water was also blamed for an outbreak of Legionnaires’ disease – a serious type of pneumonia – that resulted in 12 deaths.

The drinking water crisis drew national attention, and became known as one of the worst man-made environmental disasters in US history.

In 2016 Governor Snyder apologised to the Flint community and said that government at all levels had failed the city. President Barack Obama said Flint had been “short-changed” and declared a state of emergency for the city, releasing federal aid.

A report commissioned from a government-appointed civil rights group said that “systemic racism” helped to cause the crisis.

The city has since switched back to using Detroit’s water system. However, many local residents still rely on bottled water for drinking, cooking and washing, saying they no longer trust the government.

Thousands of residents have filed lawsuits against the state of Michigan over the water scandal.

In August, the state announced that it had reached a preliminary settlement to pay $600m ($439m) to victims of the crisis.

Why were the previous charges dropped?

In 2019, prosecutors dropped all criminal charges against eight officials awaiting trial over the water crisis. This included Michigan’s former health director Nick Lyon, who was accused of involuntary manslaughter.

Seven officials had already taken plea bargains where the accused pleads guilty to a lesser charge in exchange for a lighter sentence or agreement that other charges will be dropped.

The prosecutors, who assumed control of the investigation earlier that year after a new attorney general was elected, said “all available evidence was not pursued” by the previous team, and promised to launch a new and more thorough probe.