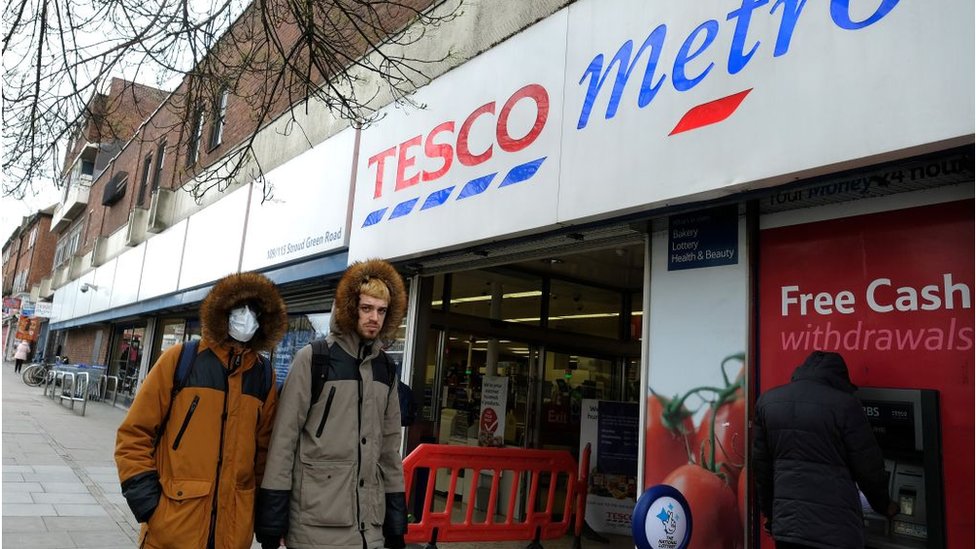 Publishedduration1 hour agoimage copyrightGetty ImagesTesco, Asda and Waitrose have become the latest supermarkets to say they will deny entry to shoppers who do not wear face masks unless they are medically exempt. It follows a similar move by Morrisons, while Sainsbury’s says it will challenge those who flout the rules. Retailers have been criticised for…

Tesco, Asda and Waitrose have become the latest supermarkets to say they will deny entry to shoppers who do not wear face masks unless they are medically exempt.

It follows a similar move by Morrisons, while Sainsbury’s says it will challenge those who flout the rules.

Retailers have been criticised for not doing enough to stop people breaking Covid rules as infections spread.

But enforcement of face coverings is officially a police responsibility.

However, supermarkets can deny entry to their premises which is private property, and can call the police if someone refuses to follow the rules or becomes abusive.

Senior police figures have reportedly said there is little officers can do to enforce the rules in shops because they are so busy.

But policing minister Kit Malthouse said that they would offer “backup if things go seriously wrong”.

“What we hope is that in the vast majority of cases the enforcement, or the reminders if you like, put in place by the store owners will be enough,” he told BBC News.

A Tesco spokeswoman said the supermarket chain had decided to strengthen its policies.

“To protect our customers and colleagues, we won’t let anyone into our stores who is not wearing a face covering, unless they are exempt in line with government guidance,” she said.

“We are also asking our customers to shop alone, unless they’re a carer or with children. To support our colleagues, we will have additional security in stores to help manage this.”

An Asda spokesman said if customers had forgotten their face coverings, it would continue to offer them one free of charge.

But he added: “Should a customer refuse to wear a covering without a valid medical reason and be in any way challenging to our colleagues about doing so, our security colleagues will refuse their entry.”

Andrew Murphy, executive director of operations at Waitrose, said: “We’ve listened carefully to the clear change in tone and emphasis of the views and information shared by the UK’s governments in recent days.

“By insisting on the wearing of face coverings, over and above the social distancing measures we already have in place, we aim to make our shops even safer for customers.”

On Tuesday, Sainsbury’s told the BBC it did not have the power to deny entry to shoppers without masks. However, trials showed customers complied more when asked to wear masks by security guards at the door, it said.

In an interview with the BBC, Sainsbury’s boss, Simon Roberts, said “we are not going to ban customers”.

But he urged shoppers to wear a mask and shop alone.

“By doing that we will help keep everybody safe,” he said.

The Co-op also said it would not ban shoppers without masks from entering, and instead urged customers to take responsibility for wearing a face covering when visiting its stores, as it was mandatory by law.

Boss of Co-op Food Jo Whitfield said: “We’ve increased our in-store messaging to remind customers and government guidance does state that the police can take measures if members of the public don’t comply with this law.”

Iceland said it would take a similar approach, adding the vast majority of its customers continued to shop in compliance with the law.

“In view of the rising tide of abuse and violence being directed at our store colleagues, we do not expect them to confront the small minority of customers who aggressively refuse to comply with the law,” a spokesman added.

In England, the police can issue a £200 fine to someone breaking the face covering rules. In Scotland, Northern Ireland and Wales, a £60 fine can be imposed. Repeat offenders face bigger fines.