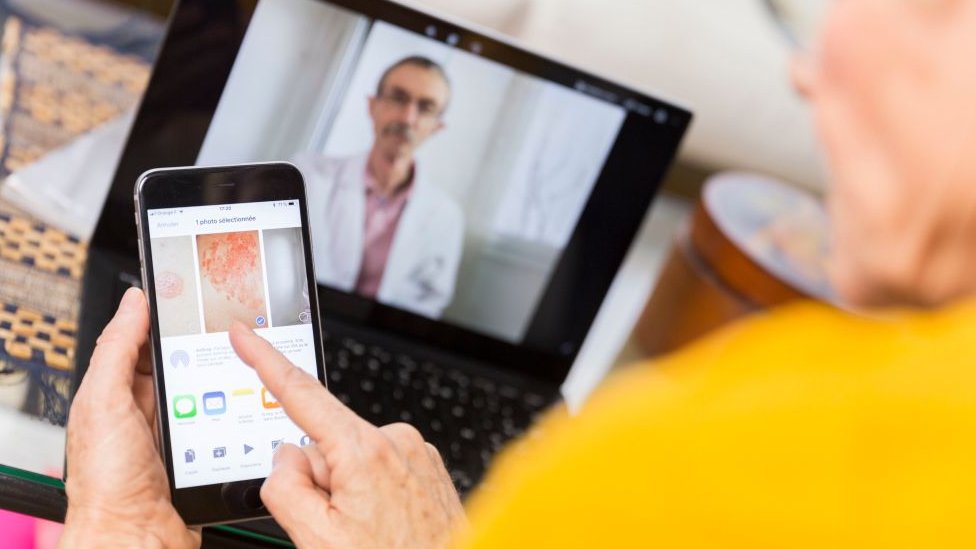 By Silvia MartelliBBC News, Washington DCPublishedduration1 hour agoimage copyrightUniversal Images Group via Getty ImagesTelehealth has been around for years but never really took off – until the Covid-19 pandemic. As US health centres had to close their doors, seeing a doctor online became a real alternative to the in-person visits of old.As the country still…

Telehealth has been around for years but never really took off – until the Covid-19 pandemic. As US health centres had to close their doors, seeing a doctor online became a real alternative to the in-person visits of old.

As the country still grapples with the pandemic, millions of Americans have been meeting doctors from all specialties – from urgent care to neurology – from the comfort of their homes.

And many happily so. Patients are as likely – or even a bit more likely – to highly rate their care providers following telephone or virtual doctor visits compared with in-person care, suggests a national Press Ganey survey released last month.

The healthcare company, which surveyed 1.3 million people across 154 medical practices between January and August 2020, found that patients felt positive about “all measures of providers’ concern, ability to establish a connection, and trust-building”.

Madison Russell, a 20-year-old disabled college student from Atlanta, Georgia, says that, throughout the pandemic, there has always been a doctor available whenever she had a matter of urgent care.

Even if she had to hang around a little in a virtual waiting room, Ms Russell says “it was still better” than cooling her heels in a doctor’s office as she could “be productive and do something else meanwhile, such as clean the kitchen”.

Telemedicine peaked at around 37% of all medical encounters in early May, decreased to 22% in early July, and remained steady at 15% since mid-August. But that’s still far above the pre-pandemic rate of less than 1%, according to Press Ganey.

A key reason behind this rise was the removal of regulatory hurdles. Before the pandemic hit, Medicare, the US programme for elderly Americans, limited how providers were paid for telemedicine appointments.

Most remote visits would not necessarily be reimbursed at the same rate as if they were happening in-person, says Dr Jessica Dudley, chief clinical officer at Press Ganey and assistant professor at Harvard Medical School.

Another limit was that providers also had to be licensed in the state their patients lived in.

“Covid-19 forced us to finally recognise the value of telemedicine in order to keep both patients and doctors safe,” says Dr Eric Singman, a neuro-ophthalmologist and associate professor at Johns Hopkins School of Medicine.

Patients began to appreciate the ability to connect with providers without putting themselves at risk during the pandemic and doctors have also embraced the switch, many trying telehealth for the first time.

Dr Singman’s virtual visits have been so successful that an organisation in Texas recently began working with John Hopkins to allow him to their see local patients remotely.

A patient’s health history is 90% of the diagnosis, says Dr Singman, “and history is something we do verbally”.

When the remote visits have a video component, doctors are able to do 95% of what they would do in person, he adds.

For some fields, like behavioural health, telemedicine may even be “many times better” than in-person visits, says Dr Joe Kvedar, chair of the board at the American Telehealth Association and professor of dermatology at Harvard Medical School.

This is because practitioners get to see patients in their everyday environment, which significantly helps understand them. Patients also tend to be more relaxed at homes rather than in a doctor’s office, he says.

Virtual mental healthcare has been especially important this year. The health insurance company Blue Cross Blue Shield has been receiving 28,000 telehealth claims a day, up from 200 in February – and half of those claims are for virtual mental health visits.

Elaine Vigneault, 44, from Las Vegas, had a recent telehealth appointment for a painful rash and said she prefers the virtual method to past in-person visits.

“It gives you the freedom to stay at home and not have to expose yourself to whatever might be in the waiting room,” she says.

As soon as she “put her face in front of the camera” and described the discomfort, the doctor was able to diagnose her with shingles, a viral infection, she says.

Ms Vigneault felt she had her doctor’s full attention, despite them not being in the same room.

In addition to reducing viral transmission risk, telemedicine is undoubtedly convenient. Delays, like getting stuck in traffic, are no longer an issue.

With it simply being a matter of logging onto a call or online appointment, it helps patients be on time, and in turn, doctors.

At the Mass General hospital in Boston, where dermatologist Dr Kvedar works, the average waiting time for urgent care appointments is five minutes from when you first start the video call.

Despite the benefits, there are downsides to virtual doctor’s visits.

Press Ganey found that patients tend to be dissatisfied with issues around scheduling appointments and technical problems like poor audio and video connections.

“If I had a complaint about telemedicine,” Ms Vigneault says, “it would be that there is no consistency.”

Each provider has their own way to book appointments and often use different technology, she says.

For one of her virtual appointments, Ms Vigneault was supposed to receive a text message followed by an email with some instructions, but she received neither.

However, that was a “minor hiccup” easily fixed by calling her provider, she says.

From a ‘back road’ to ‘highway’

Telemedicine went from being a “small back road that no one took” before Covid-19 to a “16-lane highway” in the field, says psychiatrist Dr Ken Duckworth, a senior medical director at Blue Cross Blue Shield of Massachusetts.

Prior to the pandemic, there were already signs that telemedicine would be “a huge thing for America and around the world,” says Dr Nicholas Lorenzo, chief medical officer at telehealth company MeMD.

“I hate to say that there is anything positive about the pandemic, but these last 10 months have really moved telemedicine forward seven to 10 years.”

The pandemic has proved the efficiency of telemedicine, which is surely here to stay.

But for that to happen it is crucial that “the payment model and regulatory challenges” continue to be addressed in a post-Covid world, says Harvard’s Dr Dudley.

“Telemedicine can be much more efficient than having to drive in somewhere, but that’s not going to happen unless organisations resource it, and in ways that they would normally resource the clinic.”