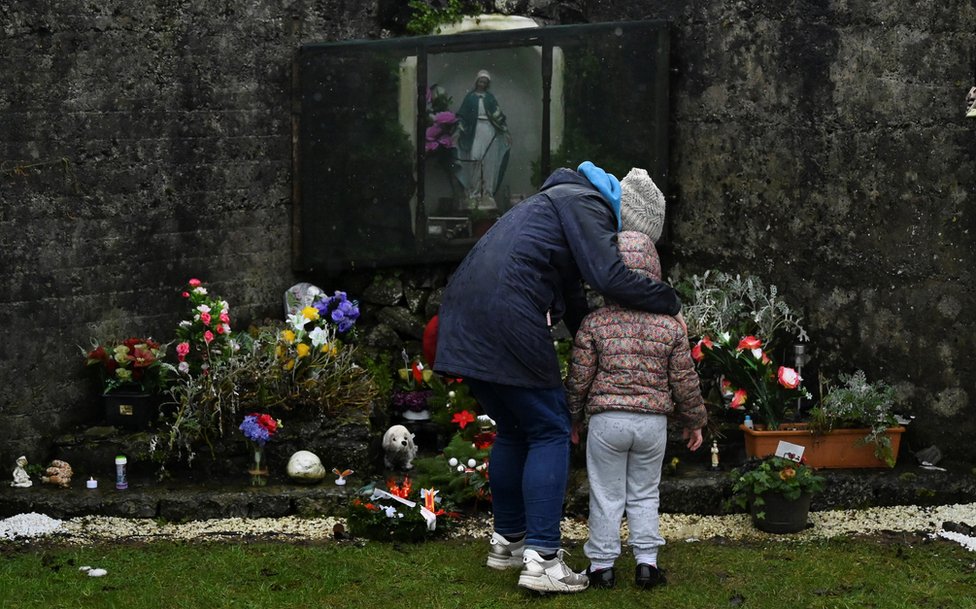 Publishedduration7 hours agoimage copyrightReutersimage captionThe scandal became an international news story when “significant human remains” were found on the grounds of a former home in County GalwayThe Taoiseach (Irish prime minister) has apologised after an investigation into the country’s mother and baby homes.The report found an “appalling level of infant mortality”.Established in the 19th and…

The Taoiseach (Irish prime minister) has apologised after an investigation into the country’s mother and baby homes.

The report found an “appalling level of infant mortality”.

Established in the 19th and 20th Centuries, the institutions housed women and girls who became pregnant outside marriage.

Micheál Martin apologised for the “profound and generational wrong” to survivors of mother-and-baby homes.

About 9,000 children died in the 18 institutions under investigation.

The Irish government said the report revealed the country had a “stifling, oppressive and brutally misogynistic culture”.

Following the report’s publication, which can be read in full here, Taoiseach Mícheál Martin said it described a “dark, difficult and shameful chapter” of Irish history.

On Wednesday Mr Martin issued a full apology on behalf of the state in the Dáil (Irish parliament).

He said the report highlighted a “profound failure” of empathy, understanding and compassion over a long period.

Stormont commissioned research into whether or not there should an inquiry held into the homes which operated in Northern Ireland, is due to be published by the end of January.

The commission that investigated the homes in the Republic of Ireland found that the number of children who died was about 15% of all those who were born in the institutions.

There were about 56,000 unmarried mothers and 57,000 children in the homes investigated by the commission.

Earlier on Wednesday Mr Martin also denied that comments he made about mother and baby homes report were “a sham, an insult or a whitewash”.

Speaking in the Dáil (lower house of parliament) he said he had not sought to diminish the role of the state or the church in what happened in the institutions.

“I spoke of the perverse moral code overseen by the church that was responsible for this in terms of its attitude to sexual morality,” he said.

Many children born in the homes were adopted or taken to orphanages run by Catholic nuns.

The leader of the Catholic Church in Ireland, Archbishop Eamon Martin, said he accepted that the Church was part of a culture in which “people were frequently stigmatised, judged and rejected”.

“For that, and for the long-lasting hurt and emotional distress that has resulted, I unreservedly apologise to the survivors and to all those who are personally impacted by the realities it uncovers,” he said.

“I believe the Church must continue to acknowledge before the Lord and before others, its part in sustaining what the report describes as a ‘harsh… cold and uncaring atmosphere’.”

The commission has made 53 recommendations, including compensation and memorialisation.

Its report stated that while mother-and-baby homes existed in other countries the proportion of unmarried mothers who were in the institutions in Ireland was probably the highest in the world.

The Sisters of the Sacred Hearts of Jesus and Mary, which ran some of the homes, said it was a “matter of great sorrow to us that babies died while under our care”.

The Sisters of Bon Secours religious order, which ran the mother and baby home in Tuam, County Galway, offered its “profound apologies” to the women and children who were there.