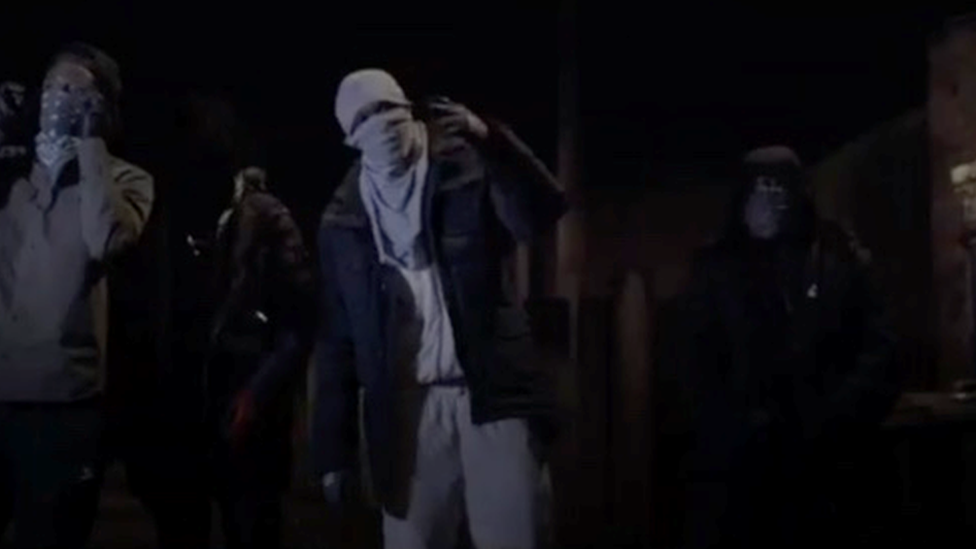 By Steve SwannBBC NewsPublishedduration4 hours agoimage captionDrill rap videos are increasingly being used as evidence in trialsDrill music has captured headlines since it started to emerge in the UK in 2012. With its often provocative lyrics, it’s been blamed by police for fuelling violence. It is also increasingly being used as evidence in trials with…

Drill music has captured headlines since it started to emerge in the UK in 2012. With its often provocative lyrics, it’s been blamed by police for fuelling violence.

It is also increasingly being used as evidence in trials with courts hearing allegations it incites gang rivalries. But some defence lawyers and academics say it stops defendants – often young black men – getting a fair trial. The BBC has looked into the detail of dozens of prosecutions across the UK.

Wood Green on 2 February 2019 was “more reminiscent of a Hollywood film than a winter’s night in north London”, the Old Bailey was told.

CCTV images showed mums with buggies fleeing as masked men ran amok with long knives. One man was shot and stabbed eight times but miraculously survived. Kamali Gabbidon-Lynck, 19, was less fortunate. He was chased into a hair salon where terrified customers, staff and children watched helplessly as he was stabbed to death.

Five people were charged with his murder and put on trial. Three of them were just 16.

The defendants could all be placed at the scene. But not all of them took part in the actual stabbing. The prosecution had to prove they were jointly guilty of murder.

This is where drill music came in. It helped to tie the defendants together and establish a motive.

There was a “beef” between street gangs, the court heard. Most of those on trial were linked to the gang known as Northumberland Park Killers. Their victims were linked to the rival Wood Green Mob. In these “postcode killings”, it was N17 versus N22.

Others had previously lost their lives in the long-running feud and the hatred was played out in drill videos uploaded to YouTube.

The court heard how ‘Trills’ Tyrell Graham, one of the defendants, had rapped about a fatal gang shooting the previous year. We were shown the lyrics.

Park Lane bopping, the opps dem dropping. Come here, I got you a coffin, 12 gauge long like Kelvin’s coffin.

The first line is a reference to attacking opponents. The second to the victim.

Drill lyrics were presented as evidence the defendants had embraced a culture of violence. The jury agreed what took place that night was an “organised sortie into enemy territory”. They found all five guilty of murder.

“These sentences take some very dangerous young criminals off the streets of the capital,” the Crown Prosecution Service said.

But for some experts the trial raised questions.

They asked is it fair for a violent musical subculture to be used as evidence of involvement in crime? Or does drill – unlike other music – encourage acts of violence?

Defenders of UK drill and rap argue it’s an art form that shouldn’t be taken literally.

It uses violent language and imagery, but as one defence lawyer puts it, the Rolling Stones sang ‘I’ll stick my knife right down your throat, baby’ but “it doesn’t mean (Mick) Jagger was involved in gangs”.

Eithne Quinn, an academic at the University of Manchester, worries about the use of drill as evidence.

She has worked as a defence expert witness on almost 20 trials and says juries are often shown videos featuring young men in balaclavas and masks, rapping about stabbings and drug dealing.

Dr Quinn says drill rap is “a very violent form” of expression. “It’s out to shock. The music’s meant to alienate parents.”

But she says the provocative posturing of the rapper is part and parcel of a popular genre and shouldn’t be taken at face value.

“It has no place in the courtroom,” says Dr Quinn who set up the Prosecuting Rap research project to widen understanding of what she considers the dangers of relying on drill and rap for court testimony.

She acknowledges “there are isolated instances when drill has incited violence” but says drill is now being used in lots of cases and although it can initially look like there’s a correlation between a rap and a violent act, “when you look at it properly it falls away, it’s not credible”.

The BBC looked at nearly 70 trials across the UK from 2005 where drill and rap was used in evidence. Most were in the last two years and often rappers were on trial. Many featured allegations of murder.

The vast majority of the defendants were young black men and boys. We identified a total of 232 people facing trial in the 67 cases. Only eight of them were female. Almost half were teenagers.

We should be “seriously concerned about what’s happening in our courtrooms”, says Abenaa Owusu-Bempah, an expert in criminal evidence at the London School of Economics.

She says the high number of black defendants “indicates a targeting of rap music because we aren’t seeing it with other genres of music”.

Prosecutors draw on “stereotypical imagery about young black men and boys as criminals” and use drill “to amplify pre-existing stereotypes”, she says.

She has identified 30 cases which were appealed. Only one was successful.

For prosecutors that indicates the reliability and relevance of this type of evidence.

But for Assistant Professor Owusu-Bempah, “police, prosecutors and courts do not acknowledge or appreciate the artistic value of rap music”.

Rosca Onya was 17 when he was convicted of firearm offences in 2010, after being arrested in a taxi by armed police in south-east London. Officers found a loaded handgun in a footwell of the car.

It was before the UK drill scene took off but prosecutors used YouTube videos of him rapping as evidence of his gang membership.

Onya protested they were “to attract the attention of a record producer”.

At an appeal hearing judges had to consider if “the video was part of art” or “part of the life of warring gangs in south London”.

In November 2010 they ruled the videos were relevant despite being made six months before the crime as they helped the jury understand the defendant’s “disposition”. His conviction was upheld and he spent over nine years in prison where he was rehabilitated and given therapy.

First being exposed to violence growing up in Democratic Republic of Congo, he says he was encouraged into street gangs by older boys soon after arriving in the UK as a nine-year-old refugee.

He acknowledges the police have to protect the public and doesn’t deny his involvement in crime. But he says his youthful rapping was used unfairly against him in court.

“Young kids that were growing up in an environment that was chaotic in south London that’s all we knew, that’s all we saw. Of course I’m gonna talk about what I’m seeing around me… the drug dealing and young people getting into trouble.”

He says his raps portrayed him as “a monster”. His lyrics were presented as evidence that “I was gonna shoot my rival gangs and that wasn’t the case”. Rap is a form of poetry in which “you are telling a story”, he adds.

Now, aged 29 and out of prison, Onya is using rap music to rebuild his damaged life.

“Music is a go-to tool for a lot of people to cope,” he says.

This week he is recording a new track, Patience, following the success of his song in praise of Jack Merritt, the man who helped turn his life around and who was murdered in a terrorist attack in London.

Onya isn’t a drill rapper but he says it isn’t dangerous. “These are kids finding a voice and trying to do something better with it.”

‘Think about what you’re saying’

Recently-issued guidance from the CPS to prosecutors noted that “gangs are increasingly using drill music and social media to promote gang culture”.

They point to ‘diss’ videos in which rivals are taunted.

In December 2018 five young people were accused of killing a 17-year-old boy in Nottingham because of a dispute inflamed by drill videos. Lyrico Steede mocked his rivals as the “Athlete Gang’ because they ran away from fights.

In retaliation he was lured to a park and repeatedly stabbed. Days later one of his alleged killers, Kasharn Campbell, 19, could be seen rapping in a video allegedly referring to the stabbing.

He and another man were convicted of murder. Three teenagers were found guilty of manslaughter.

“It is not for me to express a view about your or anyone’s taste in music,” the judge told the defendants. “But this is a case about stabbing, and so much of that music is about stabbing.”

In June 2019 the Met Police set up Project Alpha where officers from police gang units monitor social media sites for evidence or intelligence about crime.

That means monitoring drill videos where “gangs have openly called out each other”, says Detective Inspector Kieran McAuliffe.

“What we’re looking at is opportunities where we can intervene to stop some of the violence on the streets of London.”

New figures given to the BBC show that since November 2016 the Met has made 579 referrals for “potentially harmful content” to be removed from social media platforms – 522 were removed, mostly from YouTube.

The police deny they are censoring freedom of expression. “We are not here to suppress drill music. It’s fine to use it as an outlet,” says DI McAuliffe, but he adds: “Just think about what you’re saying.”