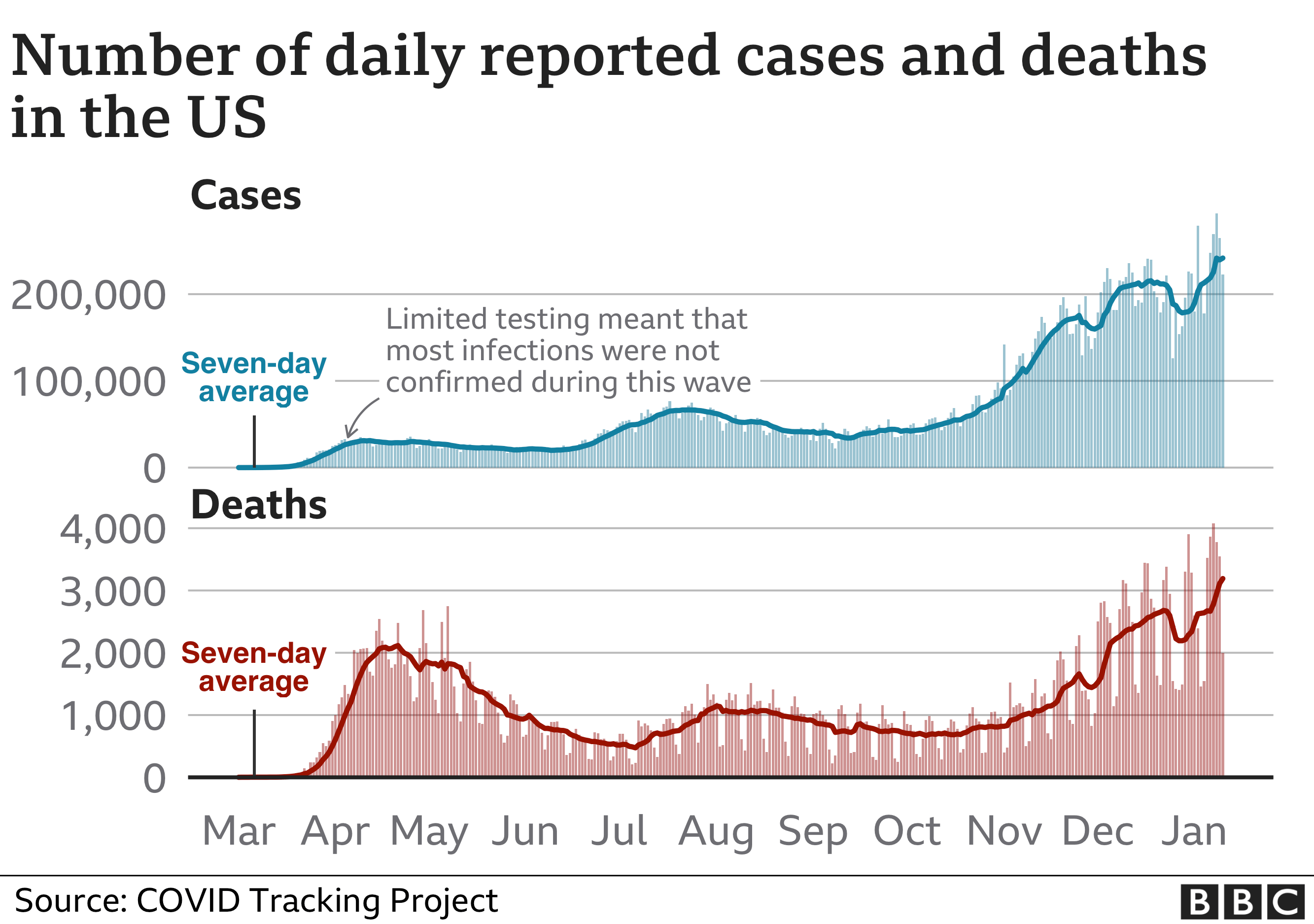 Publishedduration1 hour agoimage copyrightGetty Imagesimage captionBonnie Watson Coleman is one of three Democratic lawmakers to have tested positive since the invasion of the US CapitolThree US lawmakers have tested positive for the coronavirus after sheltering for hours with colleagues during last week’s deadly assault on the Capitol.House Democrats Bonnie Watson Coleman, Pramila Jayapal and Brad…

Three US lawmakers have tested positive for the coronavirus after sheltering for hours with colleagues during last week’s deadly assault on the Capitol.

Last Wednesday they hunkered down in secure rooms, seeking refuge from an invasion of Congress in which five people died.

Some Republicans were not wearing masks during the ordeal, footage suggests.

However, CBS pictures from inside the chamber show Ms Jayapal was herself not wearing a mask at one point.

Medical experts fear more lawmakers may have contracted the disease, potentially amounting to a super-spreader event at a time when coronavirus infections and deaths continue to rise in the US.

The US has recorded the highest number of coronavirus infections (22.6 million) and deaths (367,000) in the world, with no sign of the epidemic abating, despite the limited roll-out of vaccines.

Over the weekend, top congressional doctor Brian Monahan told lawmakers and congressional staff who shielded together from the riots to get tested.

“The time in this room was several hours for some and briefer for others,” Mr Monahan said. “During this time, individuals may have been exposed to another occupant with coronavirus infection.”

Mr Monahan did not say how many lawmakers were in the room, but called on them to observe social-distancing measures and wear masks.

New Jersey Democratic Representative Bonnie Watson Coleman was the first lawmaker to confirm she had tested positive on Monday. In a tweet, the 75-year-old cancer survivor said she was resting at home with “mild, cold-like symptoms”.

Ms Jayapal, a Democrat from Washington state, and Illinois congressman Mr Schneider revealed they had tested positive on Tuesday.

All three Democrats accused Republican lawmakers of refusing to wear masks as they huddled together for safety last Wednesday.

“Any member who refuses to wear a mask should be fully held accountable for endangering our lives,” Ms Jayapal wrote, calling for mask transgressors to be fined.

I just received a positive COVID-19 test result after being locked down in a secured room at the Capitol where several Republicans not only cruelly refused to wear a mask but recklessly mocked colleagues and staff who offered them one.https://t.co/wVmgroKsdf

The wearing of masks has been an explosive political issue throughout the pandemic in the US, with some lawmakers openly refusing to don a face covering.

A Republican congressman, Jake LaTurner of Kansas, tested positive for Covid-19 after participating in a House vote to reject Arizona’s presidential election results on Wednesday.

But on Tuesday, Mr LaTurner’s spokesperson told the Topeka Capital-Journal newspaper that he was not in the secure area of the Capitol building where multiple members have since tested positive.

On Friday Robert Redfield, director of the Centers for Disease Control and Prevention (CDC), had warned that Wednesday’s rioting would probably have significant health consequences.

“You have to anticipate that this is another surge event,” he told the McClatchy news agency. “You had largely unmasked individuals in a non-distanced fashion, who were all through the Capitol.”

Coronavirus has swept through the heart of the American political establishment during the pandemic. One notable outbreak happened in September last year, when an event was held at the White House to announce the nomination of Amy Coney Barrett as a Supreme Court justice.