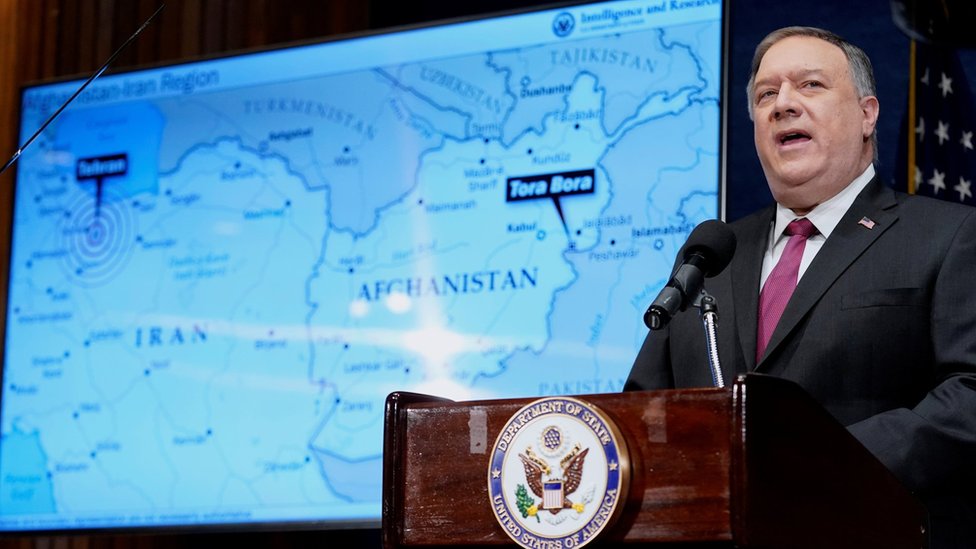 Publishedduration6 hours agoimage copyrightReutersimage captionMike Pompeo said al-Qaeda was “operating under the hard shell of the Iranian regime’s protection”US Secretary of State Mike Pompeo has publicly accused Iran’s government of allowing the jihadist network al-Qaeda to establish a “new home base” there.”Unlike in Afghanistan, when al-Qaeda was hiding in the mountains, al-Qaeda today is operating…

US Secretary of State Mike Pompeo has publicly accused Iran’s government of allowing the jihadist network al-Qaeda to establish a “new home base” there.

“Unlike in Afghanistan, when al-Qaeda was hiding in the mountains, al-Qaeda today is operating under the hard shell of the Iranian regime’s protection,” he told the National Press Club.

Mr Pompeo provided no concrete evidence to support his allegations.

No one is fooled. All 9/11 terrorists came from @SecPompeo‘s favorite ME destinations; NONE from Iran.

Last November, Iran denied a report that al-Qaeda’s second-in-command Abdullah Ahmed Abdullah, also known as Abu Muhammad al-Masri, had been shot dead in Tehran in the summer by Israeli agents, following a request from the US.

At Tuesday’s news conference in Washington, Mr Pompeo said he could confirm for the first time that Masri had died on 7 August, although he gave no further details.

He asserted that people were wrong to believe that a Shia Muslim power (Iran) and an extremist Sunni group that considers Shia heretics were bitter enemies.

“Masri’s presence inside Iran points to the reason that we’re here today. Al-Qaeda has a new home base: it is the Islamic Republic of Iran.”

“As a result, [Osama] Bin Laden’s wicked creation is poised to gain strength and capabilities.”

Since 2015, Mr Pompeo alleged, Tehran had allowed al-Qaeda figures in the country to freely communicate with other members and to perform many functions that were previously directed from Afghanistan and Pakistan, including authorisation for attacks, propaganda, and fundraising.

“The Iran-al-Qaeda axis poses a grave threat to the security of nations and to the American homeland itself, and we are taking action,” he added.

The secretary of state said the US intended to give the status of Specially Designated Global Terrorists to two al-Qaeda leaders that it believed were based in Iran: Mohammed Abbatay, also known as Abdul Rahman al-Maghrebi, and Sultan Youssef Hassan al-Arif.

REWARD! Up to $7 Million for Information
‘Abd al-Rahman al-Maghrebi

Al-Maghrebi is an Iran-based key leader of the al-Qa’ida terrorist.

If you have information on his location or identification, you could be eligible for a reward. Text your info to RFJ. pic.twitter.com/CzEdZi3XdV

The US will also offer a reward of up to $7m (£5.1m) for information leading to the location or identification of Maghrebi. Rewards are already offered for two other top al-Qaeda figures allegedly in Iran – Saif al-Adel and Yasin al-Suri.

A number of al-Qaeda militants and family members of Osama Bin Laden fled to Iran after the US-led invasion of neighbouring Afghanistan in 2001. Iranian officials said they crossed the border illegally and that they were arrested and extradited to their home countries.

After news of Masri’s death emerged last year Iran’s foreign ministry insisted that there were no al-Qaeda “terrorists” on its soil.

And on Tuesday, a spokesman told state media: “Iran has been a victim of US state terrorism and affiliated groups for years and has had a clear… record in the fight against al Qaeda and Islamic State.”

Reuters news agency cited a former senior US intelligence official as saying Iranian authorities were never friendly with al-Qaeda before or after 9/11, and that “any claims of current co-operation should be viewed warily”.

Analysts also questioned the timing of Mr Pompeo’s announcement, saying he appeared to be trying to make it harder for President-elect Joe Biden to re-engage with Iran and rejoin the 2015 Iranian nuclear deal.