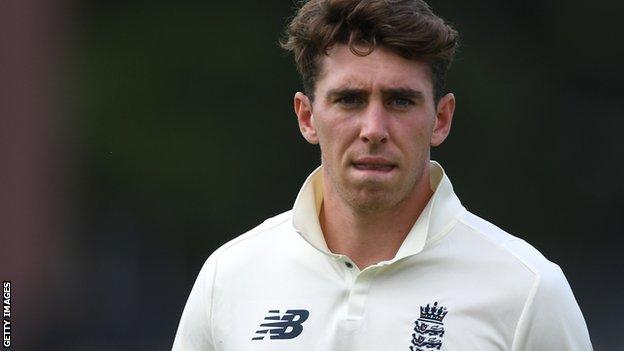 At Essex, they call Dan Lawrence ‘The Kid’.

He’s the son of a groundsman and the brother of a wrestler.

If he makes his England debut in the first Test against Sri Lanka in Galle on Thursday, it would be the latest step up for a 23-year-old who played men’s cricket at the age of nine, made a hundred in the Chingford first team at 15 and scored his maiden Essex century at 17.

A life in cricket was always likely for the boy who grew up on a cricket ground, living in the accommodation that comes with dad Mark’s job as groundsman at Chingford, the Essex Premier League club on the north-east edge of London.

“He was about six or seven,” Mark told BBC Sport. “He just picked a bat up and I thought I’d show him how to hold it, but I didn’t have to. He held it the right way and his stance was unbelievable. It was ridiculous.

“He had watched people at Chingford and naturally grasped it.

“When he went to bed he’d have batting gloves on and a bat next to him.”

Dan grew up with brother Tom in the flat that is built into the Chingford pavilion. Later, when Dan was older, home would only be a few yards to stagger from the clubhouse bar. As boys, Dan and Tom would play on the outfield as Mark tended to the square.

Dan doesn’t recall spending too much helping out with the ground, other than Mark having an “obsession” with cutting grass.

“When they were little, Dan and Tom had a ride with me on the mower,” said Mark. “But, really, Dan was more interested in practising and Tom would be jumping around, doing somersaults.”

Whereas the somersaults have led Tom, three years younger than Dan, to the squared circle – he is training as a professional wrestler at Lucha Britannia in Bethnal Green and performs under the name ‘David Wreckham’ – the hours in the nets helped Dan rapidly rise through the ranks on the way to a career as a cricketer.

Although he managed one game for Chingford in 2020 – rain-affected, so he didn’t bat – the Stags haven’t seen much of him since a 2014 season when he piled on more than a thousand runs, including three hundreds and six half-centuries.

That golden summer came two years after the breakthrough century as a 15-year-old on a September Saturday at Harlow.

“I was scoring at Harlow when he got that ton,” said Mark. “I thought then he’d definitely make it. Harlow had a quick bowler and he wasn’t fazed by him at all.”

Success with Essex was almost instant, 161 in his second first-class match against Surrey at The Oval in April 2015. He was 17 years and 290 days, the third-youngest player in the history of the County Championship to make a ton, for which he received a congratulatory handshake from then Surrey batsman Kevin Pietersen.

A similarly impressive match-saving hundred against James Anderson’s Lancashire as a 19-year-old, two County Championship titles, success in the Bob Willis Trophy and a T20 Blast crown have followed.

If a first-class average of 37.96 doesn’t sound stellar, it is worth remembering that Essex’s Chelmsford home nips for the seamers and turns for the spinners. Those who know Lawrence talk of a unusually mature outlook for a young man, albeit one who is still learning to drive a car.

In Australia last winter, as part of the England Lions side that beat Australia A, Lawrence scored 125 in the first-class match at the Melbourne Cricket Ground, to go with another century and two fifties across the tour. He also weighed in with 11 wickets with his off-breaks.

His reward was a place in England’s Test bubble in the home summer of 2020, an experience overshadowed by the sadness of the death of his mother after a long illness.

“Mum had been ill for a couple of years so as sad as it was, I had mentally prepared myself for the worst happening,” he said on Monday. “That made things quite tough for a couple of months, then it was lovely to go back and play some cricket for Essex around my really good mates, who I needed at that time. They were all fantastic.”

Now back in the England fold after short stint with Brisbane Heat in Australia’s Big Bash League, Lawrence looks set to take a spot in a batting line-up that is without Ben Stokes, Rory Burns and Ollie Pope.

If he does make his bow, he will join county colleague Alastair Cook and current England skipper Joe Root in playing his first Test on the subcontinent.

“I’m a big watcher, so I’ve parked myself at the back of the nets and tried to take little bits from anyone,” said Lawrence of his time in Sri Lanka.

“The good thing about the England set-up with the Under 19s and the Lions is that you do get experience in Asia. Last year we had a spin camp in India for a month where I learned a lot and wrote a lot of stuff down. I’ve gone back to that to refresh the brain on how I went about things.”

Much is made of Lawrence’s technique, one tinged with unorthodoxy, perhaps inspired by boyhood heroes Pietersen and AB de Villiers. He scores heavily through the leg side. The bowling action that propels his off-breaks is also idiosyncratic.

“I am a big one for trying to do things in my own way,” he said. “You could call it unique but it’s not to me.

“I’m trying to stick to my guns and what has made me successful so far. I don’t want to come into an England environment and completely change everything because that wouldn’t be true to myself.

“I do believe I can be really successful at this level – it’s just a matter of going and doing it now.”

Back at Chingford, in the flat overlooking the cricket ground where it all began, Mark will be awake in the small hours of Thursday morning, “gutted” that the coronavirus pandemic is preventing him from being in Galle.

“I’m the worst watcher in the world when it comes to Dan. If he plays, I don’t know what I’ll be doing.

“When he faces his first ball, I’ll have my head under the pillow. I settle down when he gets to about 20, but before then I’m all over the place.”

Son of a groundsman, brother of a wrestler.

‘The Kid’ is on the verge of becoming an England batsman.