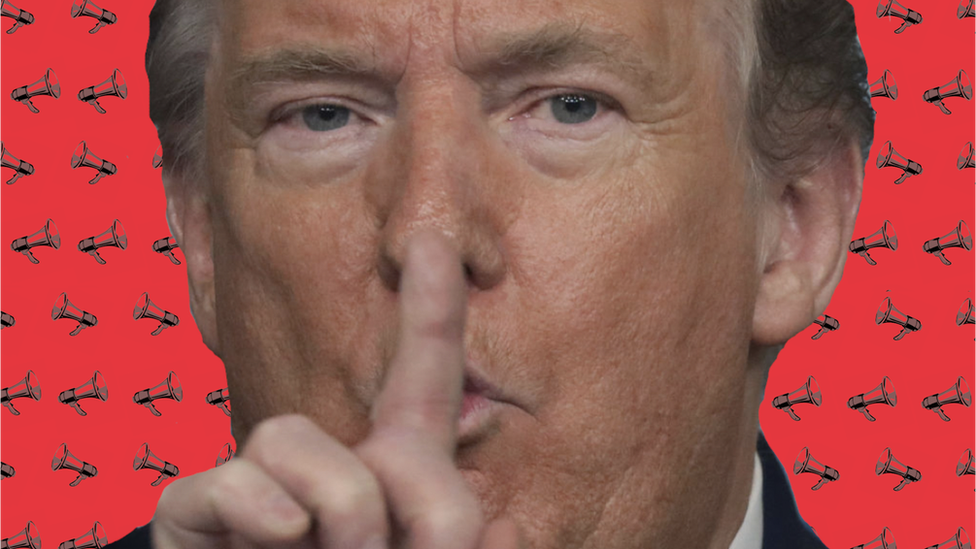 By Joe TidyCyber reporter Publishedduration1 hour agoimage copyrightGetty ImagesIf you ever needed proof of the power of “Big Tech” then the downfall of Parler on Monday morning is a good place to start.I, like many others, logged on to the controversial social network to see what would happen after 11:59 Pacific Time in the US.This…

If you ever needed proof of the power of “Big Tech” then the downfall of Parler on Monday morning is a good place to start.

I, like many others, logged on to the controversial social network to see what would happen after 11:59 Pacific Time in the US.

This was the deadline Amazon had given the app to find a new host service before it booted the platform offline for allegedly containing violent content.

It was being seen as a significant moment in ongoing efforts by US tech giants to “deplatform” Donald Trump and some of his extreme supporters after the US Capitol Hill riot last week.

The clock struck 12:00 though and nothing happened. I and millions of other users were still able to search and post just as usual.

But then, like dominos, users around the world starting reporting problems. For me, at about 12:10, everything stopped working. No content found, a message read.

With a flick of a switch then, Parler, a fast-growing app seen by some as a free-speech alternative to Twitter, was no more. For now.

Parler can, and probably will be able to, find a new host provider but losing Amazon Web Services (AWS) – the largest website hosting provider in the world – means other major providers are likely to turn away their business too.

Technology and ethics researcher Stephanie Hare says it’s not the first time a major US tech firm has taken a site down for similar reasons.

“Amazon’s action against Parler is not unprecedented, as we have seen other US companies such as Cloudflare remove content delivery services and DDoS (distributed denial-of-service) protection and support to white supremacist website The Daily Stormer in 2017 and 8Chan in 2019 after that website was used by a gunman to post materials before he went on to massacre people in El Paso, Texas,” she said.

It’s not just AWS which has taken action against Parler. Google and Apple have also kicked the service off their app stores too.

Again, this is not unheard of.

Gab, another website billing itself as a free-speech platform but accused of being a haven to the far-right and extremists, is also banned from the app stores. It can still be accessed through a web browser and claims to have seen a surge in users in recent days.

And as part a crackdown on accounts associated with the attack on Congress, on Monday Twitter announced it has shut down “more than 70,000 accounts” linked to the QAnon conspiracy theory.

Facebook meanwhile said it was removing all content mentioning “Stop the Steal” – the slogan associated with Mr Trump’s unsubstantiated claims that the November election was rigged.

What is unprecedented though is the targeted approach against the president.

Since Mr Trump’s supporters attacked the US Capitol last week, he has been banned from using some of the biggest social platforms including Twitter, Facebook, Instagram, Snapchat and Twitch.

YouTube has deleted some of his videos but said his channel is effectively on its last chance.

European leaders, including German Chancellor Angela Merkel, have described the move as “problematic”.

EU commissioner Thierry Breton described the events on Capitol Hill as “the 9/11 moment of social media”, writing in Politico that “the fact that a CEO can pull the plug on Potus’ [President of the United States] loudspeaker without any checks and balances is perplexing”.

UK Health Secretary Matt Hancock said social networks were now “taking editorial decisions”, adding that platforms were “choosing who should and shouldn’t have a voice”.

He tweeted: “The ban of Donald Trump on Twitter is an unacceptable act of censorship. Of course, Twitter is a private company, but we have seen many examples in Russia and China of such private companies becoming the state’s best friends and the enablers when it comes to censorship.”

The fact is, social networks are private companies. Just as a private members’ club can make house rules for its members, so can the likes of Facebook’s Mark Zuckerberg or Jack Dorsey, the founder of Twitter.

One of the key rules imposed has been, until now, to consider politicians’ content important to public discourse.

But since the start of the coronavirus pandemic things have changed significantly and the companies have taken increased action against world leaders.

It wasn’t until May that Twitter took similar action against the US president when moderators put a warning behind a tweet that they said glorified violence.

The president tweeted about the Black Lives Matter protests saying: “When the looting starts, the shooting starts”.

Social media commentator Matt Navarra says Mr Trump’s ban sets “a pivotal precedent” in the way platforms control who can use them and what users can post.

Trump vows to fight back

Some analysts think the action may be a turning point for tech moderation worldwide.

On Monday Facebook announced it had removed a network of accounts it says were directly linked to the Ugandan government, and being used to allegedly manipulate the forthcoming election.

Privacy attorney and technologist Whitney Merrill suggests the move points to a change in moderation stance from the tech giants.

“Social networks’ rules and guidelines are evolving over time which is normal. But they aren’t being consistently applied throughout the world. I think the president’s removal might be the beginning of a purge for similar behaviour globally.”

In his final hours on Twitter, Mr Trump once again blamed a piece of US legislation called Section 230 for “banning” free speech. During his presidency he threatened to repeal the law which makes social networks largely exempt from liability for their users’ post.

Many argue that removing the protection would actually harm free speech as networks would be forced to moderate far more than they currently do.

US President-elect Joe Biden has also stated that he would like to repeal the law to increase moderation and reduce the spread of fake news.

In the same final tweet Mr Trump said that he has been negotiating with “various other sites” and that there would be “a big announcement soon”.

If the events of recent days are anything to go by, Mr Trump and some of his supporters face an uphill struggle against not just lawmakers but tech giants too before they can establish themselves on mainstream social media.