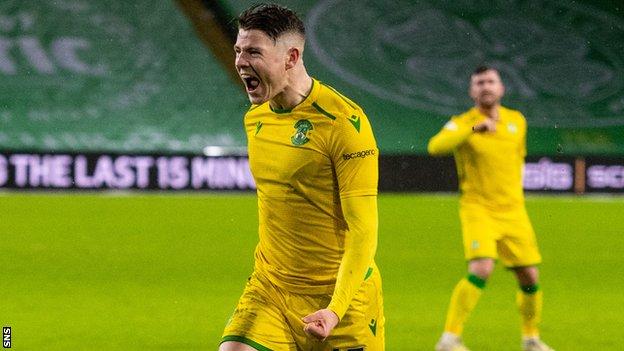 Kevin Nisbet struck in added time to seal a point for HibernianDepleted Celtic ended a day of intense scrutiny with a draw against Hibernian that leaves the defending champions 21 points behind Scottish Premiership leaders Rangers.Celtic, missing 13 isolating players and boss Neil Lennon after a positive Covid-19 test, moved into the lead through David…

Depleted Celtic ended a day of intense scrutiny with a draw against Hibernian that leaves the defending champions 21 points behind Scottish Premiership leaders Rangers.

But Kevin Nisbet struck in stoppage time to level for Hibs and take them to within a point of third-place Aberdeen.

The preamble to the match had been dominated initially by controversy over Celtic’s winter training camp in Dubai last week, with Nicola Sturgeon questioning the trip.

Then, after news of Christopher Jullien’s positive coronavirus test on Monday morning, the first minister warned Scottish football not to “abuse” its privileges during lockdown as criticism of Celtic grew throughout the day.

The unfamiliar line-up showed six changes, though one of those was enforced by Nir Bitton’s suspension, and teenage American forward Cameron Harper was handed a debut.

Hibs’ request for Celtic players to be retested pre-match was turned down and Jack Ross made five changes to his side, including giving a first appearance to on-loan Arsenal goalkeeper Matt Macey.

And it was the visitors who tried to stamp their authority on the game early on with Nisbet heading over and later testing Conor Hazard with a shot after Joe Newell’s strike had been pushed out by the Celtic stopper.

Harper shot instead of passing from a promising position in Celtic’s first incisive move and long-range efforts from Ismaila Soro and Laxalt drew fine saves from Macey.

Turnbull’s superb chip found Callum McGregor in behind the Hibs defence but he could not make the right connection.

Lewis Stevenson made his 500th Hibernian appearance as a half-time replacement for Josh Doig and Harper limped off to be replaced by another Celtic debutant Armstrong Oko-Flex on the hour.

Chances were at a premium and Hazard was quick off his line to snuff out a chance for Hallberg and Drey Wright’s replacement Christian Doidge could not get a header on Jamie Murphy’s teasing corner.

Mikey Johnston claimed unsuccessfully for a penalty after going down in the Hibs box following Ryan Porteous’ challenge and soon made way for Karamoko Dembele.

Hibs also made a change with Stephen McGinn replacing Hallberg and the midfielder fouled Turnbull to give the Celtic midfielder the chance to put Celtic ahead, and he did. It was a fantastic strike by Turnbull and his fifth goal for Celtic.

Hibs went back on the attack and won a free-kick of their own after Laxalt’s foul on Paul McGinn and the latter’s header from Stevie Mallan’s delivery was cleared on the line only for Nisbet to fire high into the net for parity.

Man of the match – Conor Hazard

Unsurprisingly, Celtic took a while to settle into the match and lacked a focal point in the absence of Leigh Griffiths and Odsonne Edouard.

For long spells in the second half, the hosts did not look likely to win but took their chance when it came. Defensively, though, they were caught out badly at a set play.

Hibs may rue not throwing more caution to the wind at 0-0 but, after three league defeats, a point in Glasgow is a positive result.

Celtic coach Gavin Strachan: “The players put a lot into the game and we thought we did enough to nick it. The sucker punch at the end was frustrating. We were hoping we would have enough bodies back to see that out.

“There’s a lot of football still to be played and you never know what’s going to happen. Obviously it’s a frustrating time just now but we need to get the win on Saturday, keep racking up the points and see what happens.”

Hibernian head coach Jack Ross: “We wanted to come and win the game. I certainly think we merited taking something from it. It’s good for us to stop the bleeding. It hopefully just propels our side in the right direction again.

“Kevin Nisbet’s goalscoring return has been excellent. The accuracy of the finish and the trust in his finishing ability with the goal has to be like that otherwise I don’t think he scores it.”

Celtic will still be without their isolating players when they host Livingston on Saturday (15:00 GMT). Hibs are at home to Kilmarnock at the same time.