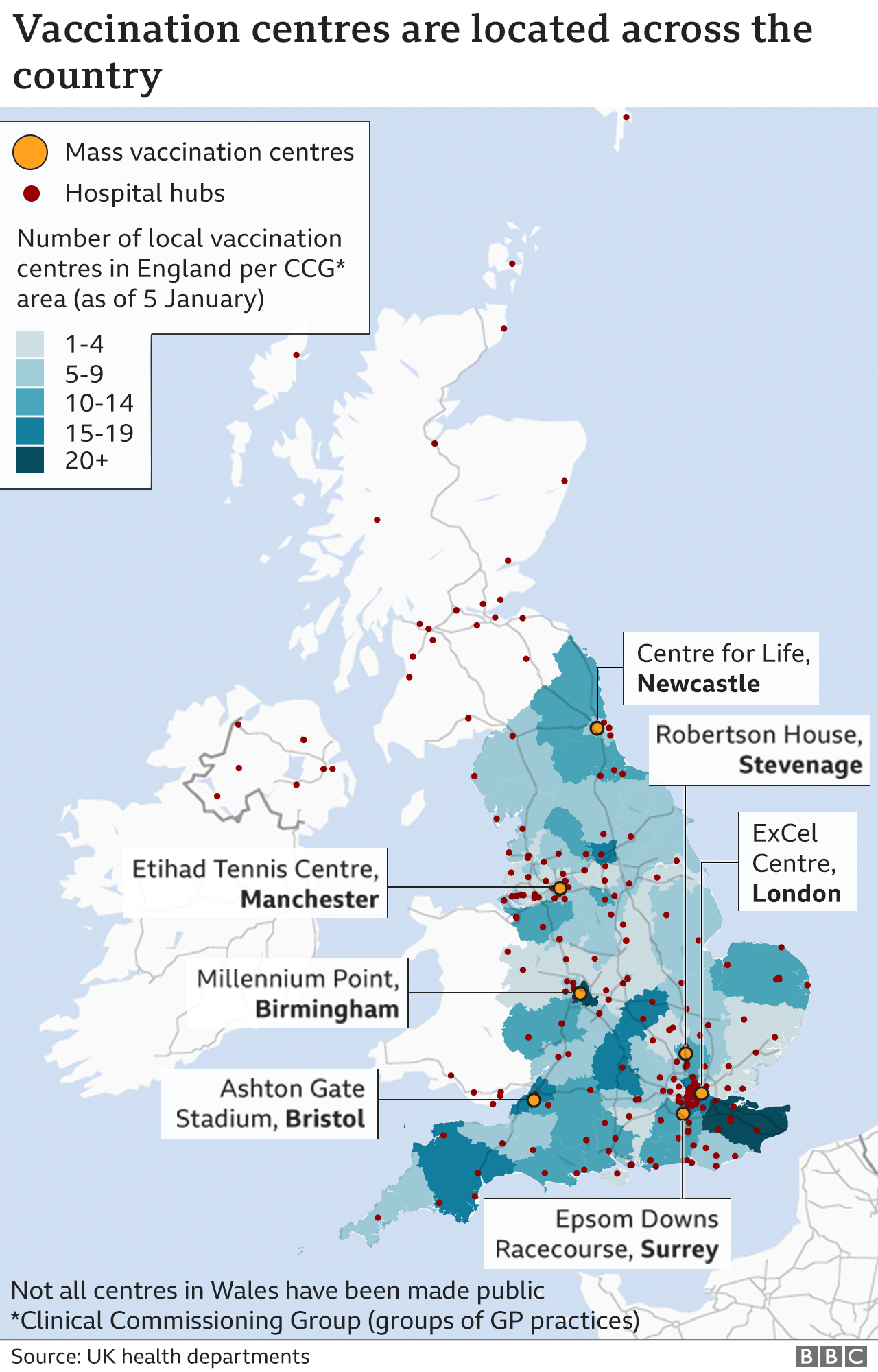 Publishedduration1 hour agomedia captionMatt Hancock: “The bubbles policy will stay”.The UK is at the “worst point” of the pandemic, Health Secretary Matt Hancock has warned, but said the actions of the public “could make a difference”.At a No 10 briefing, Mr Hancock pleaded with people to follow the government’s Covid rules until the vaccine could…

The UK is at the “worst point” of the pandemic, Health Secretary Matt Hancock has warned, but said the actions of the public “could make a difference”.

At a No 10 briefing, Mr Hancock pleaded with people to follow the government’s Covid rules until the vaccine could provide a “way out” of the pandemic.

The government earlier published its plan to immunise tens of millions of people by spring.

So far 2.3 million people in the UK have had a first Covid vaccine shot.

And a total of 2.6 million doses have been given out across the country, with some people having received both doses.

Mr Hancock said the new variant of coronavirus was putting the NHS under “significant pressure”, adding it was “imperative” that people limit their social contacts.

“The NHS, more than ever before, needs everybody to be doing something right now – and that something is to follow the rules,” he said.

“I know there has been speculation about more restrictions, and we don’t rule out taking further action if it is needed, but it is your actions now that can make a difference.”

The health secretary said he could “rule out” tightening restrictions by removing support and childcare bubbles, however.

His comments follow similar warnings from Prime Minister Boris Johnson, and England’s chief medical officer Prof Chris Whitty, who said that the next few weeks will be “the worst” of the pandemic for the NHS.

According to the latest figures, there have been another 529 deaths within 28 days of a positive test in the UK, and another 46,169 cases reported. There are also more than 32,000 people in hospital with coronavirus, data shows.

Matt Hancock has previously said he’s learned to rule nothing out when it comes to dealing with the pandemic.

But today he took the unusual step of doing just that.

Support bubbles and childcare bubbles, hugely valued by so many, will stay.

Senior Whitehall sources have previously told me bubbles were “untouchable” but for a minister to say as much, so explicitly and on the record, means there’s now very little wriggle room for the government to change its mind.

Ministers will know that scrapping bubbles, for those that rely on them, could have proved deeply unpopular. But this certainty is a rarity.

Whilst the current emphasis is on compliance, the idea of toughening up controls in other areas is not being ruled out.

The vaccine delivery plan says it is expected to take until spring to give a first dose to all 32 million people in the UK’s priority groups, including everyone over 55 and those who are clinically vulnerable.

Under the plan, the government has pledged to carry out at least two million vaccinations in England per week by the end of January, which it says will be made possible by rolling out jabs at 206 hospital sites, 50 vaccination centres and around 1,200 local vaccination sites.

It also reiterates the government’s aim of offering vaccinations to around 15 million people in the UK – the over-70s, older care home residents and staff, frontline healthcare workers and the clinically extremely vulnerable – by mid-February.

According to Mr Hancock, two fifths of over-80s have now received their first dose, and almost a quarter of care home residents have received theirs.

Also at the briefing, NHS England’s national medical director, Prof Stephen Powis, said the NHS was aiming to vaccinate the rest of the top nine priority groups by April, with a final push to offer all adults over 18 a jab by the autumn.

He stressed it would take until February before there were “early signs” that vaccination was leading to a drop in hospitalisations.

The country has still not seen the full impact of the Christmas loosening of lockdown restrictions, Prof Powis added, although he noted there are now 13,000 more Covid patients in hospital than there were on Christmas Day.

Speaking in Bristol earlier, Mr Johnson warned the vaccination programme was in a “race against time” because of pressure on the NHS.

He said it was “a very perilous moment because everyone can sense the vaccine is coming in – my worry is that will breed false complacency”.

The newly-published vaccination plan also says ministers are aiming to offer jabs at more than 2,700 sites across the UK.

And it says that daily vaccination figures for England will be published from now on – showing the total number vaccinated to date, including first and second doses.

Earlier, NHS England’s chief executive, Sir Simon Stevens, told MPs that there was a “strong case” for asking the the Joint Committee on Vaccination and Immunisation (JCVI) to consider prioritising “teachers and other key workers” for vaccination after the “first nine [priority] groups have been vaccinated”.

A quarter of coronavirus admissions to hospital are for people under the age of 55, he added.

In the first four weeks of the vaccination campaign, the NHS did 1.3 million vaccinations.

News that in the past week almost the same again has been done shows progress is being made – even though there has been some concern rollout to care home residents has been slower than hoped.

Hitting two million doses a week is the next target – and is something the NHS is aiming to get close to this week.

With more vaccination sites opening by the day, it should be achievable as long as there is good supply.

There is already enough vaccine in the country to vaccinate all 15 million people in the highest at-risk groups that have been promised an offer of a vaccine by mid-February.

However, not all of it has been through the final safety checks or been packaged up ready for distribution.

Challenges remain, but even at this early stage it is clear there is growing optimism that the programme is on track.

But with all centres, people will need to wait until they receive an invitation.

On Friday, a third coronavirus vaccine – made by US company Moderna – was approved for use, although supplies are not expected to arrive until spring.

Vaccine programmes are also progressing in the UK’s devolved nations.

All over-50s and everyone who is at greater risk from Covid in Wales will be offered a vaccine by spring, under new plans.

And Scotland’s health secretary has said every aged over 80 or over in the nation will be offered a jab by February, while care workers in Northern Ireland who provide services to ill or elderly patients living at home can now book an appointment to get a Covid-19 vaccine.

Similar lockdown measures are in place across much of Scotland, Wales and Northern Ireland.

Labour leader Sir Keir Starmer has questioned why there are “less restrictions in place” now than there were last March.

In his first speech of the year, he said: “I do think it’s time to hear from the scientists [about] what else could be done and that probably should be done in the next few hours”.

Meanwhile, the United Arab Emirates is being removed from the UK list of travel corridors amid a spike in Covid cases.

And England’s Test and Trace scheme has revised one of its definitions of a “close contact” – the people who need to be reached if they have been near to someone who has tested positive for Covid.

This now refers to anyone who has been within two metres of someone for more than 15 minutes, whether in a single period or cumulatively over the course of one day.

Previously the definition was just a single period of at least 15 minutes.