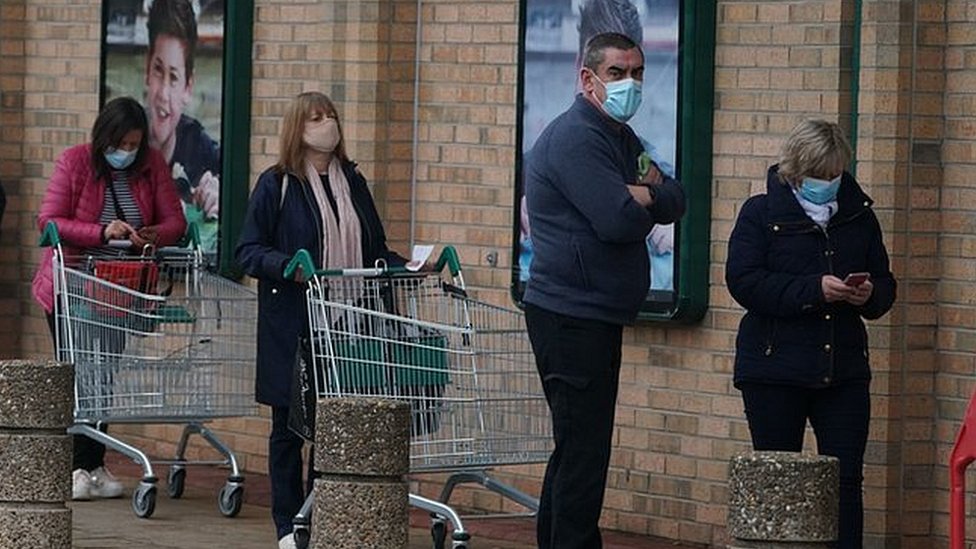 Morrisons will bar customers who refuse to wear face coverings from its shops amid rising coronavirus infections.

From Monday, shoppers who refuse to wear face masks offered by staff will not be allowed inside, unless they are medically exempt.

Sainsbury’s also said it would challenge those not wearing a mask or who were shopping in groups.

The announcements come amid concerns that social distancing measures are not being adhered to in supermarkets.

“Ultimately, the most important thing to do now is to make sure that actually enforcement – and of course the compliance with the rules – when people are going into supermarkets are being adhered to,” Mr Zahawi told Sky News.

“We need to make sure people actually wear masks and follow the one-way system,” he said.

Morrisons said it had “introduced and consistently maintained thorough and robust safety measures in all our stores” since the start of the pandemic.

But it said: “From today we are further strengthening our policy on masks.”

Security guards at the UK’s fourth-biggest supermarket chain will be enforcing the new rules.

Morrisons’ chief executive, David Potts, said: “Those who are offered a face covering and decline to wear one won’t be allowed to shop at Morrisons unless they are medically exempt.

“Our store colleagues are working hard to feed you and your family, please be kind.”

Following Morrisons’ announcement, Sainsbury’s said that it was also putting trained security guards at the front of its stores to challenge shoppers who did not comply.

Chief executive Simon Roberts said: “I’ve spent a lot of time in our stores reviewing the latest situation over the last few days and on behalf of all my colleagues, I am asking our customers to help us keep everyone safe.

“The vast majority of customers are shopping safely, but I have also seen some customers trying to shop without a mask and shopping in larger family groups.

“Please help us to keep all our colleagues and customers safe by always wearing a mask and by shopping alone. Everyone’s care and consideration matters now more than ever.”

Earlier on Monday, Mr Zahawi stopped short of saying that supermarket staff should be responsible for enforcing rules on face masks.

Enforcement of face coverings is the responsibility of the police, not retailers. Wearing face masks in supermarkets and shops is compulsory across the UK.

In England, the police can issue a £200 fine to someone breaking the face covering rules. In Scotland, Northern Ireland and Wales, a £60 fine can be imposed. Repeat offenders face bigger fines.

However, retail industry body the British Retail Consortium said that, workers have faced an increase in incidents of violence and abuse when trying to encourage shoppers to put them on.

Andrew Opie, director of food and sustainability at the British Retail Consortium, added: “Supermarkets continue to follow all safety guidance and customers should be reassured that supermarkets are Covid-secure and safe to visit during lockdown and beyond.

“Customers should play their part too by following in-store signage and being considerate to staff and fellow shoppers.”

Under current lockdown restrictions across England, Scotland, Wales and Northern Ireland, people must only leave home for essential reasons, such as buying food or medicine.

In a bid to contain the spread of coronavirus, supermarkets introduced social distancing measures during the UK’s first nationwide lockdown last March. They included limits on the numbers of customers in the shops at any one time, protective plastic screens at tills and “marshals” to ensure shoppers were maintaining a two-metre distance.

But amid rising numbers of infections, some have expressed concerns about a “lack of visible protections” implemented by supermarkets in recent weeks.

The First Minister of Wales, Mark Drakeford, said on Saturday that he wanted to see stores policed as they were during the first lockdown as people were worried the strict enforcement of rules did not “appear to be there this time”.

“Given the fact the new variant is so much easier to catch… we are looking at supermarkets and other places where people leave their homes, to make sure they are organised in a way that keeps their staff and customers safe,” he said.

Supermarket Waitrose said that it was taking a “cautious approach” to the virus, with marshals checking that customers are wearing face coverings on the door, hand sanitiser stations at its entrances and written communications to shoppers reminding them to maintain their distance.

Tesco said it was limiting the number of customers in store and was also reminding customers to wear masks.

“We have clear signage explaining this, and we have packs of face coverings available for purchase near the front of our stores for any customers who have forgotten them.”

Meanwhile, Asda announced last week that it would extend its marshals’ hours to 08:00 to 20:00 and increase how often baskets and trollies are cleaned.

The union’s general secretary, Paddy Lillis, said that it had received reports that “too many customers are not following necessary safety measures like social distancing, wearing a face covering and only shopping for essential items”.

“It is going to take some time to roll out the vaccine and we cannot afford to be complacent in the meantime, particularly with a new strain sweeping the nation,” Mr Lillis said.

The trade union also suggested that “‘one-in one-out” policies and proper queuing systems should be reintroduced in supermarkets.

It added that these systems should be managed by trained security staff where necessary.