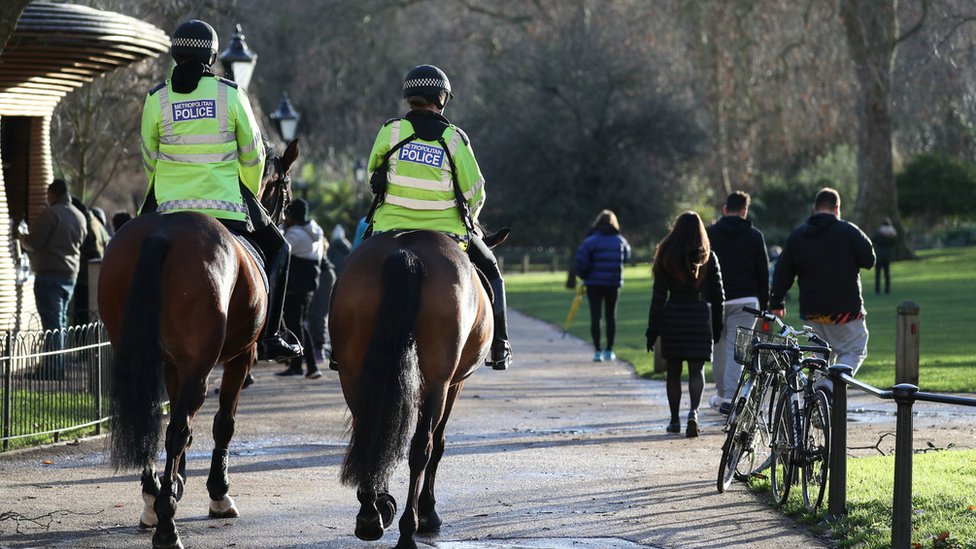 Publishedduration14 minutes agoIt is “preposterous” that anyone could be unaware of the need to follow the coronavirus lockdown rules, the UK’s most senior police officer has said.Metropolitan Police commissioner Dame Cressida Dick wrote in the Times that Londoners have been hosting raves, house parties and gambling events.The policing minister confirmed Dame Cressida’s pledge that rule-breakers…

It is “preposterous” that anyone could be unaware of the need to follow the coronavirus lockdown rules, the UK’s most senior police officer has said.

The policing minister confirmed Dame Cressida’s pledge that rule-breakers are “increasingly likely” to be fined.

Kit Malthouse said people have a “duty” to make this lockdown “the last one”.

“We are urging the small minority of people who aren’t taking this seriously to do so now, and [are illustrating] to them that if they don’t they are much more likely to get fined by the police,” Mr Malthouse told BBC Breakfast.

“These current measures should in theory, if we all stick by them, be enough to drive the numbers down so that we can start to move through the gears of tiers from mid-February,” he added.

Asked if tighter restrictions were on the way – something the health secretary has refused to rule out – Mr Malthouse said ministers were “on tenterhooks” watching the daily figures for Covid deaths, new cases and hospital admissions, as rules continue to be kept under review.

He said the government’s ramped-up efforts to give vulnerable people the coronavirus vaccine should help the UK to “get back to some sort of normality later this year”.

The BBC’s political editor Laura Kuenssberg said there was currently no expectation that a more extensive clampdown of rules was on its way from Westminster.

The Scottish government’s cabinet is due to meet on Tuesday to discuss restrictions.

The latest figures on Monday showed a further 529 people had died within 28 days of a positive test in the UK, while another 46,169 cases were reported.

There are also more than 32,200 people in hospital in the UK with coronavirus, data shows.

In her warning in the Times, Dame Cressida said officers were still finding people breaking the rules, despite clear laws that ban social gatherings.

“Most people are doing the right thing to keep each other safe, but sadly a small minority of people continue to flagrantly ignore the rules, for example by holding house parties, meeting in basements to gamble or breaking into railway arches for unlicensed raves,” she said.

“It is preposterous to me that anyone could be unaware of our duty to do all we can to stop the spread of the virus,” she said, adding that people breaking Covid laws were “increasingly likely to face fines”.

Dame Cressida told Radio 4’s Today programme the move towards greater enforcement was “common sense” rather than a show of “dictatorial policing”.

She also said Prime Minister Boris Johnson’s cycle in east London at the weekend was “not against the law”, but added the “stay local” rules on exercise for England could be made more clear.

Under Scotland’s lockdown restrictions, people must start and finish their exercise in the same place – and to do so, they may travel up to five miles from the boundary of their local authority area. People in Wales should start and finish exercising from their home.

Asked if she would like to see similar detail in England’s guidance, Dame Cressida said: “That is certainly something the government could consider.

“Anything that brings greater clarity, for officers and the public, in general, will be a good thing.”

Police chiefs have been under increasing pressure to enforce the lockdown laws – with a number of news reports about breaches of Covid rules in recent days.

In England and Wales, police have issued 8,000 penalties since November.

Officers have been stopping people and asking them where they have travelled from, while elsewhere people have been discovered using pubs and gyms.

In one case, two women were fined £200 each by Derbyshire Police when they drove five miles for a walk together – but the force has since withdrawn the penalties.

Home Secretary Priti Patel has defended the way police have handled breaches, saying there is a need for “strong enforcement”.

But psychologist Prof Stephen Reicher said evidence suggested 80-90% of people were by and large obeying the rules – except when it came to self-isolation where compliance was lower.

“The problem isn’t people breaking the rules,” said Prof Reicher, who sits on a committee of behavioural scientists that advises the Scientific Advisory Group for Emergencies.

“In many cases it’s either the rules aren’t clear enough, or the rules are too soft, or else people don’t have the support to do what they’re asked to do.”

Speaking on BBC Newsnight’s programme, he said one reason the virus was still spreading was because many people were still going to work. “We are defining all sorts of jobs as essential that aren’t,” he said.

“Stop the coffee,” he told Newsnight. “There are so many things that we are doing, which are allowed in the rules… but I just don’t think they are wise right now.”

Similar lockdown measures are in place across much of Scotland, Wales and Northern Ireland – which are in charge of making their own coronavirus restrictions.

In England, Wales and Northern Ireland fines start at £200 – but are lower in Scotland.

But before issuing fines, police follow a system called “the four Es”. It means they will first engage with someone, explain the law, encourage them to change their behaviour before enforcing the law as a last resort.

On Monday the government published its plan to vaccinate tens of millions of people by the spring. So far 2.3 million people in the UK have had a first Covid vaccine shot.

Police chief constables have been lobbying ministers to prioritise frontline officers to get vaccinated, as the rate of officers self-isolating has risen.

In her article, Dame Cressida said she was “delighted to hear” that this proposal was being “actively discussed”.

Have you been affected by the issues raised in this story? You can share your experience by emailing haveyoursay@bbc.co.uk.