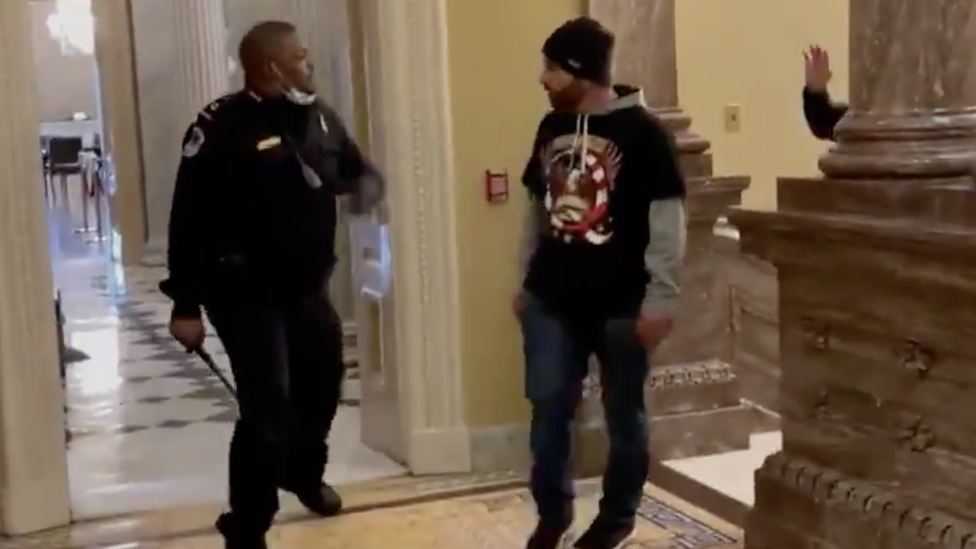 By Holly HonderichBBC News, WashingtonPublishedduration2 hours agoimage copyrightIgor Bobicimage captionOfficer Eugene Goodman is being celebrated for his work last weekA US Capitol police officer is being called a hero for singlehandedly steering a mob away from the Senate chambers during the deadly riots. Footage of the officer, identified as Eugene Goodman, shows him just steps…

A US Capitol police officer is being called a hero for singlehandedly steering a mob away from the Senate chambers during the deadly riots.

Footage of the officer, identified as Eugene Goodman, shows him just steps ahead of rioters as they chase him up a flight of stairs.

Mr Goodman is then seen glancing towards the Senate entrance before luring the men in the opposite direction.

Five people, including a police officer, died as a result of the riots.

Another officer who was on duty during the siege died by suicide this weekend, his family said.

The show of bravery from Mr Goodman, reportedly an Army veteran who spent time in Iraq, comes amid criticism of Capitol Police for apparent security failures during the storming of the Capitol.

On Monday night, the department said two of its officers had been suspended and more than a dozen others were under investigation for suspected inappropriate involvement with the rioters.

“I don’t think there was any type of training that would prepare you for that situation,” Mr Burkhalter said.

In the video shot by Huffington Post reporter Igor Bobic, Mr Goodman, who is black, is antagonised by the group of Trump supporters – who are all white men.

Officer Eugene Goodman stopped a mob of white rioters from entering the chambers of the United States Senate.

At this perilous moment in our nation’s history, he was the one person standing between democracy and the rule of tyrants.

The man at the front of the pack, wearing a QAnon T-shirt, has been identified as Doug Jensen of Iowa. He was later arrested by local police and the FBI for his role in the riots.

Footage shows Mr Jensen leading the mob that chased Mr Goodman up a flight of stairs – just a few feet away from the entrance to the Senate floor. As he is pursued, Mr Goodman shouts “second floor!” into his radio, seemingly alerting other officers of the group approaching the chamber.

After Mr Goodman glances toward the Senate chamber entrance, he shoves Mr Jensen – a move seemingly designed to draw attention on to himself, luring the mob away from the chambers and those hiding inside.

The image of Mr Goodman trailed by a mob – some armed with Confederate flags, others with allusions to the Nazi flag – was extremely disturbing, Mr Burkhalter said.

“Police officer, not a police officer, to see a black man being chased by someone carrying a Confederate flag – there is something wrong with that picture. That should never happen again,” he said.

“It just reeks of everything we need to correct.”

Officer Goodman has been celebrated by several members of Congress, with some calling for Mr Goodman to be awarded the congressional Medal of Honor for his service.

“As Trump’s fascist mob ransacked the US Capitol, this brave USCP officer kept murderous rioters away from the Senate chamber and saved the lives of those inside,” wrote congressman Bill Pascrell on Twitter.

“Last Wednesday, I was inside the Senate chamber when Officer Eugene Goodman led an angry mob away from it at great personal risk. His quick thinking and decisive action that day likely saved lives, and we owe him a debt of gratitude,” wrote Senator Bob Casey on Monday.

Mr Goodman’s standoff with the mob came just minutes before authorities were able to seal the chamber, according to reporting from the Washington Post.

Members of the 2,000-person Capitol police department are tasked with protecting the Capitol building and those inside, it. They are separate from DC police, who patrol the rest of the city.

The chief of the Capitol Police, Steven Sund, resigned last week following criticism over his force’s response to the riots, including a public call from top Democrat Nancy Pelosi for Mr Sund to step down.

Acting US Attorney Michael Sherwin has said that the Justice Department will consider pursuing criminal charges against any Capitol police officers found to be complicit with the rioters.

Officer Howard Liebengood, 51, who was on duty during the riots, died by suicide on Saturday, his family has said. A lawyer for Mr Liebengood’s family called the 15-year department veteran’s death a “devastating loss”.

On Twitter, Republican Senator Mitt Romney said he and his team were “heartbroken” over Mr Liebengood’s death. “Howie was a familiar and cheerful presence, and also a friend to me and my staff,” Mr Romney wrote. “His bravery, kindness, and genuine care for others was deeply felt by all of us who had the privilege of knowing him.”

According to CBS News, the BBC’s US partner, the Capitol police force has responded to a number of incidents of officers threatening to harm themselves after last week’s attacks.

Mr Burkhalter said that responsibility for any security breakdowns rests with the department’s leadership.

When you get to the place where individual police officers, like Officer Goodman, have to make decisions on the deployment of resources, the battle has been lost, he said. “It should never have gotten to that point,” he said.