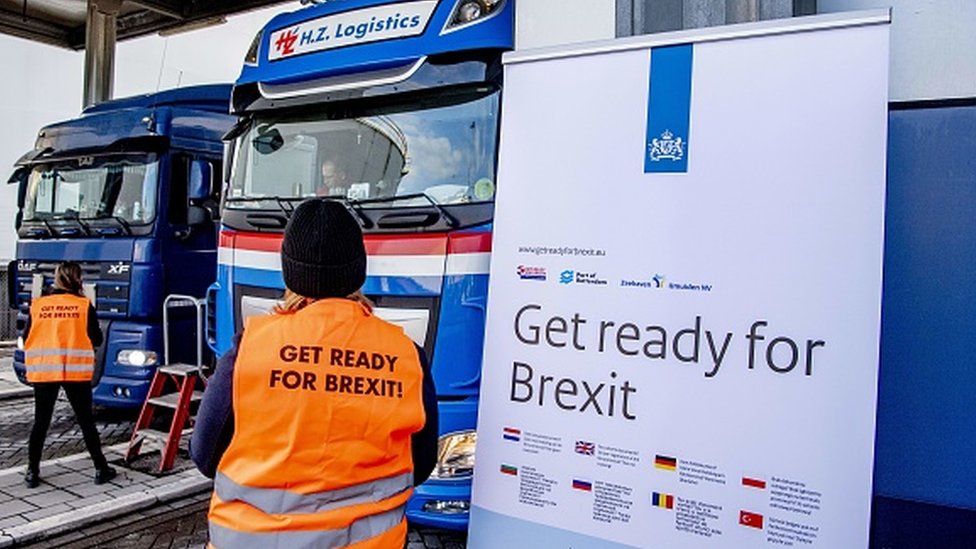 Publishedduration36 minutes agoimage copyrightGetty Imagesimage captionRules governing the import of personal goods from the UK to the EU changed after Brexit formally came into effectA Dutch TV network has filmed border officials confiscating ham sandwiches and other foods from drivers arriving in the Netherlands from the UK, under post-Brexit rules.The officials were shown explaining import…

A Dutch TV network has filmed border officials confiscating ham sandwiches and other foods from drivers arriving in the Netherlands from the UK, under post-Brexit rules.

The officials were shown explaining import regulations imposed since the UK formalised its separation from the EU.

Under EU rules, travellers from outside the bloc are banned from bringing in meat and dairy products.

The rules appeared to bemuse one driver.

“Since Brexit, you are no longer allowed to bring certain foods to Europe, like meat, fruit, vegetables, fish, that kind of stuff,” a Dutch border official told the driver in footage broadcast by TV network NPO 1.

In one scene, a border official asked the driver whether several of his tin-foil wrapped sandwiches had meat in them.

When the driver said they did, the border official said: “Okay, so we take them all.”

Surprised, the driver then asked the officials if he could keep the bread, to which one replied: “No, everything will be confiscated – welcome to the Brexit, sir. I’m sorry.”

The UK officially finished its formal separation from the EU on 31 December, 2020.

From 23:00 GMT on that date, the UK stopped following EU rules, with new arrangements for travel, trade, immigration and security co-operation coming into force.

A trade deal with the EU was agreed on 24 December, and a week later, UK lawmakers voted in favour of the agreement.

The UK’s departure means big changes for business – with the UK and EU forming two separate markets – the end of free movement, and new regulations, including those governing the import of personal goods.

The UK government has issued guidance to commercial drivers travelling to the EU, warning them to “be aware of additional restrictions to personal imports”.

“You cannot bring POAO (products of an animal origin) such as those containing meat or dairy (e.g. a ham and cheese sandwich) into the EU,” the guidance says. “There are exceptions to this rule for certain quantities of powdered infant milk, infant food, special foods, or special processed pet feed.”

On its website, the European Commission says the ban is necessary because such goods “continue to present a real threat to animal health throughout the Union”.

“It is known, for example, that dangerous pathogens that cause animal diseases such as Foot and Mouth Disease and classical swine fever can reside in meat, milk or their products,” the Commission says.

Separately, the Dutch customs agency shared a picture of foodstuffs it had confiscated from motorists in the ferry terminal the Hook of Holland.

“Since 1 January, you can’t just bring more food from the UK,” the agency said. “So prepare yourself if you travel to the Netherlands from the UK and spread the word. This is how we prevent food waste and together ensure that the controls are speeded up.”

The BBC’s economics editor Faisal Islam described the confiscation of ham sandwiches and other foodstuffs at the EU’s borders with the UK as “a standard implication of [the] Brexit deal”.

Dutch customs on Dutch TV taking away drivers’ ham sandwiches on ferry from UK arriving at Hook of Holland, also put seized food shopping (Waitrose?) on facebook – this is a standard implication of Brexit deal, long indicated in prep documents both in UK and EU… pic.twitter.com/zn2m7VovJI