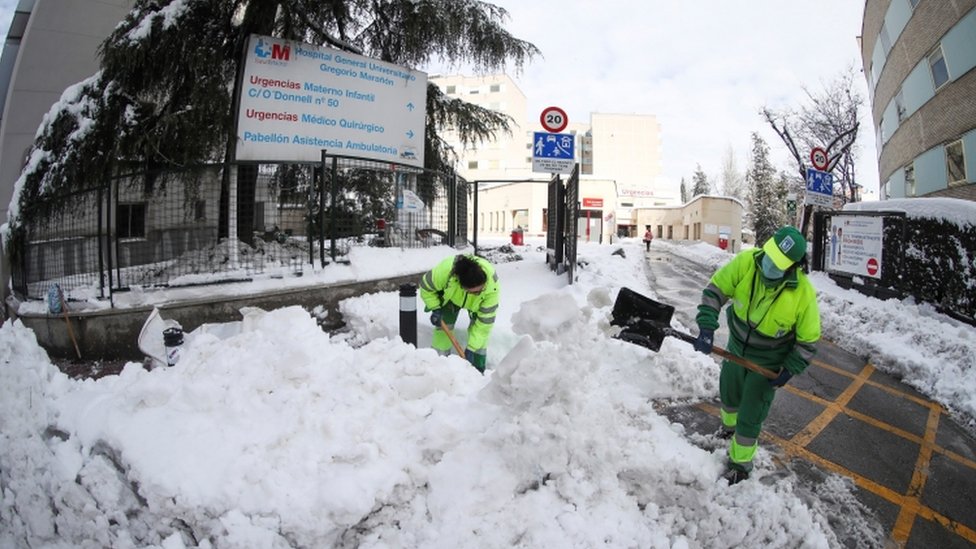 Publishedduration1 hour agoimage copyrightEPAimage captionWorkers in Madrid clear a hospital entrance of snowSpain is in a race against time to clear roads covered by heavy snow, and get Covid vaccines and food supplies to areas affected by Storm Filomena.As much as 50cm (20 inches) of snow fell on Madrid, one of the worst hit areas,…

Spain is in a race against time to clear roads covered by heavy snow, and get Covid vaccines and food supplies to areas affected by Storm Filomena.

As much as 50cm (20 inches) of snow fell on Madrid, one of the worst hit areas, between Friday night and Saturday.

At least four people died and thousands of travellers were left stranded.

Forecasters have warned temperatures could plunge overnight on Sunday, turning the snow to perilous ice.

The Spanish government said it had taken extra steps – including police-escorted convoys – to ensure its expected shipment of some 300,000 coronavirus vaccines can be distributed as planned to regional health authorities on Monday.

“The commitment is to guarantee the supply of health, vaccines and food. Corridors have been opened to deliver the goods,” said transport minister Jose Luis Abalos. He also emphasised that vaccines would “arrive tomorrow, Monday, at their destination as planned”.

Soldiers were out on Sunday clearing some of the 700 major roads that were still impassable in the morning.

Some 500 people across the Madrid region were forced to spend the night in temporary shelter, including sports centres, after they were trapped by the whiteout.

Around 100 shoppers and staff spent two nights at a shopping centre in Majadahonda town north of Madrid. “There are people sleeping on the ground on cardboard,” one restaurant employee told TVE television.

But there were stories of heroism too, including doctors and medical workers who abandoned their cars and walked for hours to get to work. One doctor, Alvaro Sanchez, said on social media he had walked 17km (10 miles) over nearly two hours to get to work, while two nurses, Paco and Monica, said they had walked 22km to their hospital.

They were praised by by Spain’s health minister Salvador Illa, who tweeted: “The commitment that the entire group of health workers is showing is an example of solidarity and dedication.”

“Health staff have been working (hard) for more than a year and this is just a short moment for us, so as citizens, we are trying to help; it is everyone’s responsibility,” said Fernando de la Fuente, 60, who helped clear the entrance to Madrid’s Gregorio Maranon Hospital.

Spaniards in large parts of the country have been warned to take care in the coming days as temperatures could fall to -12C (14F) in some areas until Thursday.