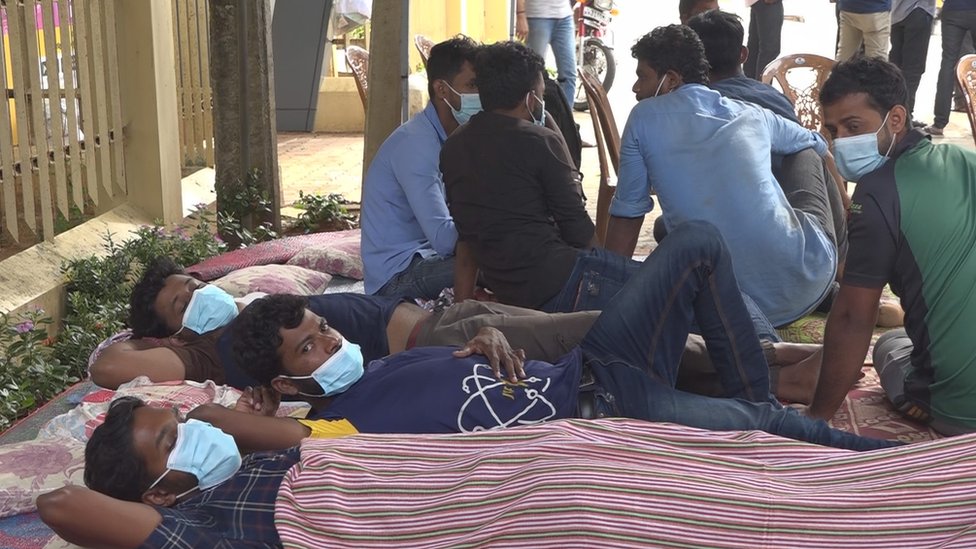 Publishedduration1 hour agoimage copyrightJaffna University Students image captionThe hunger strike was called after the demolition of the monumentA monument in Sri Lanka to commemorate the tens of thousands of Tamils who died in the civil war is to be rebuilt following a hunger strike by students protesting at its demolition.The memorial to Tamils who lost…

A monument in Sri Lanka to commemorate the tens of thousands of Tamils who died in the civil war is to be rebuilt following a hunger strike by students protesting at its demolition.

The memorial to Tamils who lost their lives in Mullivaikkal was demolished at Jaffna University last week.

The University Grants Commission (UGC) had said that the monument was a threat to unity in the country.

But angry students protested and went on hunger strike over its demolition.

Now the monument is to be rebuilt, said the university’s vice-chancellor, who laid a foundation stone on Monday.

Why was the monument demolished?

The monument was built in 2019 in memory of Tamils who lost their lives in the 26-year civil war between government forces and the Tamil Tiger rebel group.

Tens of thousands of minority Tamils died in Mullivaikkal in 2009 during the final stages of the war, which claimed an estimated 100,000 lives.

The monument was knocked down on Friday, with UGC Chairman Sampath Amaratunge saying it was a threat to national unity in Sinhalese majority Sri Lanka. Public Security Minister Sarath Weerasekera said that “no one will and should be allowed to commemorate dead terrorists”.

In response, students started protesting at the university gates and some went on hunger strike, calling for the monument to be restored. There were threats of a general strike in areas where Tamils are a majority.

“This act is an insult not only to the university students but also to the entire Tamil people. It is also an act of denial of a people’s right to memory,” the university’s students’ union said in a statement.

Union leader Pakianathan Uyanthan told BBC Tamil’s Arun Prasad in Jaffna: “We have the right to mourn for our loved ones, who perished in the war. These people sacrificed their lives for the Tamil community.

“We are extremely pained by the demolition of this monument.”

Everyone should respect the feelings & sentiments of our people beyond permissions;

I am deeply saddened & strongly condemn removal of ‘war victims’ memorial at Jaffna University is common to all who lost lives in the final war beyond racial & religious differences. pic.twitter.com/eyDaqbo6tw

One of the strikers fell ill over the weekend, the Tamil Guardian reported.

There was a backlash internationally, too, particularly in the southern Indian state of Tamil Nadu. In Toronto, Tamil Canadians held a car rally to condemn the destruction.

The monument is now to be restored.

The university’s vice chancellor, S Srisatkunarajah, met the hunger strikers early on Monday and gave each of them a cup of porridge to end their protest.

Mr Srisatkunarajah told the BBC that a new “peace monument” would be erected in the same location.

He said he had been “blamed for the demolition”, adding that the monument was removed as it had not been authorised.

A student at the university, Dwakaran, said the announcement of the new monument meant protests had been suspended.

“But if the memorial is not built again we will resume our protest,” the student said.

It is as yet unclear whether formal permission has been granted by the central government or the UGC to build the new monument, but the Tamil Guardian reported the vice chancellor saying the rebuilding was taking place on the government’s orders.

After finishing the ceremony, the Sri Lankan police attempted to make students write down their personal details as they left, the newspaper reported.

When the students refused, the police reportedly said it was due to coronavirus guidelines. All students were allowed to leave after Mr Srisatkunarajah intervened, it said.

The Tamil Tigers controlled around a third of Sri Lanka before they were crushed in 2009.

Sri Lanka’s current President Gotabaya Rajapaksa was the country’s defence secretary then and played a leading role in crushing the rebels.

He is hailed as a hero by many in the Sinhalese population but deeply distrusted by the Tamil community, many of whom accuse the government of denying them the right to remember their war dead.