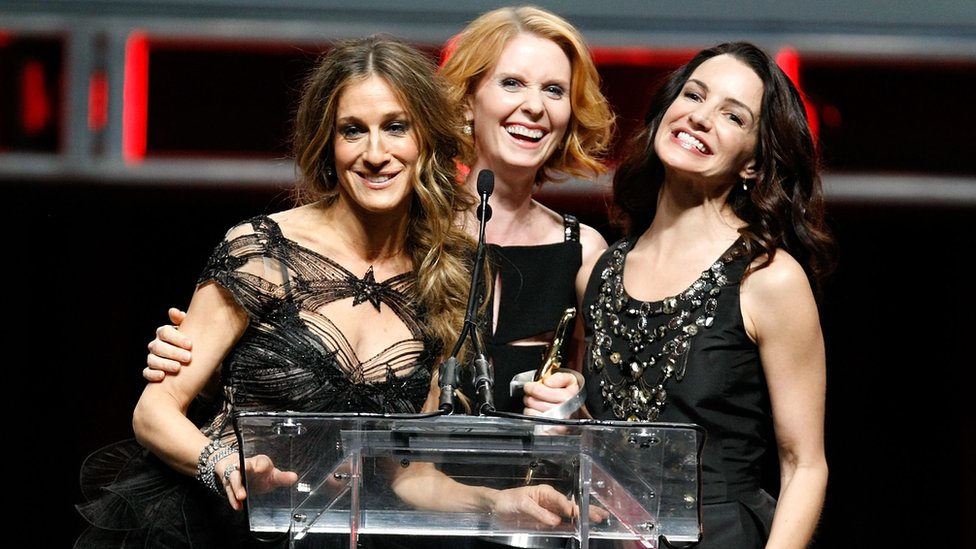 Publishedduration2 hours agoimage copyrightGetty Imagesimage captionBrunch beckons – but Samantha won’t be invitedA Sex and the City revival is heading to the small screen, more than 20 years after the hit series made its debut.The original HBO show followed the lives of four New York women negotiating work and relationships in the late 90s and…

A Sex and the City revival is heading to the small screen, more than 20 years after the hit series made its debut.

The original HBO show followed the lives of four New York women negotiating work and relationships in the late 90s and early 2000s.

But only three of the fab four are returning for the new TV series – Sarah Jessica Parker, Cynthia Nixon and Kristin Davis.

Kim Cattrall, who played the popular character Samantha, will not feature.

The US network did not say why Cattrall wasn’t cast in the revival, titled And Just Like That – a nod to one of the show’s original catchphrases.

However, Cattrall has had a strained relationship with the show in recent years, and in particular with her former co-star Parker.

The new series will comprise of 10 half-hour episodes. Production will begin in late spring.

The trailer for the HBO Max show gives nothing away; It features numerous shots of New York, but none of the characters are seen on screen.

“I grew up with these characters, and I can’t wait to see how their story has evolved in this new chapter, with the honesty, poignancy, humour and the beloved city that has always defined them,” Sarah Aubrey, head of original content at HBO Max, said in a statement.

The original Sex and the City series, created by Darren Star, was based on Candace Bushnell’s 1997 book of the same name.

When it first burst on to our TV screens, Sex and the City was seen as revolutionary – four women talking openly about their love and sex lives, not to mention the sex scenes themselves.

Cosmopolitans and rabbit vibrators were trending before trending was a thing.

While it was praised by many for its liberating female-led content, it also attracted criticism from some quarters who felt Carrie’s ongoing pursuit of Mr Big (Christopher Noth) was not exactly an advert for female independence.

It was also accused of trivialising issues such as sexual harassment and for its lack of diversity, a criticism levelled at many older shows including Friends.

Fashion was a hugely influential part of the series – the tutu worn by Sarah Jessica Parker in the opening credits, teamed with a fur coat and heels, was described as “an ensemble rich in cultural resonance”.

And Manolo Blahnik could never have dreamed of attracting so much publicity for his designer footwear.

It was a ratings smash, with the hotly anticipated finale in 2004 drawing an audience of 10.6 million viewers in the US.

In the UK, the final episode was watched by 4.1m on Channel 4.

The series was predictably most popular in the 18-34 age group.

Many SATC fans will be disappointed that larger-than-life favourite Samantha Jones – played by Kim Cattrall – will not be returning for the sequel series.

Samantha was Sex and the City’s most outlandish character and arguably, the star of the show.

While Miranda was juggling a career and motherhood, Charlotte was focused on marriage and motherhood and Carrie poured her neuroses into her New York Times column, Samantha was the character perhaps harder to relate to but someone we all wanted to be (at least a little).

She was fiercely independent and while caring for her friends, she always put her own needs before men.

But news Cattrall won’t reprise the role in And Just Like That comes as no surprise after years of feud rumours which were later confirmed by the US actress.

In 2017, Cattrall told Piers Morgan she had “never been friends” with her co-stars.

She said there was a “toxic relationship” and ruled out appearing in a third Sex and the City movie, denying that her decision was down to pay or “diva” demands.

Cattrall commented that former co-star Parker “could have been nicer” about the situation.

A different actress could play Samantha in the future, she suggested.

“I played it past the finish line and then some and I loved it and another actress should play it,” she said. “Maybe they could make it an African-American Samantha Jones or a Hispanic Samantha Jones, or bring in another character.”

She later criticised Parker for being “cruel” after she sent condolences following the death of Cattrall’s brother.

In an interview with People magazine shortly afterwards, SJP acknowledged Cattrall “said things that were really hurtful about me”.

Parker said: “So there was no fight; it was completely fabricated, because I actually never responded.”