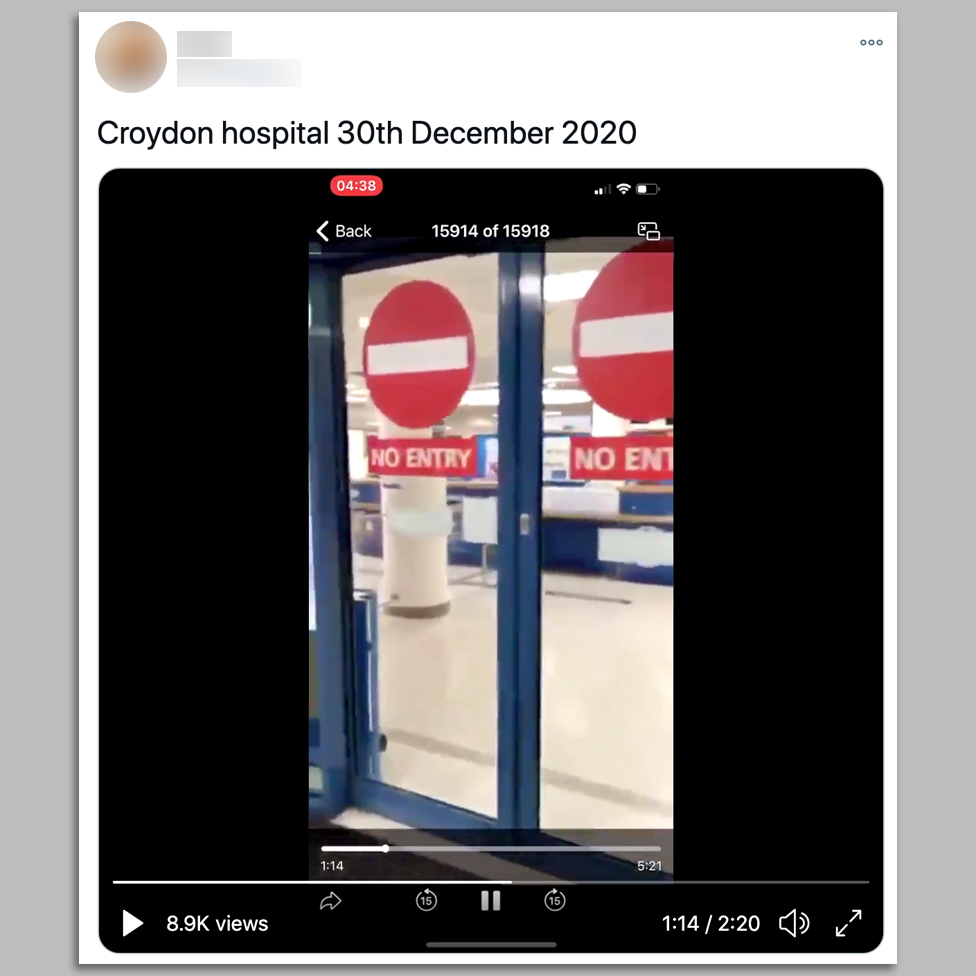 By Christopher Giles, Jack Goodman and Olga RobinsonBBC Reality Check team Publishedduration2 hours agoimage captionThe NHS says “this sort of misinformation undermines the hard work of everyone working long hours”Multiple videos posted online claim to show empty hospitals in the UK as evidence that the coronavirus pandemic has been exaggerated. It has provoked a strong…

Multiple videos posted online claim to show empty hospitals in the UK as evidence that the coronavirus pandemic has been exaggerated.

It has provoked a strong reaction from healthcare officials, who have encouraged the public to heed government advice as coronavirus infections surge – putting pressure on the NHS.

Responding to a question about hospital beds being empty, NHS England chief executive Sir Simon Stevens said: “When people say that, that is a lie.”

What do the videos show?

They’re mostly filmed by individuals walking through quiet hospital corridors and are being posted in Facebook groups and on the Twitter feeds of coronavirus sceptics and anti-lockdown activists.

There have been videos taken of dozens of locations and some have been viewed hundreds of thousands of times.

The number of Covid patients has increased significantly in recent weeks and there are serious concerns about the NHS’s ability to cope with the surge.

However, because of the way healthcare trusts have reorganised hospitals, often separating Covid patients from others, and cancelling non-urgent care to free up capacity, some parts of hospital buildings will currently look empty. That doesn’t mean hospitals aren’t busy.

We’ve examined videos from two different locations and sought responses to them from the hospitals.

A video posted on social media purports to show an empty Croydon University Hospital, with a commentary claiming that the government is exaggerating the scale of the pandemic.

The video, posted in three parts, has been viewed thousands of times and shared across multiple anonymous social media accounts. It has prompted other users to make comments below the post that their local hospitals are empty too.

Croydon University Hospital is a large centre treating patients on a 24-hour basis.

In a statement in response to the video posts, the hospital trust said: “Contrary to videos circulating online claiming to show our hospital is empty, our services remain extremely busy.”

The video starts with the camera entering the main reception room through signs saying “NO ENTRY”.

The main reception area has a closed coffee shop and the person filming says: “I’ve never seen this place so empty.”

Responding to the footage, a spokesperson for Croydon Health Services told us: “We have a one-way system in the main entrance to help with social distancing when entering or leaving the hospital. The video shows this person arriving via the exit.

“The video was also filmed overnight, when the coffee shops would be closed and when we would expect to see our corridors less busy,” they added.

The video shows empty corridors. But there’s a good reason the corridors are empty. “We provide this care in our wards and in other clinical areas – not corridors or waiting rooms,” said the hospital spokesperson.

The man then walks around the outside of the A&E waiting room. “Urgent treatment – empty. Look at this place,” says the individual, filming the outside of a waiting room which looks fairly full of people sitting socially distanced.

“Regarding the A&E waiting area, the video shows only the entrance to the department,” said the hospital.

“Patients brought in by ambulance, or those in a serious condition or requiring admission to hospital, are unlikely to be waiting in this area.

“Perpetuating myths and rumours only undermines their [NHS staff] hard work. It also risks the spread of misinformation, which could lead people to risk their own health and the health of their loved ones,” said the hospital official.

Another set of videos, posted on Twitter but without commentary, shows an individual walking down apparently empty corridors of the Princess Royal Hospital in Bromley on – it’s claimed – New Year’s Day.

The NHS says the footage “misrepresents what is really happening”.

Four clips have been uploaded of someone passing down a corridor with a sign for the critical care unit, with a twitter thread referring to “spare beds” and the “closed bereavement unit” along with the hashtag “film your hospital”.

The videos have been watched tens of thousands of times, but reveal very little about how this particular hospital is dealing with the pandemic.

In response, the King’s College NHS Trust say the parts of the hospital dealing with the pandemic are extremely busy: “This corridor is not representative of what is happening in wards across the hospital, which have seen a more than ten-fold increase in Covid admissions in the space of a month.”

The bereavement suite, briefly shown in one of the videos, is apparently closed. But according to the Princess Royal University hospital website, it shuts at 4pm and on bank holidays.

In a further clip, the person filming the video appears to enter an urgent care centre and on Twitter questions whether it is “overrun”. The room looks relatively full of people.

One particular Facebook group in the UK is dedicated to sharing pictures and videos of empty hospitals, and has more than 13,000 members.

It appears the administrators of this group are linked to another Facebook group promoting a baseless conspiracy about the global Covid pandemic, known as the ‘Great Reset’ theory.

In March last year, several viral videos purported to show empty hospitals across the United States, with the hashtag ‘film your hospital’ being tweeted by thousands of accounts.

This sparked a trend that has been repeated in other countries.

These videos in the UK are the latest example of people taking direct action to spread misinformation about the pandemic.

The year 2020 ended with a group of people standing outside St Thomas’ Hospital in London shouting that the pandemic is a “hoax”.

One doctor witnessed the gathering and posted on Twitter that he was “disgusted but mostly heartbroken.”

I’m disgusted but mostly heartbroken. I wish people could see the amount of #COVID19 and death in hospitals, and the sacrifices that healthcare workers make. This week alone has been so tough.
Their ignorance is hurting others.
I really wish people would keep themselves safe.