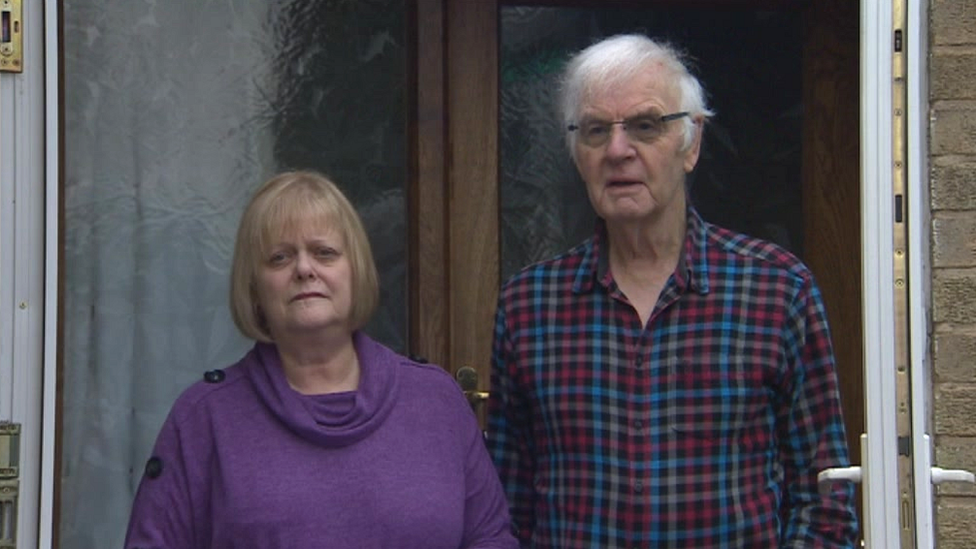 Publishedduration11 minutes agoimage captionKay and Kenneth Hayward said they felt the journey was too unsafePeople waiting to receive the Covid-19 vaccine say they are confused by NHS letters inviting them to travel to centres miles away from their homes.The first 130,000 letters have been sent to people aged 80 or older who live between a…

People waiting to receive the Covid-19 vaccine say they are confused by NHS letters inviting them to travel to centres miles away from their homes.

The first 130,000 letters have been sent to people aged 80 or older who live between a 30 to 45-minute drive from one of seven new regional centres.

But patients, many of whom are shielding, questioned why they had to travel so far in a pandemic.

Local jabs are available to people if they wait, the NHS said.

People will not miss out on their vaccination if they do not use the letters to make an appointment at one of the centres, the NHS said.

Two Labour MPs tweeted about their concerns about the letters being delayed in getting out to people due to coronavirus affecting Royal Mail staff.

Mary McGarry from Leamington Spa in Warwickshire told BBC News that her letter points to an NHS online booking page which suggests she would have to take her husband, who has cancer and a lung disease, 20 miles to Birmingham.

“If we can’t get somebody to take us, we’d have to go on the train but we’re shielding because my husband’s got poor health…. we want to know why we’ve got to travel that far?”

Kay Hayward, from Whitwick in Leicestershire, said she went online to book an appointment for her 85-year-old husband Kenneth and was offered five different places including Widnes in Cheshire and Stevenage in Hertfordshire.

“I thought they must be joking… we talked about it and we thought it was actually safer to stay here and for him not not have it.

“But we were worried if we turned this down, we’d be off the list.. the letter doesn’t say anything about having the vaccines anywhere else locally.”

Andrea Eaton, from Coventry, said she was so angry that her 81-year-old mother, who has heart problems and leukaemia, was offered Birmingham for her appointment that she attempted to ring Downing Street on Saturday night to complain.

She said she reached the press office and said: “I want you to give Boris a message please that he has lied to the British public.

“He has told them they never need to go more than 10 miles… they were really rude and just put the phone down on me.”

A spokesperson from Number 10 told BBC News that they did not wish to comment, but wanted to remind the public to use the government website to write to the prime minister or contact their constituency MP.

Councillor Shaun Davies, the Labour leader at Telford and Wrekin Council in Shropshire, said he had been contacted by dozens of people who have found the letters misleading, thinking this is their only chance to get the vaccine.

He said he had spoken to Trafford Council and was aware of people in Shropshire being sent to Manchester and residents there being directed to Birmingham to get their jabs.

“For many people they have been told consistently to wait for the NHS to contact you in order to get a vaccine and that’s what they’ve had for the first time as a piece of communication.

“This is really, really concerning for people in their 80s or 90s because of the importance of getting the vaccine.”

The letters are not “going to the heart” of the public health message which is staying home and staying local, he said.

Dr Sarah Raistrick, from Coventry and Rugby Clinical Commission group (CCG), said people did not have to travel to the centres but admitted the letter did not make that clear.

“You can wait and be contacted by your local GP service and have it locally if you’d prefer.

“If you sit tight, you will be contacted and I’m hopeful that if you’re 80 or over, by the end of this month you will have had your vaccination whether that is locally or whether you have chosen to travel,” she said.

Work will be done with the NHS locally and nationally to make that message clearer, she added.

The seven centres were chosen to give a geographical spread covering as many people as possible and are capable of delivering thousands of jabs per week, NHS England has said.

BBC News has contacted NHS England for a response.