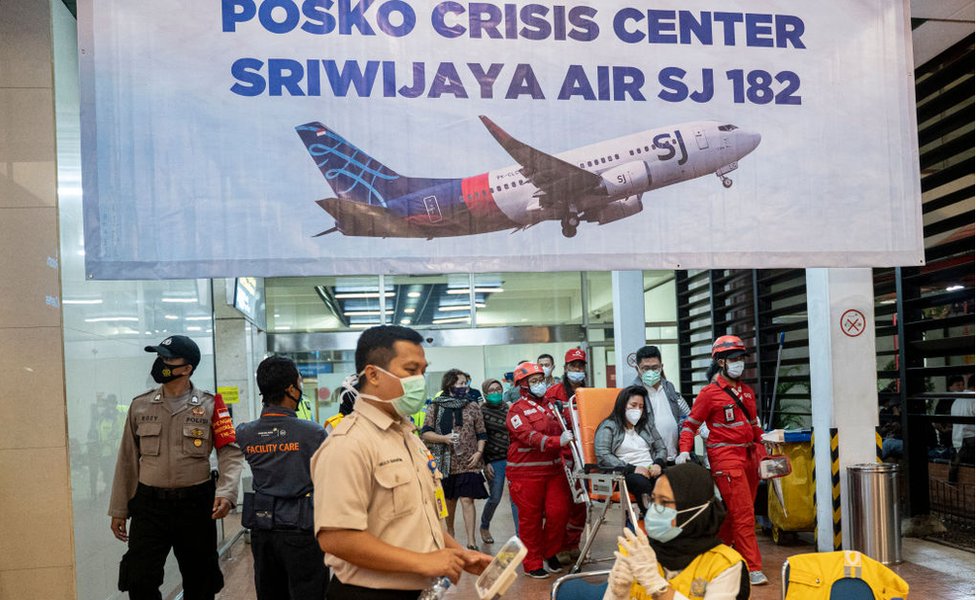 Publishedduration1 hour agoimage copyrightGetty Imagesimage captionA crisis centre for relatives has been set up at the airport in JakartaRelatives of the passengers and crew on board the ill-fated Sriwijaya Air Boeing 737 are facing an agonising wait as a recovery operation gets under way.Sixty-two people were on board the passenger plane which plunged into the…

Relatives of the passengers and crew on board the ill-fated Sriwijaya Air Boeing 737 are facing an agonising wait as a recovery operation gets under way.

Sixty-two people were on board the passenger plane which plunged into the sea just minutes after taking off from Jakarta on Saturday.

There appears to be no hope of finding survivors.

Although no-one on board has been formally identified, information is emerging from family and friends.

BBC Indonesia’s Dwiki Marta and Widianingsih have helped to collate the following accounts.

“We’re in grief, still praying for the best,” said Ferza Mahardhika, whose uncle was the pilot of the Sriwijaya SJ182 flight.

Captain Afwan, 54, left home quickly on the day of the doomed flight, his nephew told BBC Indonesia, complaining that “his shirt hadn’t been ironed, when usually he is really neat”.

The captain apologised to his three children for having to leave them again.

Captain Afwan, who like many Indonesians goes by one name, started his flying career in the air force before becoming a commercial pilot in 1987.

His family and colleagues say he was devoted Muslim, eager to help people in his neighbourhood in the West Java town of Bogor, and at work.

His profile picture on social media is a cartoon of Superman praying, with the words “it doesn’t matter how high you fly, you will never reach heaven if you don’t pray”.

“He was a very good man. He often gave advice, wise advice. He was a prominent figure in his neighbourhood and was well-known for his kindness,” said Ferza Mahardhika.

“I’m devastated and can’t believe that this is happening. Please pray for uncle and our family,” he added.

Afrida told BBC Indonesia she was still holding out hope that her 29-year-old son Angga Fernanda Afrion, who was on the flight, might still be alive.

“Family members who are in Jakarta are searching for information. I want to go, too, but with the pandemic it’s difficult to travel,” said Afrida, who lives in West Sumatra.

Just a week ago Angga – a seaman – had become a father, his wife giving birth to their first child, a boy named Alvano Faeyza Alingga. His mother said that becoming a father had motived him to work harder to provide the best for his son.

Angga worked on large cargo boats. His mother says he called her late on Friday saying that he had to fly to Pontianak at the last minute because “his ship was damaged and his boss had told him he needed to come”.

He often had to travel for work across the Indonesian archipelago but preferred to travel by boat, rarely flying.

Afrida said her son was “a strong-willed child but was very obedient. He was a kind polite person and could get on well with anyone.”

“If he is gone what I want is to be able to bring him home and bury him properly,” she said quietly, while holding a framed photo of Angga in his uniform.

Also on board were newly married couple Ihsan Adhlan Hakim and Putri Wahyuni. Ihsan’s younger brother, Arwin Amru Hakim, told news website Kompas that his brother had called from Soekarno Hatta Airport to let the family know their flight had been delayed, due to bad weather.

The couple were travelling to Kalimantan to hold a wedding party for Ihsan’s extended family who live in Pontianak.

“The plan was that next Saturday the event would take place,” said Arwin. But now, he says, the family are praying together.

Indah Halima Putri and Muhammad Rizky Wahyudi with their baby

Yusrilanita fainted when told the news about the Sriwijaya Air SJ182 aircraft that was carrying her daughter Indah Halima Putri, son-in-law Muhammad Rizky Wahyudi and their baby.

Indah had returned to her family home in Java to give birth, and was now going home with her husband to their home in Pontianak.

Before the plane took off, according to local media, Indah send a photo of the plane’s wing via a WhatsApp message saying there was heavy rain and asking for the family’s prayers.

Meanwhile, authorities have set up a special centre at Pontianak Supadio Airport in Indonesia to take DNA samples from close family of those on board to help with identification.

“We have deployed 51 personnel to be on standby at the post to work with personnel from the Disaster Victim Identification team to collect the samples,” said Assistant Senior Commissioner of Police Yani Permana.

The process is expected to take at least two more days as some families have to travel to reach the centre.