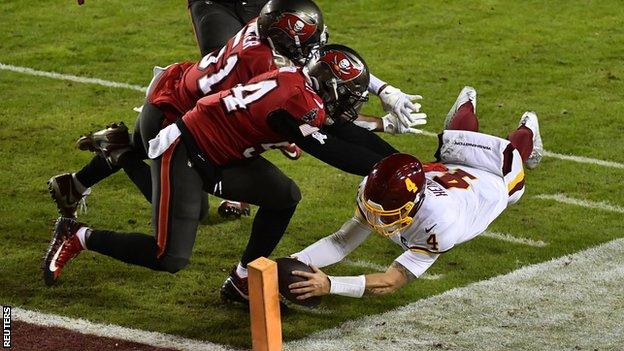 Washington quarterback Taylor Heinicke was impressive in defeat, despite previously being cut from four other NFL teams. His last team was the St Louis Battlehawks of the XFL – where he couldn’t get a gameFollow live text commentary from 18:00 GMT on Sunday plus watch video clips and highlights on the BBC Sport website and…

Tom Brady and the Tampa Bay Buccaneers held off a spirited display by Washington quarterback Taylor Heinicke to advance to the Divisional Round of the NFL play-offs with a 31-23 victory.

Brady joined the Bucs this season after ending his long association with the New England Patriots, which delivered him a record six Super Bowl rings, and has responded by leading Tampa Bay to the franchise’s first play-off win since winning the Super Bowl in the 2002 season.

The 43-year-old Brady, who threw for 381 yards and two touchdowns, was made to sweat before securing victory in this NFC wildcard contest, as Heinicke – starting ahead of the injured Alex Smith – kept the Bucs honest by throwing for 306 yards with a touchdown as well as diving for a superb score after a scampering run.

There was still time for a late Washington rally as Heinicke produced a superb march downfield before finding Steven Sims in the endzone, but Tampa Bay held on, kicking another field goal to add late gloss.

It was nevertheless fairytale stuff for 27-year-old Heinicke, who was finishing a degree in engineering when he was signed by Washington to their practice squad on 8 December, and only made the active roster on 19 December.

But it it was not enough to deny Brady a 31st career play-off triumph and a meeting with either the Los Angeles Rams or the New Orleans Saints in the next round.

The game was the final part of a triple-header of wildcard contests on Saturday, which also brought wins for the Rams and the Buffalo Bills.

The Rams upset the Seattle Seahawks, the third seed in the NFC Conference, by claiming a 30-20 win despite an early quarterback change.

Back-up John Wolford again started after making his NFL debut in the final game of the regular season but was injured on the Rams’ second drive.

In came Jared Goff, just two weeks after suffering a broken thumb which required surgery, and the first-choice QB, who led the Rams to Super Bowl 53, steered them to a 20-10 lead by the half.

Cam Akers rushed for 131 yards and a touchdown, while Darious Williams returned an interception for a score, before Goff threw a 15-yard TD pass to Robert Woods to put LA 30-13 up with 4:46 remaining.

Seattle’s Russell Wilson made 11 of 27 passes and was sacked five time as the Seahawks suffered their first play-off loss at home since 2004.

“I have no place in my brain for this outcome,” said Seahawks coach Pete Carroll. “The pressure was hard, the coverage was good – he (Wilson) was up against it all day.”

The Bills enjoyed their first play-off win since 1995 as they hung on for a 27-24 victory over the Indianapolis Colts.

The Bills recovered from 10-7 down to take a 24-10 lead early in the fourth quarter after a 35-yard touchdown by Stefon Diggs, who finished with six passes for 128 yards.

And despite a Colts fightback, quarterback Philip Rivers was unable to get them within field-goal range on the final drive of what could be the 39-year-old’s last NFL game.

Bills quarterback Josh Allen passed for 324 yards and two touchdowns while running for another as Buffalo, who will play at home in next week’s divisional round, claimed their seventh straight win.

“It doesn’t matter how it looks,” said Allen. “It’s the play-offs, it’s win or go home, and we got it done. Now we’ve got to turn our focus to whoever we’ve got next week.

“It’s been a long time since Bills Mafia (the Bills fans) has been able to celebrate like this, but it’s one game. I’m just happy for a chance to play next week.”