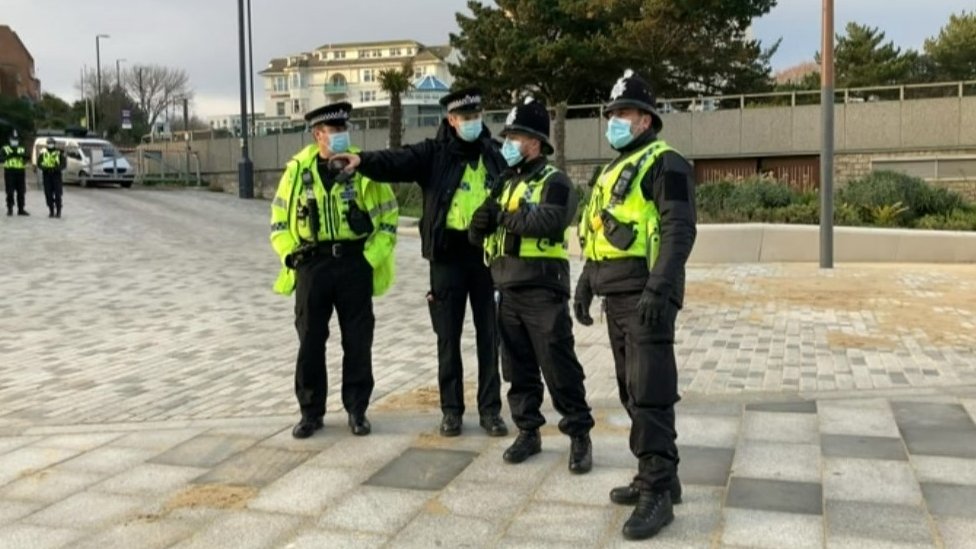 Publishedduration44 minutes agoimage captionDorset Police said officers dispersed dozens of demonstrators from the town centre as they attempted to marchA video shared online apparently showing a woman being arrested in breach of Covid rules for sitting on a bench was “stage-managed”, police said.Dorset Police believe the video was planned and recorded by anti-lockdown protestors during…

A video shared online apparently showing a woman being arrested in breach of Covid rules for sitting on a bench was “stage-managed”, police said.

Dorset Police believe the video was planned and recorded by anti-lockdown protestors during a demonstration in Bournemouth on Saturday.

Three people were arrested for failing to give their details and given fixed penalty notices.

The BBC has asked one of the protestors who posted the video to comment.

The force said two of those held were later de-arrested when they confirmed their details in police custody and a third was released when his details were verified – all three were issued fines.

Assistant Chief Constable Mark Callaghan said: “We believe this video was planned, stage-managed and recorded by members of the protest group who turned up in multiple areas, several of whom refused to engage or provide their details.

“If people refuse to give their details in such circumstances then it leaves officers with little option, but to arrest until the details are established. Our officers would only arrest as a last resort.

“It was clear that the group was deliberately organising their activities, walking around in twos and then trying to come together in a ‘flash mob’-style approach, as they have done previously. This activity went on for a couple of hours.”

The force’s chief constable James Vaughan earlier said: “I condemn the actions of these selfish individuals who knowingly flouted the lockdown restrictions.”

The force said there were “repeated attempts” to engage with the organisers to stop the planned protest and found a number of the protestors had “travelled considerably” from out of the Dorset area.

Mr Vaughan added: “Our county is gripped with infections and yet these irresponsible individuals have ignored what is being asked of them and have left their homes to protest. Shame on them.”

Sam Crowe, director of public health for Dorset, said its hospital services were “close to being overwhelmed”.

Mr Crowe said: “Infection rates locally have been doubling in less than a week. If this carries on, our hospitals will not be able to cope with caring for those needing life-saving treatment. Stay at home means exactly that.”