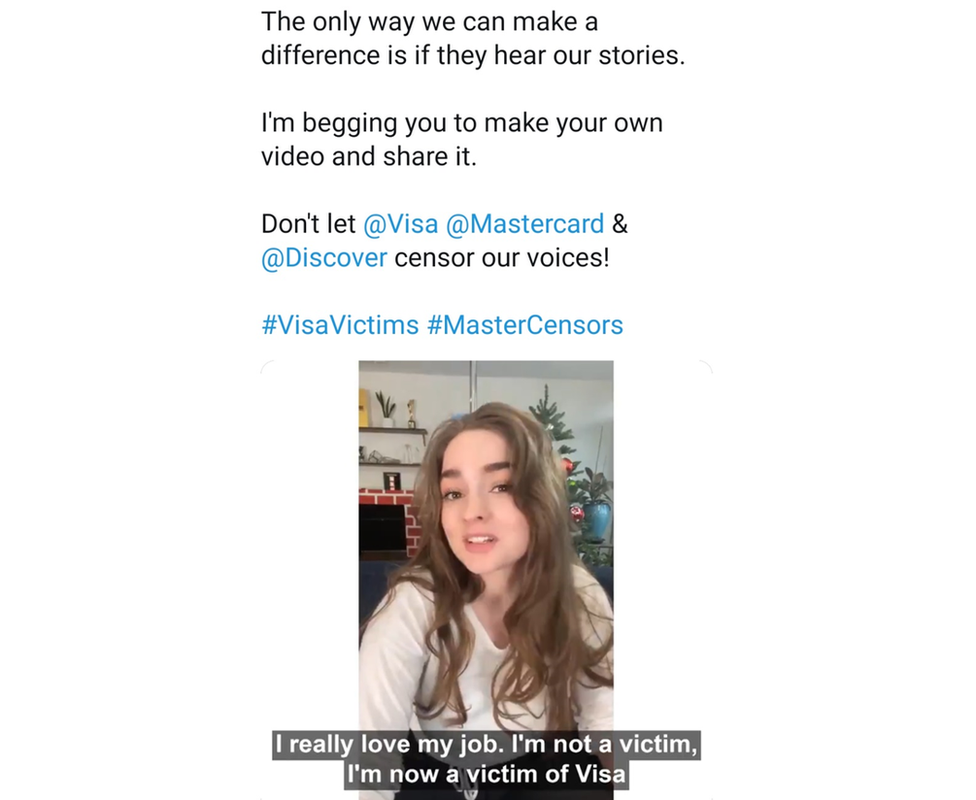 However, sex workers are saying that the sudden decision has put their livelihoods at risk, and will not solve the problem of illegal content.

Adult performer Mary Moody has started a campaign to raise awareness on the consequence for performers like her.

“I personally stand to lose thousands each month, but I want to spotlight the many workers who will be losing the income they rely on for survival, especially during the pandemic,” she said.

The article prompted card companies to carry out their own investigations and eventually block payments to the site.

Adult performers and producers had been campaigning for these features for years.

The ability for any user to freely download and upload content had made it possible for pirated, stolen and illegal videos to proliferate, while also making sales of original content more difficult.

But the credit card suspension also makes it almost impossible for performers to receive payments or tips on the website.

“It comes at the top of Google searches for pretty much any industry worker.”

Many performers also use other adult platforms and subscription sites, such as OnlyFans.

But Ms Moody said making the jump was more difficult than it might appear to outsiders.

The sudden and unexpected change has been an additional source of stress for performers, who have often spent months or years building up a following.

“We didn’t have time to prepare for it or to set money aside to pay rent the next month or anything like that,” said Ms Vega.

Digital rights group Electronic Frontier Foundation has also complained about the firms exercising “censorship powers”. It said this was similar to how they had earlier tried to cut off payments to “countless sex workers” and Wikileaks, among others.

“Any website or individual can find itself running foul of Visa and Mastercard’s moral sensibilities,” it blogged in December.

“I’m worrying that the same thing will happen to other platforms,” says June Liu, the third-highest ranked model on Pornhub’s section for independent creators.

But in a recent interview with a New York Times podcast, Mastercard’s chief executive insisted that the decision had nothing to do with morals and was based solely on legal concerns.

And, in a statement on Twitter, Visa said: “Given the allegations of illegal activity, Visa is suspending Pornhub’s acceptance privileges pending the completion of our ongoing investigation.

“At Visa, we are vigilant in our efforts to stamp out illegal activity on our network, and we encourage our financial institution partners to regularly review their merchants’ compliance of our standards on this and other platforms.”

Sex workers argue that the freeze won’t affect abusers and criminals who uploaded illegal content, as only certified creators could sell videos.

“Why should Visa or Mastercard decide that a person can’t spend their money on something that’s completely legal?” said adult performer and sex workers’ rights activist Ginger Banks.

Sex workers often feel discriminated against by financial institutions, because working in the sex industry makes it difficult to access services and incurs higher fees.

“The credit card block is the result of the campaigning by religiously-motivated groups like Exodus Cry,” claimed adult performer Valentina Nappi.

“The real target of these groups is not to help victims or fight illegal content on the internet, but to ban all forms of adult material.”

Sex workers and adult sites argue that the issue with illegal and abusive material affects all platforms allowing users to upload content, including social media.