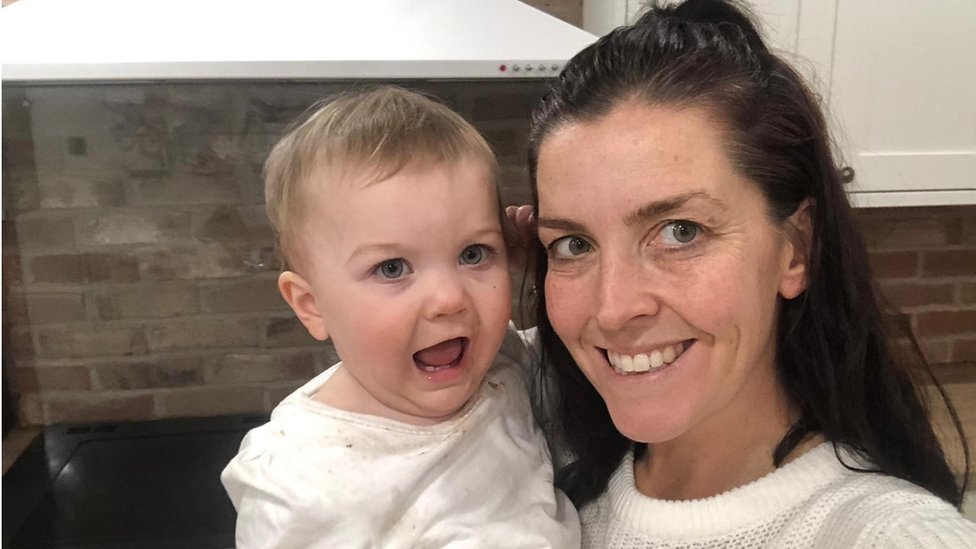 By Rachael LazaroBBC NewsPublishedduration59 minutes agoimage copyrightRachael Powell image captionRachael Powell is “angry and upset” about her daughter Emmeline missing out during lockdownWhen Rachael Powell’s one-year-old daughter met her grandparents for the first time after months of Covid-induced separation, she “absolutely screamed the place down” as she “didn’t know who they were”.The 39-year-old was on…

When Rachael Powell’s one-year-old daughter met her grandparents for the first time after months of Covid-induced separation, she “absolutely screamed the place down” as she “didn’t know who they were”.

The 39-year-old was on maternity leave with Emmeline when the first national lockdown was announced in March and she had to shield.

“I was really looking forward to going to coffee shops, meeting other mums and going to baby classes and then everything stopped,” she says.

“I felt guilty that she didn’t get any of that and have that interaction.”

The mum from Monton in Greater Manchester is far from alone in having those concerns.

Many parents believe their babies’ development has been hit by the impact of coronavirus.

Baby classes have been cancelled, restarted and cancelled again, while meet-ups with fellow parents now feel like a luxury enjoyed only in the distant past.

Rachael says it left her feeling “cheated” out of her maternity leave and upset that even simple things like visits from Emmeline’s grandparents had become fraught.

“She just screamed – absolutely screamed the place down,” she says.

“I couldn’t leave her in the same room as them. She didn’t know who they were.”

Rachael says Emmeline had managed to have some interactions with other babies when classes started up again with new Covid-secure guidelines, but it was “just not the same” as when she took her baby’s seven-year-old brother Charlie to classes when he was her age.

“It was good at first, because she got to do songs and activities, but as a mum, you didn’t get anything from it as I was sat so far away from other mums.

“And, as Emmeline was getting bigger and wanting to get off the mat and see other children, the whole thing became about keeping her on the mat.”

Liz Osler, who runs Little Groovers music classes in Greater Manchester, agrees that Covid-secure sessions are “the opposite of what the groups are about really”.

“Children are usually encouraged to be sociable and come up and select an instrument, but now they’re given instruments in a bag and you’ve got to keep the bag on your mat.”

However, she believes it is still worthwhile hosting the sessions, as they give parents somewhere to go during a difficult time.

She says everyone was “so happy to be able to do something normal, even though it’s not normal”, but reorganising her business had meant “massive financial outlay” on items such as headsets and loud speakers and on booking larger venues to allow for social distancing.

She says running the classes also means she is “on pins all the time”.

“Before Covid, I was in the moment… and now the music is the last thing on my mind [as] all I’m doing is thinking about everyone’s safety.

“I can’t wait for when children can be sociable with each other and we can blow bubbles and just enjoy the music together.

“You just want to fast-forward to when it’s all over.”

Delimar Recio, who is originally from Venezuela and lives in Walkden, Greater Manchester says that pressure of having to second guess her one-year-old daughter Sabrina’s interactions is hard.

The 31-year-old says while it was “frustrating” to have a burgeoning support network taken away when the first lockdown announced, the easing of restrictions was also stressful because of Sabrina’s natural curiosity.

“She wanted to reach out and touch the other babies and crawl towards them,” she says.

“I had to hold her back and she was crying.

“I thought ‘what is the point if she was going to get upset all the time?’.”

Education consultant and child psychologist Dr Paul Kelly says classes and meet-ups are vital to a baby’s development and Covid was having a “massive impact”.

“We are social creatures, social beings – it is pre-programmed in our brains,” he says.

“When children’s brains are stimulated, they grow.”

Dr Kelly says there is also an impact on parents, who are missing out on “mutual support”, adding: “An informal get-together is massive in terms of benefitting both parent and child.”

For him, people should “grab what they can, when they can” during these uncertain times and focus on “how you can enhance [your baby’s] development… rather than spending time thinking about how your child might be behind”.

Both mums say they have been surprised by what their daughters now take in their strides.

Rachael says Emmeline “just clung on to me” when she first returned to nursery and was “quite teary”, but, “after a week or two”, stopped crying and settled in, while Delimar says Sabrina is now used to video-calling and is slowly getting used to meeting more people.

“After the first lockdown, she’d cry if she saw a new person,” she says.