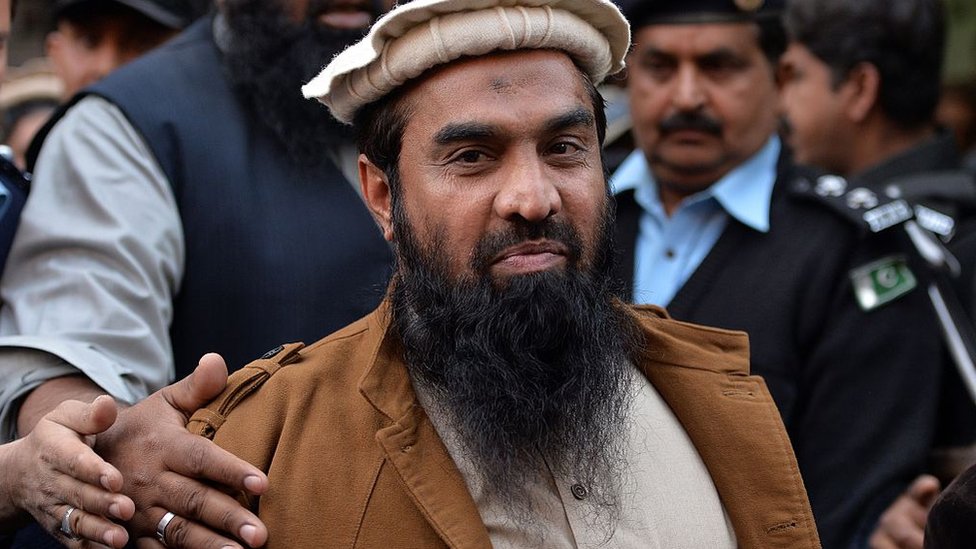 Publishedduration6 hours agoimage copyrightGetty ImagesA Pakistan court has sentenced Zakiur Rehman Lakhvi, a senior leader of the militant group Lashkar-e-Taiba, to five years in prison for terror financing.Lakhvi has been accused by India and the US of orchestrating the 2008 Mumbai terror attacks, in which at least 160 people were killed.He was sentenced on Friday…

A Pakistan court has sentenced Zakiur Rehman Lakhvi, a senior leader of the militant group Lashkar-e-Taiba, to five years in prison for terror financing.

Lakhvi has been accused by India and the US of orchestrating the 2008 Mumbai terror attacks, in which at least 160 people were killed.

He was sentenced on Friday to three concurrent five-year sentences.

The court found Lakhvi guilty of collecting and dispersing money for terrorist attacks by Lashkar-e-Taiba.

He was arrested on Saturday in Pakistan’s Punjab province where he was running a medical dispensary, which the state’s counter-terrorism team said he used to collect funds.

The US welcomed Lakhvi’s arrest last weekend, calling it “an important step in holding him responsible for his role in supporting terrorism and its financing”.

“We will follow his prosecution and sentencing closely and urge that he be held accountable for his involvement in the Mumbai attacks,” the US state department said on Twitter.

Pakistan-based Lashkar-e-Taiba – “Soldiers of the Pure” – rose to prominence two decades ago after carrying out armed attacks in Indian-administered Kashmir and India.

India alleges that the group was involved in an armed raid on India’s parliament in December 2001, which brought India and Pakistan to the brink of war.

Ten gunmen from the group attacked Mumbai in 2008, carrying out assaults on two luxury hotels, a train station, a hospital, a Jewish cultural centre and some other targets in Mumbai.

He was arrested in Pakistan, reportedly at a training camp for Lashkar-e-Taiba, on 7 December 2008 and jailed in 2009.

Six years later he hit the headlines again when an anti-terrorism court in Pakistan trying him for the Mumbai killings ordered his release on bail, and in April 2015 he walked free from prison.

During his more than five years in prison, Lakhvi reportedly had special treatment including uninterrupted access to guests, mobile phone use and internet access, keeping him in effective contact with the rank and file of Lashkar-e-Taiba.

Last year, the founder of Lashkar-e-Taiba, Hafiz Saeed, was also sentenced to jail in Pakistan.

Indian officials have accused Pakistan of secretly supporting the militants, and have suggested the verdicts are linked to pressure on Pakistan from the international terrorist financing watchdog, the FATF.

Pakistan is hoping to be removed from the organisation’s “grey list” at a meeting in February.