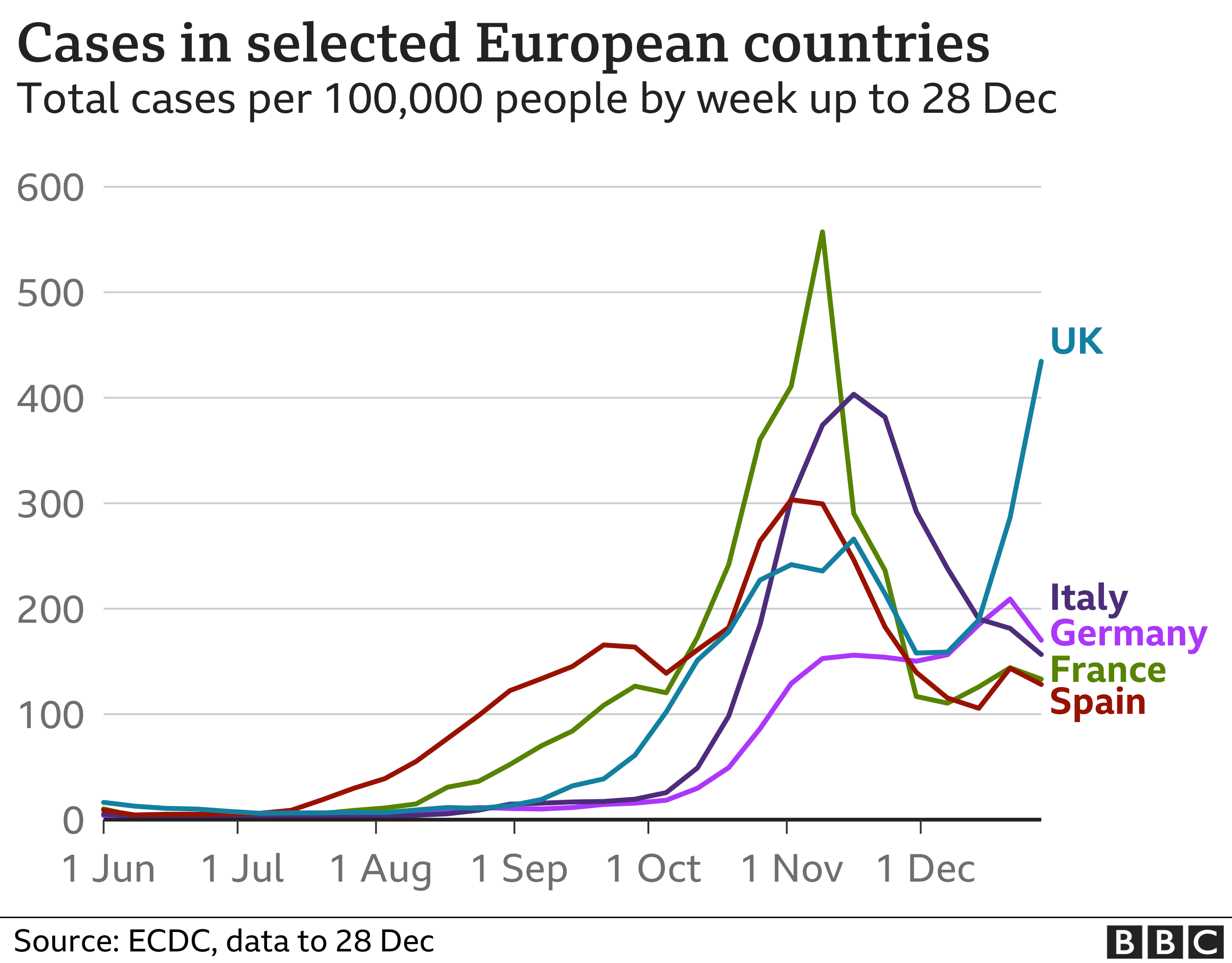 Publishedduration4 hours agoimage copyrightReutersimage captionA rise in coronavirus infections is putting pressure on hospitals across Europe during winterThe World Health Organization (WHO) has called on European countries to do more to curb a new variant of coronavirus that was first detected in the UK.WHO Europe director Hans Kluge said tougher measures were needed to “flatten…

The World Health Organization (WHO) has called on European countries to do more to curb a new variant of coronavirus that was first detected in the UK.

WHO Europe director Hans Kluge said tougher measures were needed to “flatten the steep vertical line” of rising cases in some countries.

He said 22 European countries now have cases of the variant, calling this “an alarming situation”.

First detected in November, the variant has driven a spike in cases in the UK.

Its spread has concerned many European countries that have already imposed full national lockdowns to tackle a marked rise in infections during winter.

Health experts say the variant is considerably more transmissible than previous strains but not necessarily any more dangerous for those infected.

They have also played down the possibility that vaccines will not be as effective against the variant.

However, Mr Kluge said the “increased transmissibility and similar disease severity” of the variant does “raise alarm”.

“It is our assessment that this variant of concern may, over time, replace other circulating lineages – as seen in the United Kingdom, and increasingly in Denmark,” Mr Kluge said on Thursday.

“Without increased control to slow its spread, there will be an increased impact on already stressed and pressurised health facilities.”

The appearance of the variant in south-east England triggered travel restrictions with dozens of countries in December.

Some of those restrictions have been lifted, including those imposed by France, which has been closely tracking cases of the variant in the country.

On Thursday Health Minister Olivier Veran said 19 cases of the UK variant had been identifiedin France, including two particularly worrying clusters in the greater Paris region and Brittany.

Other countries outside Europe, including Japan, Canada and Australia, have also reported cases of the variant.

What’s the coronavirus situation in Europe?

The WHO says more than 230 million people in the Europe are living in countries under full national lockdown, with more expected to announce further restrictions soon.

As of Wednesday, almost half of all European countries had recorded 150 new cases per 100 000 people over a seven-day period, according to the WHO. A quarter of all EU member states, the WHO says, “are seeing very high incidence and strained health systems”.

France lifted its national lockdown in December, but the government said the infection rate had not fallen sufficiently for a further easing.

On Thursday Prime Minister Jean Castex said restaurants, cinemas and museums would remain closed throughout January to slow the spread of the coronavirus.

A nationwide nightly curfew was being extended until at least 20 January, Mr Castex said.

The health ministry announced another 42,360 new cases over the past 48 hours.

Elsewhere, Germany has extended its nationwide lockdown until the end of January.

In Italy, restrictions imposed over the Christmas break were extended until 15 January, while in Greece the government introduced a strict lockdown from 3 January to 11 January.

Meanwhile, vaccines against Covid-19 are being rolled out across Europe, but at a pace that has been criticised as too slow in some countries.