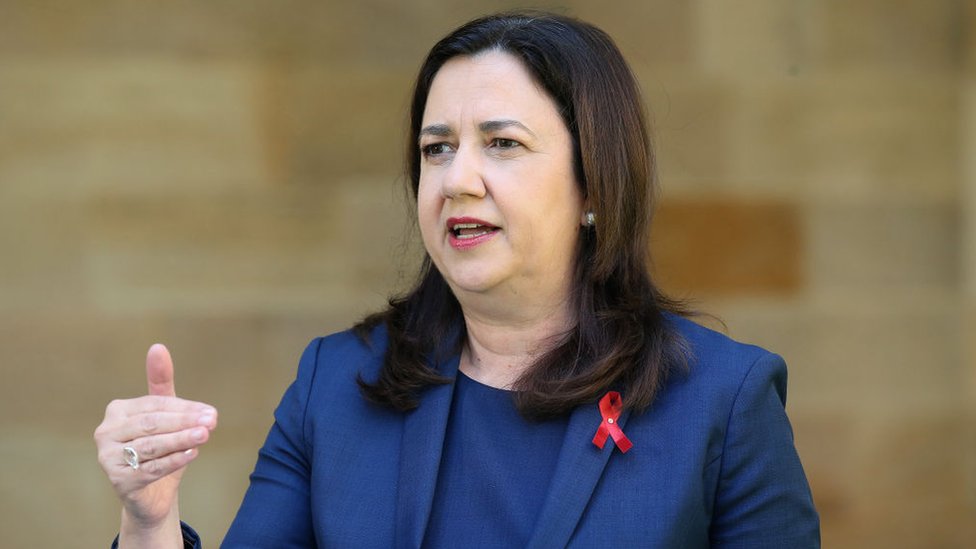 Publishedduration54 minutes agoimage copyrightGetty Imagesimage captionQueensland Premier Annastacia Palaszczuk said the move aimed to halt the virus at its sourceThe Australian city of Brisbane will enter a snap three-day lockdown after a cleaner in its hotel quarantine system became infected with coronavirus.Health officials said the cleaner had the highly transmissible UK variant and were afraid…

The Australian city of Brisbane will enter a snap three-day lockdown after a cleaner in its hotel quarantine system became infected with coronavirus.

Health officials said the cleaner had the highly transmissible UK variant and were afraid it could spread to others.

It the first known instance of this variant entering the Australian community outside of hotel quarantine.

The lockdown is for five populous council areas in Queensland’s state capital.

Ms Palaszczuk said the lockdown aimed to halt the virus as rapidly as possible, adding: “Doing three days now could avoid doing 30 days in the future.”

“I think everybody in Queensland… knows what we are seeing in the UK and other places around the world is high rates of infection from this particular strain,” she said.

“And we do not want to see that happening here in our great state.”

Australia has reported 28,500 coronavirus infections and 909 deaths since the pandemic began. By contrast, the US, which is the hardest-hit country, has recorded more than 21 million infections while nearly 362,000 people have died of the disease.

More on Covid in Australia:

The lockdown will begin at 18:00 on Friday (08:00 GMT) in the Brisbane city, Logan and the Ipswich, Moreton and Redlands local government areas.

Residents will only be allowed to leave home for certain reasons, such as buying essential items and seeking medical care.

For the first time, residents in those areas will also be required to wear masks outside of their homes.

Australia has faced sporadic outbreaks over the past year, with the most severe one in Melbourne triggering a lockdown for almost four months.

At 8:00 today I popped to the local supermarket for some bread, milk – and because it’s summer here – a mango. I was pretty much the only customer.

When I went past the same shop a couple of hours later it was a different story – 50 people standing in the drizzle – queuing to get inside as others emerged with bulging shopping bags. “Heaps busier than Christmas,” a cheery trolley attendant told me. “It’s off the scale”.

Despite the “don’t panic” messages from authorities, pictures on social media show it’s a pattern being repeated across the city.

While shutdowns are common around the world, the tough and sudden stay-at-home order for Brisbane has caught people on the hop here after months of near normality.

But while such a rapid, hard lockdown off the back of just a single case of Covid-19 will seem crazy in some parts of the world, I’ve not come across too many people complaining.

And I don’t think that’s just because Aussies love to follow a rule. This is the first time the UK variant of the virus has been detected in the community in Australia.

And nobody here wants Brisbane to go through what Melbourne suffered last year. Even if it means going without mangoes.