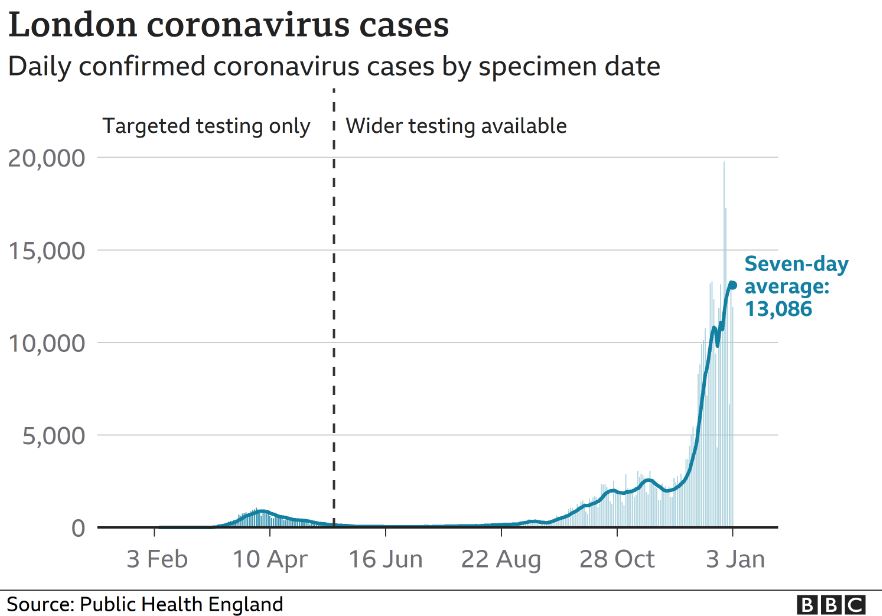 Publishedduration25 minutes agomedia captionLondon mayor Sadiq Khan: “Unless the virus reduces… we could run out of beds”The spread of Covid in London is “out of control” according to Sadiq Khan, who has declared a “major incident”. The coronavirus infection rate in London has exceeded 1,000 per 100,000 people, based on the latest figures from Public…

The spread of Covid in London is “out of control” according to Sadiq Khan, who has declared a “major incident”.

The coronavirus infection rate in London has exceeded 1,000 per 100,000 people, based on the latest figures from Public Health England.

However, the Office for National Statistics recently estimated as many as 1 in 30 Londoners has coronavirus.

Mr Khan told BBC political reporter Karl Mercer that the figure is as high as 1 in 20 in some parts of London.

Major incidents have previously been called for the Grenfell Tower fire in June 2017 and the terror attacks at Westminster Bridge and London Bridge.

A major incident is any emergency that requires the implementation of special arrangements by one or all of the emergency services, the NHS or the local authority.

It means the emergency services and hospitals cannot guarantee their normal level of response.

Currently, there are more than 7,000 people in hospital with Covid-19, the mayor said.

This is a 35% increase compared to last April’s peak of the pandemic, he added.

An analysis of Public Health England figures show in the week to 3 January, the number of cases rose across all of the London’s boroughs compared with the previous week, with 17 individually recording more than 1,000 cases per 100,000 people.

Testing increased in parts of the city after a drop over the Christmas period but positivity was high among people taking lab-based tests – suggesting more testing is needed to find undiagnosed cases in the community.

In the last week, many parts of the capital saw a rise in deaths where a person had tested positive for coronavirus in the previous 28 days – with some areas recording more than double the number of deaths on the previous week.

However, reporting over the Christmas period may have affected this.

Out of the 18 acute hospital trusts in London providing figures to the government, all of them recorded having more beds being filled by coronavirus patients than in the previous week.

Barts NHS Health, one of London’s largest trusts, saw a 30% increase in coronavirus patients between 29 December and 5 January, to 830.

The mayor of London’s announcement comes after the counties of Sussex and Surrey declared similar major incidents on Thursday.

He said the London Ambulance Service was currently taking up to 8,000 emergency calls a day, compared to 5,500 on a typical busy day.

The London Fire Brigade said more than 100 firefighters had been drafted in to drive ambulances to help cope with the demand.

London’s regional director for Public Health England Kevin Fenton said the current wave of coronavirus was “the biggest threat” the capital has faced in this pandemic to date.

He added: “The emergence of the new variant means we are setting record case rates at almost double the national average, with at least one in 30 people now thought to be carrying the virus.

“We know this will sadly lead to large numbers of deaths, so strong and immediate action is needed.”

Mr Khan is warning that London is “at crisis point”.

“If we do not take immediate action now, our NHS could be overwhelmed and more people will die,” he said.

“Londoners continue to make huge sacrifices and I am today imploring them to please stay at home unless it is absolutely necessary for you to leave. Stay at home to protect yourself, your family, friends and other Londoners and to protect our NHS.”

He said he had written to Prime Minister Boris Johnson asking for more financial support for Londoners who need to self-isolate and are unable to work, and for daily vaccination data.

The mayor of London was in a sombre mood when I spoke to him earlier this afternoon. One in 20 Londoners in some areas now has Covid, and there is a real fear that hospitals will simply be overwhelmed in the next two weeks.

Declaring a major incident is a real indication of the levels of concern felt not just at City Hall but across London’s emergency services and the NHS.

More Londoners are now in hospital with coronavirus than at the peak of the first wave last April – and those numbers are growing by more than 800 every day.

It’s believed the last mayor to declare a London-wide major incident was Boris Johnson in response to the 2011 riots.

The man who replaced him at City Hall has now written to the prime minister asking him to enforce mask-wearing in all busy public spaces, and to ban public worship.

The coming days will be some of the most challenging in the city’s recent history.

She added: “One in 30 Londoners now has Covid. This is why public services across London are urging all Londoners to please stay at home except for absolutely essential shopping and exercise.

“This is a dark and difficult time for our city but there is light at end of the tunnel with the vaccine rollout. We are asking Londoners to come together one last time to stop the spread – lives really do depend on it.”

Earlier this week as the prime minister introduced an England-wide lockdown, the Met Police said officers were going to be “more inquisitive” towards Londoners seen outside.

The Met handed out 1,761 fines for breaches of coronavirus laws between 27 March and 20 December.

Deputy Assistant Commissioner Matt Twist said the major incident was a “stark reminder” of the point London is at in the pandemic.

He said: “These rule-breakers cannot continue to feign ignorance of the risk that this virus poses or listen to the false information and lies that some promote downplaying the dangers.

“Every time the virus spreads it increases the risk of someone needlessly losing their life.”

Have any of the issues raised in this article had an impact on you? You can share your experiences by emailing haveyoursay@bbc.co.uk.