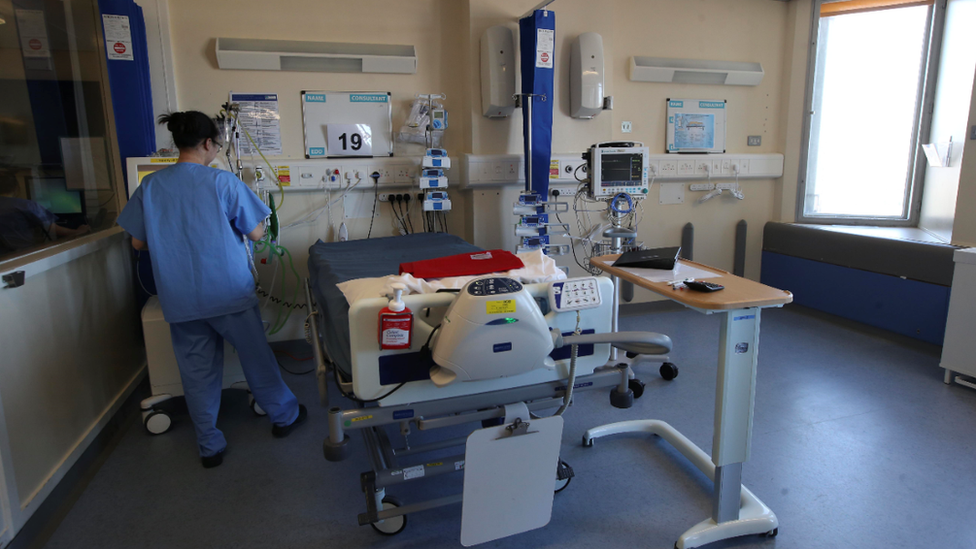 By Marie-Louise ConnollyBBC News NI Health CorrespondentPublishedduration1 hour agoThe Belfast Health Trust has said it has no other option but to cancel urgent cancer surgery. These are known as red flag cancer cases where an operation is expected to impact on a person’s recovery and even surviving the disease. The Department of Health has confirmed…

The Belfast Health Trust has said it has no other option but to cancel urgent cancer surgery.

These are known as red flag cancer cases where an operation is expected to impact on a person’s recovery and even surviving the disease.

The Department of Health has confirmed to the BBC that it’s estimated that one in 60 people in NI have Covid-19.

It is understood the trust expects “many 100s” of new Covid patients in the next three weeks.

The demand for bed space is described as “highly significant”, while a source added that all is being done to “find beds and staff”.

They continued: “People in here are moving heaven and earth to find beds in anticipation of what is coming and that’s why some cancer patients even those who have been told their case is urgent are having their surgery cancelled.”

Effectively the move means that choices are already being made within the health service about who should receive critical treatment.

The daughter of a 66-year-old woman who was told her surgery has been cancelled has described the move as “deeply worrying”.

“Mummy was diagnosed with cancer of the lining of the bladder in November, it’s since spread to the muscle wall of her bladder. She was told in December her surgery was urgent – but now it’s been cancelled.

“She is so frightened, it is just horrendous and I’m sure mum is not alone.”

While a cancer patient might have been told their case is critical and that treatment is necessary within weeks, some Covid patients are also being told that in order to survive they require treatment immediately.

With the number of cases soaring this is worse than the first lockdown and according to health professionals there is worse to come.

The BBC understands that the health minister is expected to respond to the problem in the coming days.

It is hoped that he will announce a regional approach to tackling cancelled surgeries among the various health trusts.

Northern Ireland’s other health trusts have also begun to cancel operations due to pressures created by coronavirus.

The Northern, Western and South-Eastern trusts have said they will be cancelling planned surgeries.

On Thursday, 599 people were in hospital with Covid-19.

The Belfast Trust apologised for the “distress” caused by the cancellations.

“Belfast Trust has made the difficult decision to cancel all planned inpatient surgery this week due to rising numbers of Covid cases,” a spokesperson said.

The trust said it was contacting those affected and “will rearrange this surgery as soon as possible and we will do everything we can to ensure continuity of care throughout this challenging time”.

The Northern Trust said it had “regrettably” cancelled the majority of its planned or elective surgeries to “both free up staff to support the significant COVID-19 surge experience in the Trust and to reduce the clinical risk to patients who are or may be exposed to the virus”.

It apologised and said it would contacting people.

The Western Trust said it is “facing unprecedented pressures due to the escalating rate” of Covid infections.

She said the decision was “very regrettable, but necessary”.

“Red flag and some time critical procedures and clinics will continue, but will be reviewed daily,” she said.

Should the number of Covid patients further increase, she added, the trust will “have no option but to move to perform emergency and trauma surgery only”.

A spokesperson for the South Eastern Trust said it was still carrying out some planned surgery, but the majority would be cancelled by next week.

Of the 3,359 planned procedures scheduled between 29 December 2020 and 4 January, 3,267 went ahead as planned, according to the Health and Social Care website.

There were 92 cancellations which amounted to about 3% of all surgeries.