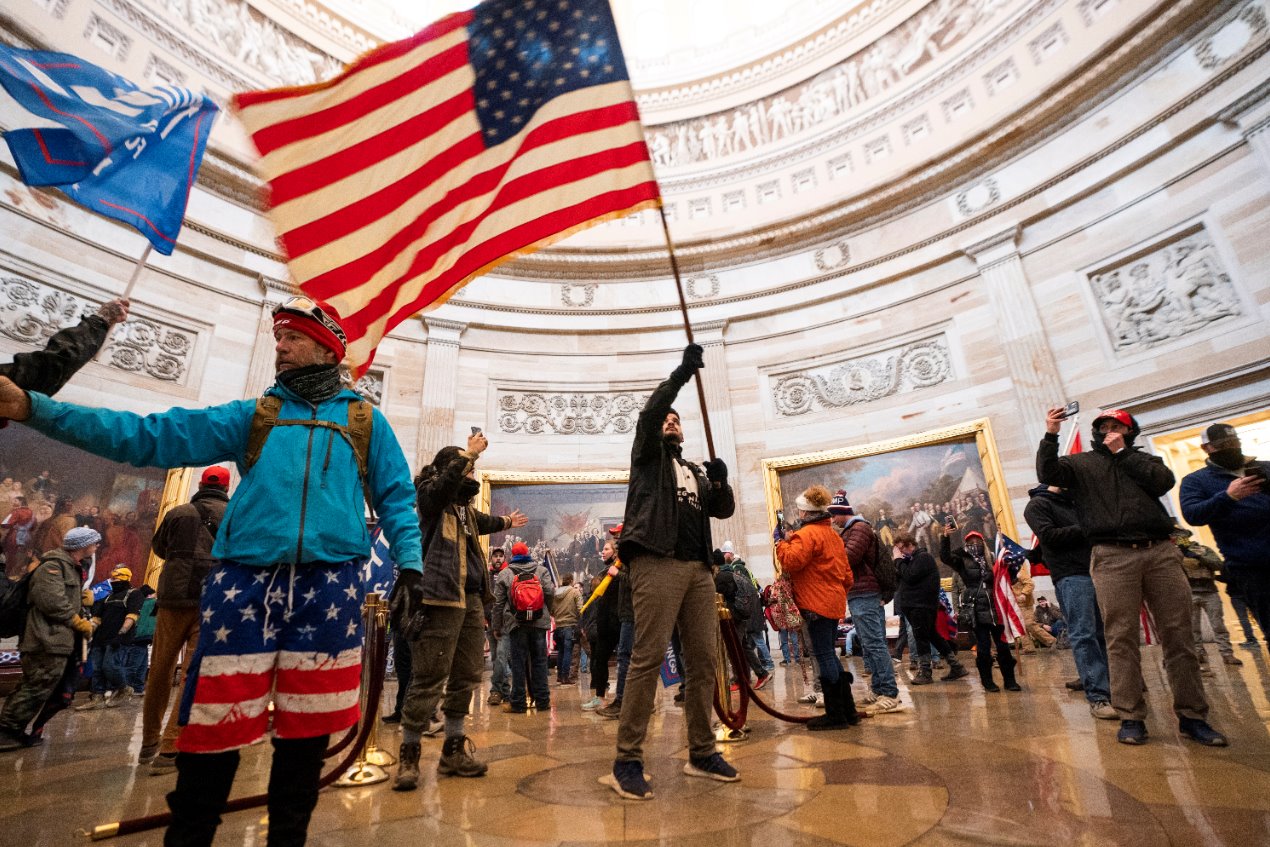 Publishedduration2 hours agoimage copyrightEPAimage captionFour people died and dozens of officers were injured in spiralling violenceWith the country still reeling from Wednesday’s violence in Washington, serious questions are now being asked about how such a massive security breach was able to happen at the heart of US government.Many consider it incomprehensible that thousands of pro-Trump…

With the country still reeling from Wednesday’s violence in Washington, serious questions are now being asked about how such a massive security breach was able to happen at the heart of US government.

Many consider it incomprehensible that thousands of pro-Trump supporters were able to force their way inside one of the country’s most historically and politically significant buildings at a time when elected lawmakers were inside moving to certify Joe Biden’s election victory.

Photographs and footage showed the extent to which the mob were able to roam around inside. Scores of Trump supporters were seen taking photographs and live-streaming their actions – with many looting and vandalising symbols of US democracy as they went.

As the events unfolded live online and on news networks across the world, many questioned the preparedness and response of the US Capitol Police – a force of about 2,000 officers whose job it is to protect the building and its grounds.

The breach meant some lawmakers were forced to shelter on the floor before being evacuated to safety wearing gasmasks. It then took hours for the complex to be cleared of rioters and declared secure.

And despite the severity and scale of the chaos unleashed by the crowds, relatively few arrests had been made by nightfall Wednesday.

What are the alleged security failures?

Criticism centres on the apparent under-preparedness of police.

Hours into the violence, some protesters were filmed being escorted or guided out the building without arrest – even appearing to be helped down the Capitol stairs and having doors held open for them to exit. Another viral clip appeared to show a police officer posing for a selfie with a man inside.

Nick Ochs, a known member of the Proud Boys far-right group, tweeted a selfie of himself inside and later told CNN: “There were thousands of people in there – they had no control of the situation. I didn’t get stopped or questioned.”

One smirking rioter was pictured, his face uncovered, with his feet up on House Speaker Nancy Pelosi’s desk before exiting to show off a letter he appeared to have stolen from her office.

A Confederate flag was paraded over the shoulder of one unmasked man and a well-known conspiracy theorist – wearing horns, fur and facepaint – was seen posing by a Senate chair occupied by Vice President Mike Pence just hours earlier.

What have politicians said about the police?

Now a number of US lawmakers have forced the departures of top officials they hold responsible.

And Speaker Nancy Pelosi said that House Sergeant-at-Arms Paul Irving will be resigning.

Even as violence escalated, there was confusion about when and if other security forces were being deployed to help.

If true, this is a complete contrast to the highly visible show of force the president called for last year as Black Lives Matter (BLM) protests spread across the country, with protesters and looters alike met with heavy barrages of tear gas and rubber bullets.

Gordon Corera, the BBC’s security correspondent, says this emphasises how security decisions appear to have become politicised under the Trump administration.

“One that let extremists storm the US Capitol yesterday, and another that released tear gas on peaceful protesters last summer. It’s simply unacceptable.”

Professor Clifford Stott, a specialist in the policing of crowds who works as an adviser to the UK government, says questions will be raised by the “significant and highly embarrassing police failures” seen in Washington on Wednesday.

Prof Stott is currently doing work analysing the police response around BLM protests in Seattle and says – even taking into account the complex structure of policing in the capital – there appears to have been a lack of preparation for any escalation by Trump supporters.

“It was the failure to predict that that led them to be inadequately prepared for when it did happen,” he told the BBC.

He went on: “It’s not just about the complexities of the police response, it’s also about what appears to be a poor level of risk assessments around how they understand whether resources might be necessary in the first place.”

How have police responded to the criticism?

On Thursday the chief of the US Capitol Police confirmed more than 50 law enforcement officers had been injured and described his force and partners as responding “valiantly” when faced with thousands.

“The violent attack on the US Capitol was unlike any I have ever experienced in my 30 years in law enforcement here in Washington DC,” said Chief Steven Sund.

In the same statement, he said that the USCP was conducting a thorough review of events – including their security planning procedures.

What was known in advance of violence?

The gathering of the president’s supporters, timed to prevent Congress certifying the election result, was not spontaneous. The protest was pre-planned and followed months of escalating rhetoric from President Trump and some of his Republican allies seeking to undermine the result.

Prof Stott, who is known his research on the psychology of group violence and hooliganism, told the BBC he found the overarching mood of “joy” among rioters openly committing crimes particularly interesting.

“There was a very clear purpose to that crowd and that was driven by the idea their actions were legitimate, given their perception that their president – as their commander in chief – had sanctioned them to go and do this,” he says.

“And that sense that Capitol Hill itself had been over taken by corruption.”

In the days (and indeed weeks and months) before the attack, people monitoring online platforms used by extreme pro-Trump supporters and far-right groups had warned of rhetoric encouraging violence at the Capitol, including toward lawmakers, over the election result.

Some of the Trump supporters in Washington DC were even pictured wearing clothing made for the occasion with “MAGA: CIVIL WAR” printed alongside the 6 January 2021 date.

Will the rioters face legal action?

Vice-President Mike Pence is among those who have called for those involved to be prosecuted to the fullest extent of the law.

And given the brazen behaviour of many involved and the amount of footage around, there would be no shortage of evidence for prosecutors to draw from.

As Facebook moved to remove videos seen to incite or encourage the events, some open-source investigators called for people to archive evidence to help with crowdsourced identification – though many seen in viral images from inside are already known figures within far-right groups and QAnon and related conspiracy networks.

The Capitol Police confirmed Thursday they were reviewing surveillance and other material to identify others “who may be subject to criminal charges”.

Legal experts have speculated that some of those involved could face the serious and rare charge of seditious conspiracy – a federal crime which can carry 20 years in prison.